Log in
Sign Up
for Teachers for Schools for Working Scholars for College Credit
Free Practice Test Instructions:

If the following sentence is passive, make it active by choosing the most fitting answer below. If it's active, choose 'No change.'

The executive order had been sent by the President to the Joint Chiefs.

Question 3 3. Which transition would signal to your readers that an opposing viewpoint is about to be explored?

Question 4 4. Why is the thesis statement such an important element of any essay?

Question 6 6. According to the product property, you can use ______ to combine two logarithms that are separated by addition.

Question 8 8. Tom is guiding a group of his students through a big picture reading of Romeo and Juliet. Which of the scenarios below should NOT be included as part of this guided reading?

Question 11 11. What does x' equal in the following equation:

A scientist tested the action of a new antibiotic drug, Drug A, by placing the drug in a petri dish smeared with bacteria and observing how large of an area the antibiotic can clear. The larger the radius of the cleared area, the more powerful the drug is against that particular strain of bacteria. The table below shows the effectiveness of the drug against several different bacterial strains.

In general, was this antibiotic more effective against gram-positive or gram-negative bacteria? 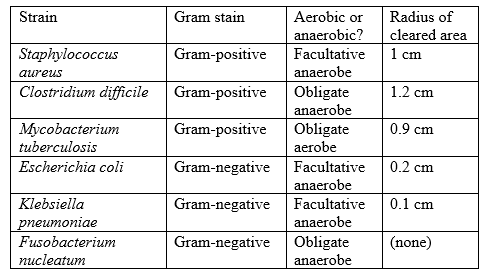 Question 13 13. The local bowling team plays in a 7-team league where each team plays other teams 4 times in a season. How many different games will be played in a season?

Question 14 14. How many pairs of equal opposite angles are needed to prove a shape is a parallelogram?

Question 15 15. For which of the following trinomials can completing the square be done without having to do any extra work on it?

I am a teacher