Question 1 1. What does 'deshielding' mean in the context of NMR spectroscopy?

Question 2 2. What does the area under each set of peaks (called a multiplet) in a 1 H NMR spectrum tell us?

Question 3 3. An unknown molecule has a quartet and a doublet in its 1 H NMR spectrum. How many chemically distinct H atoms does the molecule have?

Question 4 4. What is the likely identity of the molecule given this 1 H NMR spectrum? The peak on the far right is tetramethylsilane, and the other two peaks have equal areas. 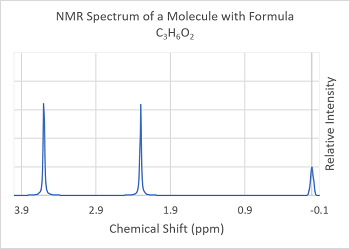 Question 6 6. Carbon-13 NMR spectra are collected when decoupled from Hydrogen-1 nuclei to _____.

Question 8 8. Integration of the area beneath an absorption peak tells you the _____.

Question 9 9. If you were to take ALL of the integration values from the 1H-NMR spectrum of ethyl acetate and add them together, what would be the TOTAL number of hydrogens you would get?

Question 10 10. How many peaks or signals would you expect to observe in the 1H-NMR spectrum of ethyl acetate?

Question 11 11. What type of solvent must an NMR sample be run in?

Question 12 12. How many peaks or signals would you expect to observe in the C-13 NMR spectrum of ethyl acetate?

Question 14 14. Which of the following molecules will have a C=O peak at the lowest frequency (energy) in the IR spectrum?

Question 17 17. If you have determined, from the IR spectrum, that a molecule contains a carboxylic acid and alkanes, what will you do next to determine what the exact molecule is?

Question 18 18. How are greenhouse gases (such as water vapor and carbon dioxide) related to infrared radiation?

Question 20 20. What can you tell me about the following molecule based on the IR spectrum? 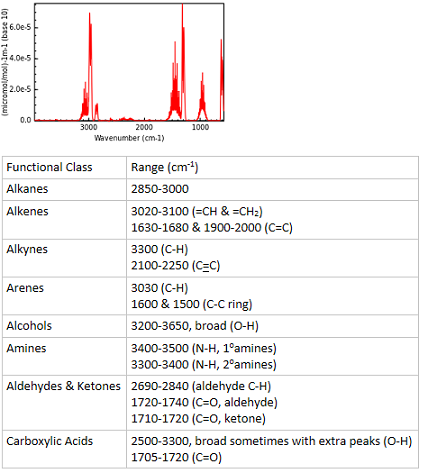 Question 21 21. In the mass spectrum for an atom of a certain element, a peak is observed at m/z = 127.01 amu. Which element is most likely responsible for this peak?

Question 22 22. The precise molecular mass of a molecular ion was determined by adding up the average atomic masses of the elements that compose the ion (that is, using the atomic masses given on the Periodic Table). Why might the measured mass-to-charge ratio from a mass spectrometer not be exactly equal to the determined value (assume that the instrument is perfectly accurate)?

Question 23 23. What is the molecular mass for a naturally occurring sample of CO2?

Question 24 24. Why can we not simply add the number of protons and neutrons for an element to determine its mass?

Question 25 25. Which identification method would you utilize if you only wanted to know the functional group of an organic molecule?

Question 26 26. If you were asked to collect data that would allow you to determine the carbon-hydrogen framework of an organic compound, which identification technique would you use?

Question 27 27. If you were told that a particular signal in a proton NMR spectrum was split three times, how many hydrogens on the neighboring carbon would have to be present according to the n+1 rule?

Question 28 28. Which instrumentation technique has the ability to tell you the molecular weight of an organic compound?

Question 29 29. In the molecule CH3 CH2 CO2 H, which hydrogen atom(s) will have the greatest chemical shift in the proton NMR spectrum?

Question 30 30. More milligrams of a substance with a high molecular weight must be added to an NMR sample because: