Choose your answers to the questions and click 'Next' to see the next set of questions. You can skip questions if you would like and come back to them later with the "Go To First Skipped Question" button. When you have completed the practice exam, a green submit button will appear. Click it to see your results. Good luck!

Question 1 1. Which of the following is NOT an example of polygenic inheritance?

Question 2 2. The traits in polygenic inheritance can be described as _____.

Question 3 3. Two aberrant cells are found in the dividing skin tissue of an otherwise normal human. One cell has only one copy of chromosome 16, while the other has three copies. The cause of these aberrant cells is most likely due to _____.

Question 4 4. The failure of linked homologs or chromatids to separate during anaphase of mitosis or meiosis is known as _____.

Question 5 5. What is the most likely type of inheritance for the genetic condition shown in this pedigree? 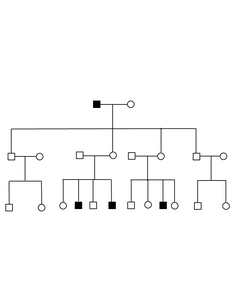 Question 6 6. A criss-cross inheritance pattern is seen in what type of genetic inheritance?

Question 7 7. Tay-Sachs disease is caused by:

Question 10 10. All of the following statements are correct EXCEPT:

Question 11 11. The best term to describe the incorporation of a random mistake into the DNA sequence at a specific point is _____.

Question 13 13. If the diploid chromosome count in humans is 46, how many pairs of homologous chromosomes are there?

Question 15 15. This test takes a sample of amniotic fluid:

Question 16 16. This is a test that takes a sample of the placenta:

Question 17 17. A scientist is studying an animal and determines that a gene is located on autosome two. It controls antler production in the male animals. Note that females do not produce antlers. This is an example of a:

Question 19 19. Which type of mutations can result in a frameshift?

Question 20 20. How does a frameshift mutation in the gene coding for the enzyme, hexosaminidase A, result in Tay-Sachs disease?

Question 21 21. Which of these terms accurately describes Alzheimer's disease?

Question 22 22. When collecting samples to study the genetics of a complex disease, which of the following factors would you NOT want to be equally represented in both the affected and unaffected groups?

Question 23 23. Which of the following is caused by a mutation in an autosomal gene?

Question 24 24. How are genetic mutations related to genetic disorders?

Question 25 25. The experiments of Nilsson-Ehle involving wheat plants were an example of which genetic relationship?

Question 26 26. A situation in which an otherwise diploid cell has three copies of a particular chromosome is known as _____.

Question 27 27. If this is a pedigree for a family with a history of hemophilia, which is a sex-linked condition, what do we know about the proband's mother? 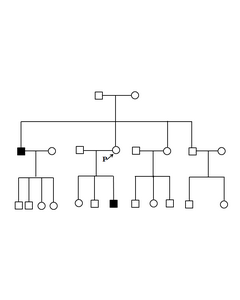 Question 28 28. Suppose you performed a cross with two flies that were heterozygous for purple eyes. The purple color allele is dominant to the black color allele. Which of the following possible results would NOT suggest that the organisms carried a recessive lethal allele?

Choose your answers to the questions and click 'Next' to see the next set of questions. You can skip questions if you would like and come back to them later with the "Go To First Skipped Question" button. When you have completed the practice exam, a green submit button will appear. Click it to see your results. Good luck!