Question 2 2. Which of the following is NOT a property of a random variable?

Question 3 3. What is information that is collected for analysis?

Question 4 4. What is data that is grouped in evenly distributed values and measured based on the group to which the variable is attributed?

Question 5 5. When data is visually displayed in a way that misleads from an accurate interpretation, what is it called?

Question 6 6. Questions that encourage the answer the researcher expects are known as _____ questions.

Question 7 7. What is statistical estimation?

Question 8 8. Which two are examples of descriptive statistics?

Question 9 9. When you find a relationship in bivariate data, you are looking at a positive or a negative _____.

Question 10 10. A scientist is conducting an experiment on mice, seeing how their weight is affected by the volume of cheese they're given. What is the independent variable in this experiment, and why?

Question 12 12. How are descriptive statistics used?

Question 14 14. Looking at the chart of qualitative variables below, what type of variable is 'Education'?

Question 15 15. A political group invites people in the local communities to participate in a survey about prayer in schools. This is an example of:

Question 16 16. Why is it important to avoid a non-representative sample when conducting a survey?

Question 18 18. COUNT, SUM and AVERAGE are all examples of what element in a formula?

Question 19 19. Which is the type of computer software that limits the amount of computers on which it may be installed?

Question 20 20. Which of the following is not part of visual analytics?

Question 21 21. Variables are collected in the form of data. What are the two major forms of data?

Question 23 23. You conduct an experiment where you want to measure the number of rolls it takes to get two 6's in a row when you roll a fair six-sided die. State whether the random variable is discrete or continuous and give a summary of its values.

Question 25 25. Sally Sue is filling out a survey about health and fitness. One question asks about her height and weight. She responds with her real height, but puts a weight that is ten pounds lighter than what she really weighs. What is this an example of, and why?

Question 26 26. How do descriptive and inferential statistics differ?

Question 27 27. What type of data uses two sets of variables that can change and are compared to find relationships?

Question 28 28. What is an example of probability?

Question 29 29. Looking at the data given for the Rating variable, what type of variable is being used? 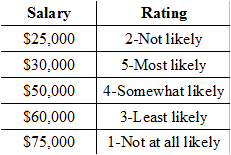 Question 30 30. In a survey, people on average responded that they floss seven times a week despite the fact that the actual averages are drastically lower. Which form of bias likely accounts for this discrepancy?