Question 1 1. After the acceptance of Christianity as a legitimate religion, how did the Church alter Western culture?

Question 2 2. What was the eventual outcome of the resurgence of classic learning as promoted through the use of classical texts?

Question 3 3. What is the belief that the Holy Trinity are all made from the same being?

Question 4 4. As Europe descended into the Dark Ages, how was its Classical culture preserved?

Question 5 5. Why did Rome's economy strongly suffer when it was attacked by foreign invaders?

Question 6 6. The Abbasid family brought Islam to a 'Golden Age' but would ultimately be defeated at the hands of the _____.

Question 7 7. Which of the following features is NOT common to both Byzantine and Early Christian churches?

Question 8 8. Which world faith was NOT practiced in the Middle East when Mohammed was born?

Question 9 9. What is the belief that the beings in the Holy Trinity are separate but formed from a similar substance?

Question 10 10. Like Early Christians, the Byzantines created their mosaics out of

Question 11 11. The Semitic peoples of the Middle East claimed to be descendants of _____.

Question 12 12. Art historians refer to art of the Irish Golden Age as

Question 14 14. When a person purposely destroys property, which Germanic tribe are they acting like?

Question 15 15. We can trace the roots of Insular art to

Question 16 16. Someone who converts to Islam must make the Shahada, which is the _____ that is the first pillar of Islam.

Question 17 17. Why did Rome suffer a grain shortage during the Visigoth attack?

Question 18 18. Why were the Salian Franks able to form the Merovingian Dynasty?

Question 19 19. Your best friend is a Muslim who is setting out on a pilgrimage to the city of Mecca. This sort of religious pilgrimage is known as the _____; it is required of all devout and able-bodied Muslims as one the Five Pillars of Islam. 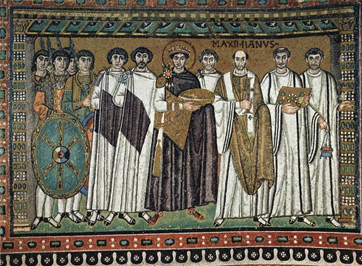 Question 21 21. Why do we see such a tight blending of imperial and religious symbolism in Byzantine art?

Question 22 22. You can identify an Eastern Orthodox religious icon by which of the following characteristics?

Question 23 23. How did the Abbasid Caliphate promote a thriving culture within their empire?

Question 24 24. Which of the following was NOT a result of Clovis' conversion to Catholicism?

Question 25 25. How did architects create elements in the dome of Hagia Sophia (in Istanbul) that float higher than any previous dome?

Question 26 26. Sarah's family is hosting a party on Christmas day. Sarah would like to invite a friend from school to join in the celebration, but her friend is a Muslim. What commonality do Sarah and her friend share that might make this invite particularly appropriate?

Question 27 27. What advantage did Romans have that Europeans in the Dark Ages didn't?

Question 28 28. It is difficult to speak definitively about Byzantine art because

Question 29 29. How did the Anglo-Saxons differ from the Franks?

Question 30 30. Which statement correctly assesses the impact of the Germanic invasions into the Roman Empire?