Question 1 1. Economists recognize that the economy doesn't grow smoothly, but in regular patterns. Which of these terms best describes this?

Question 2 2. According to this chart, what was the unemployment rate during the peak of the business cycle?

Question 3 3. Prices for most things in the US are determined by:

Question 4 4. What is the term for the concept that you can buy anything you want as long as you have the money?

Question 5 5. The rate banks pay to borrow money from the Fed is called the _____ rate.

Question 6 6. The Federal Reserve controls the growth rate of the money supply through _____.

Question 7 7. _____ reduce the amount of taxable income a business has to report.

Question 8 8. Sunshine Solar receives a $2,000 reduction on its federal taxes for each solar-energy installation it performs. This is an example of a _____.

Question 9 9. Which of the following is NOT a benefit of specialization and exchange?

Question 11 11. Jane is a presidential adviser in the time of the 2008 Global Economic Crisis. The president is asking her if he should use fiscal policy in an attempt to combat the effects of the crisis. Why does she likely tell him yes?

Question 12 12. If the government wants to pull the country out of a period of heavy recession they should do all of the following EXCEPT:

Question 13 13. Economic interdependence is primarily a phenomenon affecting what type of nations?

Question 14 14. Economic interdependence is a product of what phenomenon?

Question 15 15. Which of the following does NOT contribute to a larger economy?

Question 16 16. Which of the following is the main measure of the size of an economy?

Question 17 17. Overregulation is usually a result of the government wishing to promote _____.

Question 18 18. Which of the following is an example of an efficiency goal?

Question 19 19. The Federal Reserve has noticed that expenditures are decreasing and that the number of loans requested has decreased significantly. What will they aim to do to increase the number of loan requests?

Question 20 20. Which of the following is NOT true about how the government protects the U.S. economy?

Question 21 21. What is defined as the bringing in of foreign goods into an economy?

Question 22 22. What is defined as the economic mixing and interdependence of economies across the world through an escalation of cross-cultural movement of goods, services, technologies and wealth?

Question 23 23. If Jim can make 8 TV shows and Sam can make 4 TV shows, who has the absolute advantage?

Question 24 24. What is specialization?

Question 25 25. What happens to real GDP, prices and unemployment at the peak of a business cycle?

Question 26 26. Which of these is a feature of a command economy?

Question 27 27. The incentive that banks offer in return for use of a depositor's money is called _____.

Question 28 28. What is a government MOST likely to do to protect the interests of agricultural businesses?

Question 29 29. According to the two production possibility curves shown, Country A should specialize in the production of which of the following? 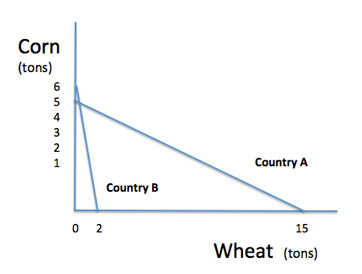 Question 30 30. The federal government's use of taxation and spending policies to affect overall business activity is called _____.