Question 1 1. Prebiotic, water-filled structures that are defined by a lipid bilayer are known as

Question 2 2. Which of the following is NOT evidence for the endosymbiosis theory?

Question 4 4. Miller and Urey used all of the following substances to simulate Earth's early atmosphere EXCEPT _____.

Question 5 5. Which of the following statements about patterns or processes in the evolution of life is false?

Question 6 6. The half-life of an isotope is the

Question 7 7. The idea that the earth is constantly changing and, therefore, life on earth is continually evolving is:

Question 8 8. What type of event separates the Paleozoic, Mesozoic, and Cenozoic eras from one another in the Phanerozoic eon?

Question 9 9. The Archean and Proterozoic eons are grouped together as the:

Question 10 10. During which geological period did Pangaea became fully divided and distinctive assemblages of plants and animals begin to arise on different continents?

Question 11 11. What method is used to determine the specific age of a rock or fossil?

Question 13 13. Life is thought to have originated

Question 14 14. An important factor contributing to the evolution of diversity among animals is the considerable variation in their

Question 15 15. What scientist is credited with the idea that early life on Earth formed through a series of reactions that made simple compounds gradually more complex?

Question 16 16. Despite being incomplete as a whole, the fossil record is rather detailed for

Question 17 17. Mountain ranges are ultimately the result of

Question 18 18. Which answer choice correctly orders the three major eons of Earth's history, from the oldest to the most recent?

Question 19 19. Which of the following best describes an endosymbiont?

Question 20 20. One of the first steps leading to a cell that could reproduce may have been the formation of protocells. What characteristics may have allowed protocells to be the precursors to the living cell?

Question 21 21. How old do most scientists think Earth is?

Question 22 22. On the Galapagos Islands, there are several species that are similar and resemble a common ancestor. Each island has a slightly different ecosystem. Which of the following best explains how these different species came to be?

Question 24 24. Scientists have found fossils that show a sudden appearance of a new organism after a period of no change. Which form of evolutionary change best explains this?

Question 25 25. Which of the following theories best explains the mass extinction of the dinosaurs?

Question 26 26. Cells that are simple and contain no membrane bound organelles are called:

Question 28 28. Small, non-living droplets that can regulate their internal environments are best known as _____

Question 29 29. The time period in Earth's history that saw the greatest increase in both the number and diversity of species is the:

Question 30 30. What is the purpose of the device shown? 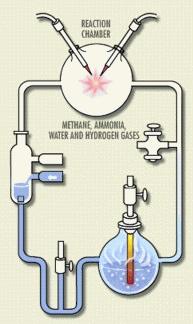 The Origin and History of Life On Earth Chapter Exam Instructions