View bio
Learn about the 10th Amendment to the US Constitution, the final amendment found in the Bill of Rights. Discover when it was included in the constitution and what it says. Explore how the 10th Amendment negotiates federal powers vs. state powers. Updated: 12/27/2021
Create an account

Do you ever get tired of your parents or your teachers telling you what to do? It can be very frustrating when you don't have a chance to make decisions for yourself. Early Americans wanted to make sure states and the American people didn't feel this way, so they passed the 10th Amendment.

The powers not delegated to the United States by the Constitution, nor prohibited by it to the States, are reserved to the States respectively, or to the people.

The 10th Amendment says that any power or right not specifically listed in the Constitution as belonging to the federal government belongs to individual states or the American people themselves. The federal government of the United States is made up of people from all over the country. It includes the President, Congress, and Supreme Court. State governments are made up of people from only that state. They include the state's governor, courts, and a law-making body. 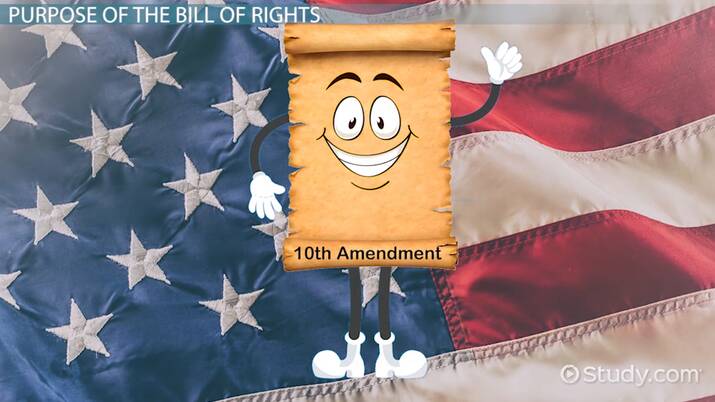 Coming up next: 7th Amendment: Lesson for Kids

The 10th Amendment makes sure that our country keeps working through federalism. Federalism in the United States means the country is governed through two different groups: the federal government and individual state governments. In federalism, the federal government is in charge and is given many powers. It has authority over the individual state governments. However, because of the 10th Amendment, there are some powers that still belong to the states.

On the other hand, the Constitution directly states that only the federal government, specifically Congress, can declare war. This means that the state of Minnesota can't declare war on a neighboring state or country. Sorry Minnesota, but you have to take a deep breath and count to 10!

Purpose of the Bill of Rights

The idea of protecting certain rights was important even before America came to be. During the Revolutionary War, the 13 colonies recognized the importance of fighting Britain together. However, each colony had its own way of running itself including money, government, and military. This led to some difficulties when the colonies, now states, tried to form a single nation.

Just like parents get frustrated when brothers and sisters argue with each other, the writers of the Constitution and the Bill of Rights wanted to make sure that the federal government and state governments would get along. By defining who is in charge in different circumstances, the 10th Amendment helps keep the United States of America running smoothly.

All right, let's take a moment to review what we've learned. In this lesson, we learned about a very important part of the Bill of Rights, which is the formal name for the first 10 amendments to the Constitutions of the United States. Specifically, we learned about the 10th Amendment. It states that any powers or rights not listed as belonging to the federal government then belong to the states and the American people. This ensures the American people's ability to possess reserved powers, since they aren't specifically assigned to the federal government. Most importantly, though, the 10th Amendment ensures that America continues to operate smoothly under federalism, which means the country is governed through two different groups: the federal government and individual state governments.

Prompts About the 10th Amendment:

Make a set of flashcards that provides the definitions of each of the terms that are in bold from the lesson (Bill of Rights, 10th Amendment, federalism, reserved powers).

Example: Federalism means that the federal government and the state governments work together to govern the nation.

Create a chart, poster, or some other type of graphic organizer that depicts the federal government and a state government, being sure to list who or what comprises each. Also make sure that your graphic organizer contains the official language of the 10th Amendment, as well as your own summary of what it means.

Example: A governor is part of a state government.

Write an essay of one paragraph that describes how the concepts of federalism and reserved powers work together. What kinds of reserved powers do states have? What is an example of something that the federal government can do but states cannot?

In one paragraph, write an essay that explains why the Founding Fathers decided that the 10th Amendment was necessary.

Example: Before the American Revolution, each colony had its own way of doing things. When they became states, they still wanted to preserve some of their powers.

The Supremacy Clause of the United States Constitution

Preamble to the Constitution Lesson for Kids

Facts About the Middle Colonies: Lesson for Kids