Jeremy taught elementary school for 18 years in in the United States and in Switzerland. He has a Masters in Education from Rollins College in Winter Park, Florida. He's taught grades 2, 3, 4, 5 and 8. His strength is in educational content writing and technology in the classroom

Explore the 14th Amendment to the US Constitution. Discover when it was ratified by the states, how it defines US citizenship, and its effects on due process in the court system. Finally, investigate how the 14th Amendment affects Southern states. Updated: 12/27/2021
Create an account

The 14th Amendment, ratified in 1868, is the longest amendment in the U.S. Constitution. Ratified means that it was officially approved and signed into law. The most important part of the amendment is its clear definition of citizenship. Citizenship defines in what country you can legally live, work, vote, and pay taxes. The 14th Amendment gives citizenship rights to anyone who was born in the United States. It also states that once a person has been granted citizenship, it cannot be taken away unless that person lied to get it in the first place.

After the American Civil War, this definition was very important to African-American slaves that were born in the United States. It provided them with instant citizenship and allowed them to legally live and work in the country. 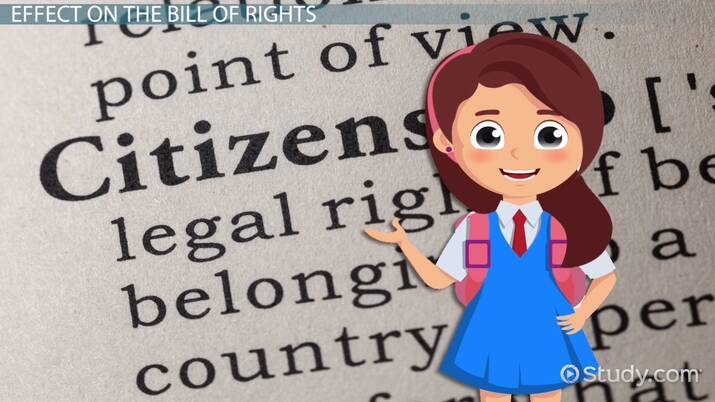 Coming up next: First Amendment: Lesson for Kids

Effect on the Bill of Rights

The 14th Amendment also gave citizens the right of due process. Due process means that citizens receive fair treatment throughout the court system and under the laws, both at the federal and state levels. The 14th Amendment also gives people equal protection under that law. This means that it doesn't matter what gender, race, or religion you are, you must be treated fairly by the courts.

Finally, the 14th Amendment defines the number of state representatives in the U.S. House of Representatives. These numbers are based on the states' populations.

Effect on the South

After the American Civil War ended in 1865, the 14th Amendment not only granted citizenship to black slaves, but also prevented former slave owners and some members of the Southern Confederacy from receiving money or participating in the government.

Let's review. The 14th Amendment of the U.S. Constitution was ratified, or approved and signed into law, in 1868 and played an important part in defining U.S. citizenship. It says that anyone born in the United States is a citizen and that all states must give citizens the same rights guaranteed by the federal government in the Bill of Rights. The 14th Amendment also says that all citizens have the right to due process and equal protection under the law in all states. It was most beneficial to former slaves after the American Civil War.

The Election-Related Amendments of the US Constitution

The 14th Amendment's Impact on Education

Filibuster in Government | What is Cloture & Filibusters in Politics?