View bio
In Aldous Huxley's 'Brave New World,' people are separated into castes. In this lesson, we'll examine the use and relationship between color and caste in the novel.
Create an account

Have you ever woken up not knowing what to wear? Chances are that you have. However, no one in the society of the novel Brave New World ever has that problem. That's because everyone's uniform is predetermined by their place in society's class structure, or their caste. Along with wearing a specific color, each person has the symbol that denotes their caste (a Greek letter). This allows people to instantly know whom they are dealing with when they meet someone on the street. In this lesson, we're going to take a look at the colors of each caste, as well as what Huxley was trying to get across to the reader by assigning colors in the first place. 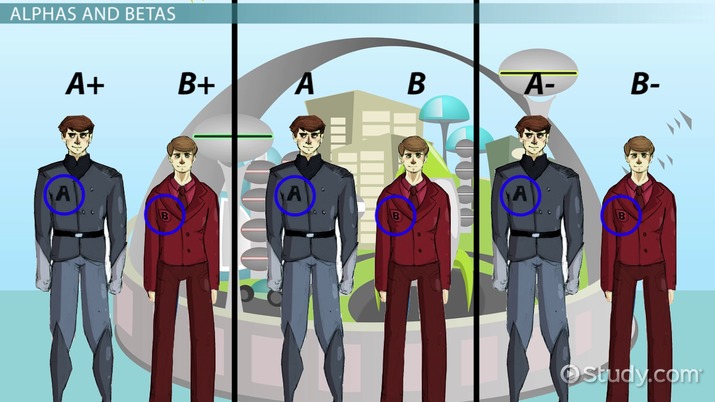 Coming up next: Purpose of the Solidarity Service in Brave New World

At the top of the caste hierarchy in Brave New World are the Alphas and the Betas. The Alphas are society's intellectuals, like college professors, scientists, and leaders, while the Betas are skilled workers who support the Alphas' efforts in roles that require intelligence but perhaps not critical thought. The Alphas wear gray, while the Betas wear mulberry, or maroon. As we mentioned, both castes also have their designations indicated on the right-hand side of the chest with an Alpha or a Beta symbol followed by a plus or minus, if applicable. Remember, every caste is also divided into subcastes.

Below the Alphas and Betas are the Gammas, Deltas, and Epsilons. Gammas are semi-skilled workers, and they wear green. Deltas are low-skill workers, such as packaging employees and machinists, and they are dressed in khaki. Epsilons are the very bottom of the hierarchy - carriers, sewage workers and so forth - and they wear black. Epsilons are generally considered morons, and they can't read or write.

At face value, it may look like there are some racial elements at play. After all, using clothing color to identify specific social groups seems like it could be a symbol for racism. And, Huxley wrote this at a time when, in other European countries (namely Nazi Germany), people of specific races were required to wear certain clothing. The most infamous example is the requirement of Jewish people wear the Star of David.

However, while Huxley does make some racial remarks in Brave New World (such as about the viability of fetuses from Mombasa), he actually tends to steer away from racism. Rather, the real criticism that Huxley is making is about class. At the time that Huxley wrote this novel, the social structure in the United Kingdom was divided more so by class than by race. In fact, in the past, there were laws in multiple European nations prohibiting the working-class from dressing like the rich - just like the conditioning in Brave New World.

In this lesson, we took a look at the castes (or places in society's class structure) and the colors of each caste in Brave New World. We learned that:

Each caste also wears their designation on their chest, followed by a plus or minus sign, except for the Epsilons who are divided into subcastes. The use of clothing to divide castes in Brave New World is a criticism of European society in Huxley's time, when lower-classes were prohibited from dressing like the upper-class.

What color do Betas wear?

2. Brave New World was first published in 1932. Since that time, Western culture has changed a great deal. Consider the portrayal of a stratified society in the novel as it relates to the cultural climate of the early twentieth century. If this novel were written today, how might the idea of the caste system be portrayed differently? For a contemporary reader of Huxley's novel, are you bothered or offended by the overall concept of genetic engineering and labeling people according to their intelligence and ability?

3. In the novel, how does the caste system interact with the plot? How about John, who grew up on a "savage reservation"? His birth father is the high-level man called The Director. Does this make John part of the Alpha class? From your perspective as a contemporary reader, do you think John would have fared better in society if his parents had been of a lower class?

Draw a picture of one of the characters in the novel. Take into consideration the caste to which that character belongs.

Regarding the significance of the colors, gray is generally seen as neutral and rather dull, while black is sometimes perceived as negative or evil. Student response should address these common assumptions, and perhaps touch on possible racial implications. The time period question is intended to direct students to learning more about the writing of the novel and Huxley's message. In our current cultural environment, the idea of intentionally creating people of lesser intelligence and ability is abhorrent to most people. Likewise, the concept of having to remain at one social and economic status for life is rather distressing. We want students to address these issues in their responses. The third question builds on the second. Though being an Alpha seems like a blessing, there are always advantages and disadvantages to any position occupied in life.