This lesson provides an overview of 'A Christmas Carol' by Charles Dickens. You'll learn about the author, his background, and how he came to write the book. You'll also examine the book's historical context and its place in the world today.
Create an account

The Author & The Origin

Charles Dickens (1812-1870) was an extremely popular British novelist who wrote during the Victorian period of literary history. In this period, advances in mass production made it possible to cheaply print books, so novels were considered a low-brow form of entertainment rather than a form of literary art.

Born into a lower middle-class family that sank into hardship, Dickens was forced to work in a boot-blacking factory at a young age, work that had a lasting impact on his worldview and influenced much of his writing. He eventually found employment as a newspaper reporter before beginning his prolific literary career. His novella A Christmas Carol, published in 1843, is one of his most well-known stories. In fact, even if you haven't read it, you've probably seen at least one movie version of it. A Christmas Carol tells the story of Ebenezer Scrooge, a cold-hearted businessman who is visited by three spirits one Christmas Eve.

Partly because of his traumatic experiences as a child laborer, Dickens was concerned about the welfare of the working class in England. During his tours in the U.S., Dickens encountered poor people, sufferers of mental illness, and prison inmates, and he became moved by their harsh living conditions. One of his own nephews was handicapped and became the inspiration for A Christmas Carol's sick boy, Tiny Tim. Although England's climate is typically temperate, memories of unusually frigid Christmases during Dickens's childhood formed the harsh backdrop for the story.

These and other factors, along with his own need for money at the time, contributed significantly to the writing of A Christmas Carol. The story contains the themes of redemption and rebirth and underscores the importance of empathy, goodwill, and generosity toward the working class and the economically disadvantaged. 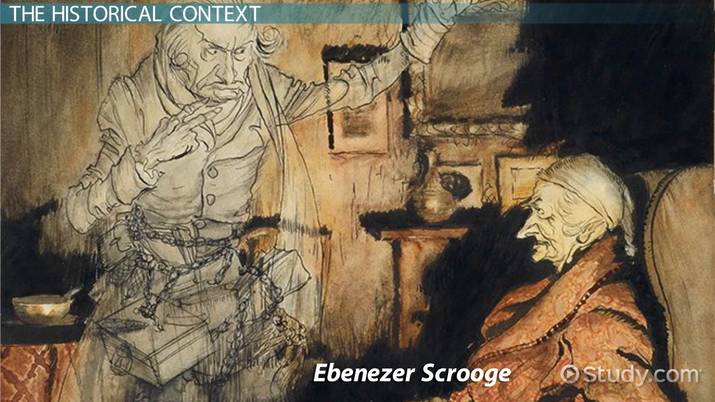 Coming up next: Class System in Victorian England

A Christmas Carol is the first of Dickens's 'Christmas books,' which were published annually in periodicals for several years. It is set in England sometime in the early 1840s. Interestingly, Christmas trees, although featured in royal and upper-class homes beginning sometime around 1840, were not yet a traditional part of the holiday for the middle and lower classes, so none are present in Dickens's novella.

A Christmas Carol is partially considered Dickens's reaction to the Hungry Forties in England. During this time, there was a shortage of jobs for factory workers, and the unemployed in the lower classes were often imprisoned like criminals. Scrooge partly represents this contempt for the poor and unemployed. Through the Christmas spirit (or, rather, through the supernatural entities that Scrooge meets on Christmas Eve), A Christmas Carol rebukes the inhumanity of this view. Dickens even arranged for the first edition of the book to be of unusually high quality and sold each copy for only five shillings so that readers of all social classes could afford to buy one.

A Christmas Carol has enjoyed widespread and enduring popularity in the English-speaking world, and has been adapted for seemingly countless stage and film productions. Movie versions appeared as early as 1910 and typically air in the U.S. throughout each Christmas season. Well-known renditions in recent history include one in 1984 starring George C. Scott, one in 1994 starring Jim Henson's Muppets, one in 1999 starring Patrick Stewart, and an animated one in 2009 starring Jim Carrey.

The continuous screen adaptations of Dickens's story demonstrate that it is still highly relevant today. Unemployment, underemployment, poverty, and aggressively profit-driven or unhealthy workplace cultures are problems that exist in many cities worldwide, regardless of time period. Among other reasons, A Christmas Carol remains popular because it reminds us to examine and enjoy our lives outside of work, spend time with our families, and to be kind to those who may be struggling, economically or otherwise, during the holiday season.

English author Charles Dickens, a popular British novelist, published his classic novella, A Christmas Carol, the story of Ebenezer Scrooge, in 1843. During this time, known as the Victorian period, books were produced cheaply and novels considered working-class entertainment. There are many connections between the story and Dickens's life. It is likely he wrote it in response to the economic strife of the Hungry Forties, a period characterized by a shortage of jobs for factory workers and when the unemployed were often treated like criminals. Since its publication, A Christmas Carol has become one of the most beloved stories in the English-speaking world, spurring many stage and film adaptations, including one as recent as 2009.

Why Did Charles Dickens Write A Christmas Carol?

Ignorance & Want in A Christmas Carol

Genre of A Christmas Carol

Symbolism in A Christmas Carol

Fezziwig in A Christmas Carol

Scrooge in A Christmas Carol

Tiny Tim in A Christmas Carol

Personification in A Christmas Carol

Figurative Language in A Christmas Carol