The intelligence of a person changes as they age and experience different circumstances and consequently deal with them. Learn more about life-span views on intelligence as well as it's definitions and aspects. Updated: 10/06/2021
Create an account

When I was younger, I wished to be the smartest person in the world. Unfortunately, it didn't happen. I guess I'll just settle on eating the brains of the smartest people and hope I absorb their intelligence. Science works like that, right?

Intelligence is loosely defined as an innate ability to learn and retain information to deal with problems or situations. Intelligence is one of those things we have defined, but because we are not looking at something solid, like height, weight or reaction speed, it leads to there being multiple ways of interpreting it. Some people look at intelligence as individual aspects, like verbal abilities, processing speed and working memory. Others argue that all of these are typically linked and that you are merely measuring different angles of a general intelligence.

What we can easily say, even in lay terms, is that inter-individual variability is high, with some people being great speakers, others understanding complex math with ease and others still looking for what they're good at. When we look at intelligence over a lifetime, we see four main aspects being emphasized: multidimensional, multidirectional, plasticity and inter-individual variability. Let's look at each of these individually. 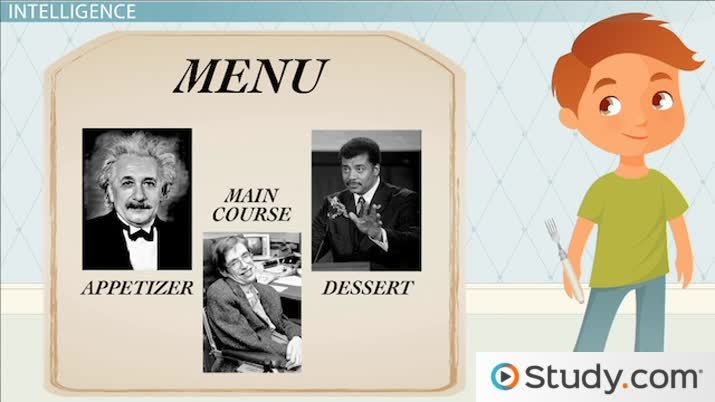 Try it now
Back
Coming up next: Research Approaches to Intelligence: Definitions & Differences

We hinted at the idea that intelligence is either made up of components, each working together, or some general intelligence matrix. 'Multidimensional' means intelligence consisting of different aspects derived from experiential, environmental and genetic influences. How this is divided up depends on the researcher.

What we can say is that the dimensions measured can vary slightly depending on those experiential, environmental and genetic factors. For example, people who have the college experience often have higher and more sophisticated vocabularies. People who grew up with lead paint chips in their environment often had developmental issues. And there are families with higher rates of brain issues, like Alzheimer's disease.

Let's link all of these things together with a simple story. Albert grew up in a good environment, receiving a decent amount of attention and without environmental toxins. He did spend a year in Europe living with some friends, and he picked up a smattering of another language. When he returned to his home, he was nearly bilingual. In addition, because of his time living abroad and using a translation guide, he learned to think and do things faster, giving him an increase in his processing speed.

Based on the idea that intelligence consists of multiple dimensions working together, the idea of multidirectional change means different cognitive dimensions will alter, over time, independently or dependently of each other. Here we have two things: first, that individual dimensions, like verbal skills, processing speed and working memory, will increase or decrease over time. Sometimes they will go up and down or down then up; there is not a single direction they will go. Secondly, sometimes two can become linked, like improving one's verbal skills by reading more leads to faster processing speeds.

Albert is getting older. His verbal skills were average because he worked as an office manager, so he needed to communicate well. As he got older, he started taking manager courses that taught him how to increase his vocabulary and about placing more emphasis on accurate information. This means if Albert had his IQ tested, his verbal dimension would increase because of the training and exposure, and his testing speed would decrease because he spends more time making sure he has the correct answer.

The brain is a highly morphic organ. Unlike, say, the liver, which does the job of purifying the blood, the brain is something that is responsible for the highly complex task of responding to the environment. To this end, a brain needs to be able to adapt or change; it needs plasticity, meaning malleable and adaptive cognitive abilities. Don't think in terms of hard plastic, but more like how plastic can change its shape and is malleable.

Plasticity is amazing. If we look at Albert, we see his verbal skills increase because of experience and then increase again due to training. On the other hand, we see his processing speed increase due to experience and use but then decrease due to focused effort. This is what plasticity is. It is about being able to change and adapt to the demands of the world you are placed in.

As we mentioned earlier, people aren't the same. Inter-individual differences are measurable differences between people. Even someone who is very similar to you in many ways can have a drastically different intelligence. Even if you have the same intelligence, as measured by an IQ test, you may possess different frames of understanding and different specialties.

Albert has been through a lot and has shown a particular knack when it comes to numbers. We could even describe him as above average. His employee, Beatrice, is not so great with numbers but is amazingly quick when it comes to processing information. Albert's other employee, Charles, is below average, with trouble managing simple tasks and instructions.

Intelligence is defined as an innate ability to learn and retain information to deal with problems or situations. Research has looked into several aspects of it, including multidimensionality, multidirectional changes, plasticity and inter-individual differences. Multidimensional is intelligence consisting of different aspects derived from experiential, environmental and genetic influences. Multidirectional change is defined as different cognitive dimensions will alter, over time, independently or dependently of each other. Plasticity is malleable and adaptive cognitive abilities, and inter-individual differences are measurable differences between people.