John Winthrop was a Puritan leader who helped found the Massachusetts Bay Colony during the 1600s. Explore a summary and analysis of Winthrop's sermon, A Modell of Christian Charity, and study his views as a religious leader in the New World. Updated: 10/11/2021
Create an account

Who Was John Winthrop?

John Winthrop (1588-1649) was one of the major leaders of the first Puritan settlement in the United States. The son of landed gentry - in other words, the landowning ruling elite of England - Winthrop became a deeply religious person as he matured into adulthood. He believed that his soul was specifically chosen by God to be saved, and this led him to become part of the Puritanical movement in England.

Unfortunately for Winthrop, the ruling king at the time, Charles I, was very much anti-Puritan. Puritans across the country were feeling the heat from the king and his anti-Puritanical laws, and Winthrop himself was removed from a court post for being a strict Puritan. Puritans were hostile to King Charles, and the king in turn wanted to be rid of Puritans. This animosity made the colonization of America by the Puritans a welcome idea for everybody involved.

Winthrop thus joined the Massachusetts Bay Colony as its leader, or governor, and agreed to settle in the Massachusetts Bay area. Eventually, twenty thousand settlers came to the colony in the 1630s, where Winthrop spent the rest of his life. During his time in Massachusetts, he was an extremely well-respected religious leader and sermon writer. 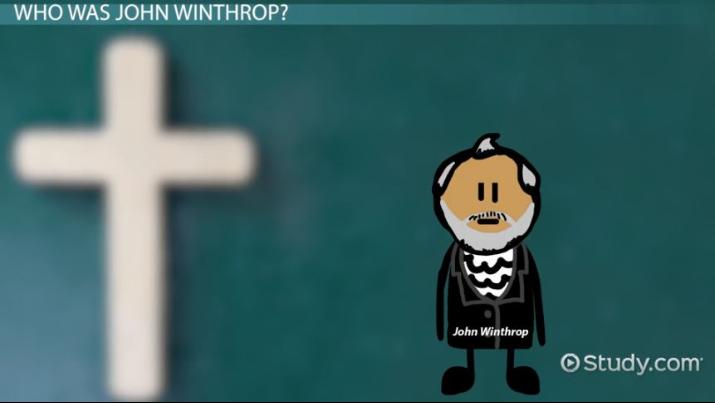 'A Modell of Christian Charity'

As Winthrop sailed across the Atlantic Ocean to Massachusetts on a ship named the Arbella in 1630, he thought about how hard it would be to survive in a rough new land. The Puritans on the boat had no idea what sort of weather or food they could expect or what dangers they might come across.

Furthermore, Winthrop and the Puritans wanted to show that their Puritanical beliefs were truly the way to serve God. They were run out of England by Charles I for their beliefs, and they wanted to validate them in this new land and create a thriving community that was successful because of their ideals.

With these two things in mind, Winthrop wrote a sermon titled 'A Modell of Christian Charity' in order to arrange his ideas about how the Puritan settlers should treat one another in order to help each other - and the colony - survive.

Winthrop's 'A Modell of Christian Charity' presents a deeply religious idea about how the Puritans should treat one another in order to ensure the survival of their colony. In this short sermon, Winthrop starts by saying that God has created men of different ranks in life - rich, poor, powerful and powerless - for three reasons:

1. Because God wants to show wisdom in creating these different types of people.

2. Because God wants to have the rich, the poor, the powerful and the powerless respect and help one another.

3. Because God wants to have these different types of people come together as one religious community that serves both God and one another through their different strengths.

Winthrop warns that as Puritans, they have entered an agreement with God to show kindness toward one another and help each other, and that if they do not do this, God will punish them by ruining their colony.

Therefore, Winthrop makes it clear that they all must do what God wants: help one another in any way possible, share with one another and function as a tight-knit community that realizes that if one Puritan has a problem, it is a problem of every Puritan in the colony.

Winthrop finishes the sermon by stating that they can be the shining 'city upon the hill'; in other words, the Puritan colony can be a great example for everyone else on how to create the perfect religious community. This idea of setting an example for the rest of the world would continue to be an American ideal used by leaders in the centuries to come.

Winthrop gave his sermon to the Puritans on the Arbella before they landed in order to stress a cooperative spirit among them and to encourage them to show Charles I back in England how a true God-fearing community should be run. He invokes the Bible in multiple places - he talks about the story of Moses from Deuteronomy and compares the Pilgrims to the Israelites, since both were entering a new land and were dependent on God and one another to survive. He also draws from Jesus's famous Sermon on the Mount in the Book of Matthew when he states that being the 'city upon the hill' will show others how to live and serve God in the best possible way.

'A Modell of Christian Charity' was a sermon that focused on how the Puritan settlers should treat one another in order to help each other - and the colony - survive. It was written by John Winthrop (1588-1649) who was one of the major leaders of the first Puritan settlement in the United States. Winthrop, due to his Puritan beliefs, was always at odds with English King Charles I and was even removed from his court position. Due to this he joined the pilgrims sailing for the New World and served as leader of the Massachusetts Bay Colony.

During his voyage across the ocean on the ship Arbella, Winthrop composed and eventually gave his now famous sermon where he laid out his plan to make the colonies in their new home serve as a 'city on the hill', thus becoming a model for those who came after them, and to show Charles I how to run things correctly. In essence, Winthrop encourages all people who are part of the community to engage in a cooperative spirit with one another and live as one strong community.

Notes on 'A Modell of Christian Charity'

Mary Rowlandson's A Narrative of the Captivity: Summary and Analysis

Sinners In The Hands Of An Angry God by Edwards: Summary, Analysis & Metaphors

The Author to Her Book: Summary & Analysis

On Being Brought from Africa to America by Phillis Wheatley: Summary & Analysis

Sociology for the South, or the Failure of Free Society: Summary & Analysis