William Faulkner's ''A Rose for Emily'' is a story about a woman who becomes a recluse after her father dies. Explore the historical context and time period of the story, including the context of Southern reconstruction and the difference between the Old South and the New South. Updated: 02/01/2022
Create an account

''A Rose for Emily:'' Historical Context

Do you ever tell stories about the place where you grew up? The short story by William Faulkner, ''A Rose for Emily,'' is set in Jefferson, the governmental center of the fictional county of Yoknapatawpha in Mississippi.

Faulkner used this setting frequently, and it's modeled on the region he grew up in: New Albany in Lafayette County, Mississippi. The story spans almost 75 years. Emily Grierson is born around the American Civil War, which lasted from 1861 to 1865, and dies in the late 1920s or early 1930s.

Because the events in ''A Rose for Emily'' occur mainly after the Civil War, they take place during what is known as Reconstruction in the South, in which Southern states had to swear loyalty to the Union (the U.S. as a single, indivisible nation), abolish slavery, and pay their war debts, but were otherwise free to rebuild and govern their own communities.

Taking advantage of this, many Southern States passed ''black codes'' legally restricting the rights of freed Blacks in order to control and use them for manual labor. This is why, in ''A Rose for Emily,'' Mayor Colonel Sartoris is able to ''[father] the edict that no Negro woman should appear on the streets without an apron.''

Freed Blacks were also often imprisoned on petty or fraudulent charges and rented out to plantations, sawmills, and mines to do forced, unpaid manual labor. 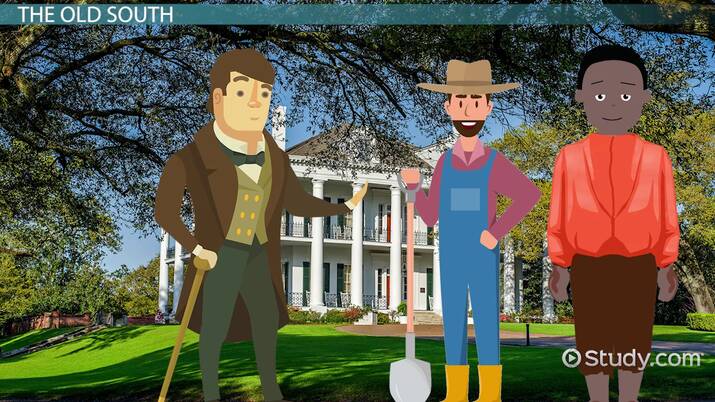 Coming up next: A Rose for Emily Writing Style

Outraged, Congress passed a civil rights bill stating that all American-born people were citizens and must be given equal legal protection. After 1870, Blacks began to be elected into government positions, and laws were passed against racial discrimination in the areas of public transport, accommodations, and economic development programs.

Blacks were still seen as servants and as the property of whites, which is why Judge Stevens in Faulkner's story talks about Emily's Black male servant with explicit racial epithets.

Racial injustice was further strengthened by the Republican party's shift to conservative rather than egalitarian values. The Reconstruction period ended in 1876, although its efforts toward racial equality later inspired the Civil Rights Movement of the 1960s.

A major theme in Faulkner's work is the decline of the Old South, which refers to the southern economic structure and cultural values before the Civil War. In the antebellum South, society was made up of landed gentry (historic upper-class families), merchants, tenant farmers (farmers who rented land rather than owning it), and slaves. During this period, aristocrats lived by a southern code of chivalry. Men were protectors and providers, and women were the keepers of morality.

In ''A Rose for Emily,'' the Griersons are clearly aristocrats (landed gentry), and they have the arrogance and superiority complex that goes with this. Emily's father clearly exhibits this attitude by thinking no local young man is good enough to marry his daughter, and Emily shuns society even after his death for the same reason.

Sartoris, attempting to be a good southern gentleman, concocts the white lie that the city of Jefferson owes the Griersons money. He wants to help Emily's finances by ending her city tax obligations, but doesn't want to hurt her aristocratic pride.

After Sartoris dies, the new generation of city officials wants Emily to pay her city taxes like everyone else. This is partly because profits from modern industrialization (including the railroad, motorized vehicles, and large-scale crop production) increased the power of the merchant or business class, thereby decreasing the influence and social values of the landed gentry.

This is a sign of the emerging New South, which was the southern economic structure and cultural values after the Civil War. Industrialization also allowed the New South to increase its production and consumption of cotton as its biggest crop, which is why Emily's house is surrounded by ''cotton wagons and gasoline pumps.''

Faulkner gives us a striking visual image of the decline of the Old South and the rise of the New South as they are personified by Emily's house and her neighborhood in Jefferson: ''garages and cotton gins had encroached and obliterated even the august names of that neighborhood; only Miss Emily's house was left, lifting its stubborn and coquettish decay above the cotton wagons and gasoline pumps - an eyesore among eyesores.''

Here, it's implied that Emily's heavily decorative house, a symbol of the Old South, resents this ''encroachment and obliteration,'' but refuses to succumb to a world where the aristocratic Grierson family and those like them are no longer in power.

William Faulkner's short story ''A Rose for Emily'' is set in Jefferson, the fictional governmental center of the fictional county of Yoknapatawpha in Mississippi. It spans 75 years. Emily Grierson is born close to the American Civil War and dies in the late 1920s or early 1930s.

This is the period in which Reconstruction took place in the South, in which Southern states had to swear loyalty to the Union (the U.S. as a single, indivisible nation), abolish slavery, and pay their war debts but were otherwise free to rebuild and govern their own communities. Although slavery was abolished, many states passed ''black codes,'', which were essentially rules that limited the rights of freed slaves. Blacks were used as a cheap or free labor force.

Congress passed a bill to give Blacks legal protection equal to that of whites, but Southern whites empowered the white supremacist organizations the Ku Klux Klan, as well as others, to retaliate, targeting Black and white Republican leaders.

Southern Tradition in A Rose for Emily

A Rose for Emily by William Faulkner | Setting, Quotes & Analysis

A Rose for Emily: Characters & Symbolism

Moral of A Rose for Emily

Conflict in A Rose for Emily

The Father in A Rose for Emily: Quotes & Relationship

A Rose for Emily by William Faulkner | Figurative Language & Metaphors

A Rose for Emily by William Faulkner | Title Analysis & Symbols

A Rose for Emily: Timeline of Events

A Rose for Emily by William Faulkner | Ending, Analysis & Explanation

A Rose for Emily by William Faulkner | Narrator & Point of View

A Rose for Emily: Irony

A Rose for Emily Foreshadowing Quotes

Metaphors & Similes in A Rose for Emily