Holly has master's degrees in history and writing, as well as an extensive background in art history.

Abstract expressionism was the name given to works of art produced in the 1940s and 1950s by American artists such as Jackson Pollock and William de Kooning. Explore the definition, history, and characteristics of abstract expressionism, learn about the major artists who created this movement, and understand the art's purpose as a way to seek meaning in a stressful time. Updated: 10/14/2021
Create an account

You've probably heard someone say that a lot of modern art looks like something a kindergartener could do. The kind of art the speaker had in mind is most likely Abstract Expressionism, the style of painting that dominated the art world from World War II until the 1960s.

The Abstract Expressionists had no interest in creating recognizable images of the world we see around us. They wanted their canvases to reflect their own struggle to find meaning in the act of painting, in a world where any camera could show what things looked like.

Abstract Expressionism is also called the 'New York School,' and it marked an important historical shift. After World War II, Paris was no longer the center of the art world. Abstract Expressionism was the first internationally celebrated art style to emerge from the American art scene, and while some people hated it, others championed it as an expression of American individualism. 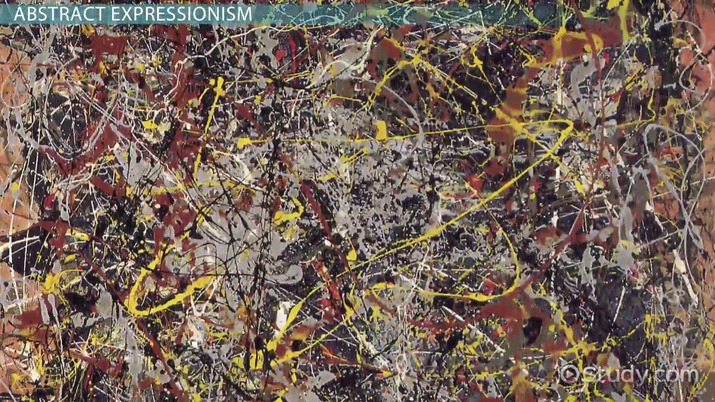 The term 'Abstract Expressionism' really does explain what this style is all about. First of all, it's abstract art - the artist is not trying to recreate the look of things out here in the 'real world'. The canvas is not a 'window into space'; in fact, as painters and critics of the time would point out, it's not a 'space' at all - it's a two-dimensional surface the artist makes marks on. Sure, those marks can create the illusion of space, but that's all it is, an illusion. Shouldn't an artist strive to be something more than an illusionist?

In the years around World War II, the answer to that last question was almost always 'yes'. That's where the term expressionism comes in. It was the artist's job to express the truth of the human condition, even if that truth was not very pretty. Where should the artist look for truth? For many, the answer was: inside the artist's own psyche, in the subconscious, where the primal fears and desires that shape our behavior can be found.

By the early 1900s, painters who used bold lines and colors to express feeling in their work were already being called Expressionists. (Think of 'The Scream', by Norwegian painter Edvard Munch. That's Expressionism.)

When painters began to combine abstraction and expressionism, it made sense to call their work Abstract Expressionism.

Abstract Expressionism brought together a number of long-term artistic trends. The invention of photography in the nineteenth century had called the value of painting into question. Why should the artist put so much effort into recreating the look of things, when a machine could do a better job at the click of a button? More and more, painters sought ways to show what the camera couldn't, to depict not just what we experience, but the way we experience it.

It took a few decades for these ideas to catch on in the United States. Some American painters were receptive to European influence, but others thought they should focus on depicting American life in an easily recognizable style. Especially during the Depression, some felt it was the artist's job to illustrate social and economic conditions, not emotional states.

Everything changed after World War II. In an era haunted by images of genocide, totalitarianism, and nuclear war, paintings of farmers in Iowa no longer seemed that relevant. People living through this period sometimes called it an 'Age of Anxiety'; some of them were ready to appreciate art that expressed conflicts and uncertainties like their own.

This was also the age of the Cold War. New York took the place of Paris as the center of the art world just as the United States was asserting itself as the center of the free (or non-Communist) world. The Abstract Expressionists' image as non-conformists caught the imagination of tastemakers. Controversy over whether splashed and dribbled canvases should even be considered art demonstrated the diversity of opinions in a free society. So, while never that popular with the public at large, Abstract Expressionism was nevertheless promoted as an expression of Americanism. In 1949, Life magazine did a photo spread on painter Jackson Pollock, which suggested he might be 'the greatest living painter in the United States.'

The Abstract Expressionists didn't just reject representation; they wanted their paintings to reflect the process of creation. Paint might be splashed or dashed onto the canvas. Big, bold brushstrokes showed the artist's individual touch; the lines and shapes on the canvas might appear (or even be) random or accidental (often called action painting). Or there might be vast areas of color (color field painting). The canvases themselves were big, sometimes too big to be displayed anywhere but in a museum or other public space.

Jackson Pollock (1912-1956) was the best-known Abstract Expressionist. His 'drip paintings', created by pouring paint (often ordinary house paint) directly onto the canvas, came to symbolize Abstract Expressionism in the popular imagination. In the art world, Willem de Kooning (1904-1997), known for his highly abstracted images of women, was equally celebrated. The luminous color field paintings by Mark Rothko (1903-1970) may be the most beloved works of Abstract Expressionism. Other significant figures include Lee Krasner, Robert Motherwell, Clyfford Still, Arshile Gorky and Barnett Newman.

While Abstract Expressionism had its roots in pre-war Europe, it emerged in New York as an important style after World War II, just when New York was replacing Paris as the center of the art world. Instead of representing outward appearances, painters in this school created abstract images that reflected the process of creation, and the search for meaning in an age of doubt and tension. Abstract Expressionism often utilized action painting and color field painting, and major names in this field include Jackson Pollock and Willem de Kooning.

The Role of Chance in Dadaism

Relationship Between Politics & Art in the Early 20th-Century

Themes of the Romantic Art Period

Postmodern Art | When Did Postmodernism Begin?