Acceleration is the measure of how fast an object's velocity changes. Learn about the definition and examples of acceleration, understand its equation, and practice solving problems involving acceleration. Updated: 09/30/2021
Create an account

I'm sorry if you've heard this one before, but the cheetah is the king of fast. At its best, a cheetah can run over 100 km/hr. By itself, this is an incredible feat. But what I find even more incredible is that the cheetah is able to be standing still one second and three seconds later it's running 100 km/hr! Most of your high-end cars require between four and six seconds to do what that cheetah does in three seconds. And with this quick analogy, we can get to the meat of this lesson: acceleration. 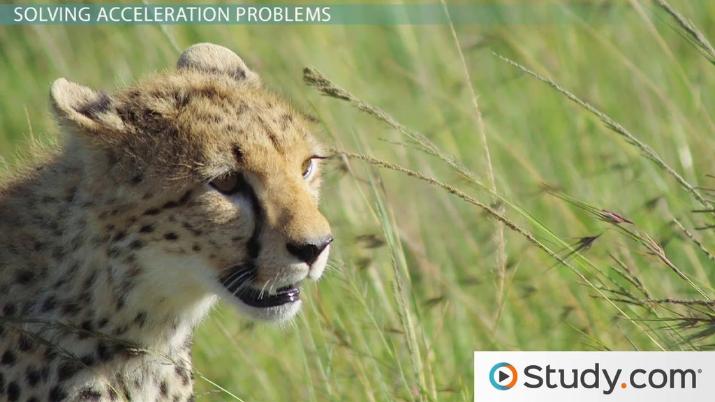 Try it now
Back
Coming up next: Significant Figures and Scientific Notation

The units for acceleration are m/s^2, but something else is required. Acceleration, like velocity, is a vector quantity. This means that you need to specify the direction of motion as well. This could be a compass point, like north and east, or a simple description like right or left or up or down, depending on the question. In addition, acceleration can be positive or negative. If a car, for example, is traveling in a straight line and its speed increases, the acceleration is positive. If that car slows down, its acceleration is negative.

I want to pause for a minute here to clarify a couple of points. First, in everyday usage, acceleration has come to mean speeding up. If you press on the accelerator in your car, the car's speed increases. Acceleration has a slightly different meaning in physics, though. The definition specifically mentions a change in velocity, not speed.

Remember, velocity has a direction attached, so if the direction of travel changes, the velocity changes, even if the speed remains constant. Picture setting the cruise control on the car at 40 km/hr and driving in a circle. Speed is a constant 40 km/hr, but velocity changes every time you change direction. Since velocity is changing, you can calculate acceleration even though the speed is constant. Acceleration is not dependent on a change in speed.

Remember the cheetah from the introduction? Let's use what we just learned about acceleration to calculate the acceleration of the cheetah. We know that the cheetah has an initial velocity of 0 km/hr because he's standing still, stalking his prey. When he's ready to attack, he can reach a speed of 100 km/hr in 3 seconds. First, we need to convert kilometers per hour to meters per second.

The cheetah starts with a velocity of 0 m/s because he is not moving. He begins running west, after a gazelle, and reaches a maximum velocity of 27.8 m/s west in 3 sec.

This means that for every second the cheetah is running, his velocity increases by 9.3 m/s. Since he is increasing his speed in a constant direction (west), this is positive acceleration. The directional term west is required because acceleration is a vector.

Let's look at another example. A driver traveling north at 90 km/hr in a zone with a speed limit of 40 km/hr sees a police officer. The drivers slows to 35 km/hr to avoid getting a speeding ticket. It takes 8 seconds to slow the car down to 35 km/hr. What is the acceleration?

In this case, the car is slowing down so the acceleration is negative.

Through this video lesson, you can prepare to:

Scalar Quantity Definition & Examples | What is a Scalar in Physics?

Force in Physics Characteristics & Examples | What is Force?

Motion Laws & Significance | What is Motion?