View bio
Accepted value refers to the value of a truth in science and mathematics. Explore the definition and formula for accepted value and discover examples of accepted value, how it differs from experimental value, and the percentage error formula. Updated: 10/15/2021
Create an account

What Is Accepted Value?

The term accepted refers to something that is agreed to be correct by most people. For example, it is an accepted idea that if someone eats nutritiously and exercises regularly, they will maintain a good weight. It is also an accepted idea that getting about 8 hours of sleep each night will leave you adequately rested and alert for the rest of the day. In terms of science, it is accepted that the earth is round and that gravity is what keeps us grounded to our planet.

Similarly, accepted value is a term often used in science or mathematics to mean the value of something that is regarded as true among all scientists or mathematicians. This is different from experimental value, which is the value that results from an individual's laboratory experiment or an individual's calculation. Accepted value is often referred to as theoretical value. 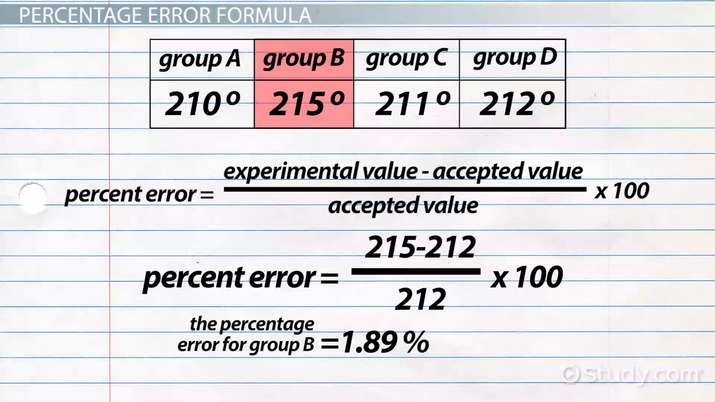 Let's look at a few examples.

The accepted value of the temperature at which water boils is 212 degrees F. It is accepted because in experiment after experiment, scientists have all come to the conclusion that this is the exact temperature that water needs to heat up to in order to start boiling.

To understand the difference between accepted value and experimental value, let's look again at our example about the boiling point of water. Mrs. Jones' middle school chemistry class is expected to form lab groups A, B, C and D to find the temperature at which water boils in today's experiment. Mrs. Jones knows that the accepted value of boiling water is 212 degrees F, but she wants to wait to tell the class until they complete their experiment to prevent experimenter bias. Here are the results from the experiment:

As you can see, Group D came up with exactly the right temperature of 212 degrees F when they conducted their experiment. Groups A, B and C experienced error in their findings, although they're only off by a few degrees. The temperatures that groups A, B, C and D found in their experiments are called the experimental values because they're the results from individual experiments. The accepted value, as we know, is 212 degrees F. How many errors did groups A, B and C commit? Let's find out!

In order to find the percentage error in an experiment, you must use both the accepted and experimental values.

Let's return to the boiling water experiment above and find the percentage error of Group B. To do so, we just need to plug their values into the equation.

So, the percentage error for group B is about 1.89 percent.

Accepted value is usually a number (or value) that is regarded as true by the general public, scientists, mathematicians, etc. It is often a term that is used in science, especially chemistry. It's different from experimental value, which is the value yielded by a researcher or experimenter. The experimental value can be off, thus creating percentage error.

Cara's "true height" is just 4 feet and 11 inches. To boost her self-confidence, she started taking some height enhancement vitamins. Three days had passed and she decided to have her height measured by her sister. When measured using a flexible tape several times, her sister observed that her height always resulted in values equal to five feet. Cara was wearing one-inch heeled shoes as her height was measured.

Measurement is very important to physicists that they have given it so much thought and analysis. They regard any measurement as not exact, but simply an approximation. In reality, measuring a certain physical quantity two times or several times using a single measuring device does not yield the same result. This leads to differences in the experimental value to the accepted. Such uncertainty in the measurement is known as an error.

Chemistry Lab Equipment Overview & Glassware Types | What is a Beaker Used for in a Lab?

Selecting a Problem to Research