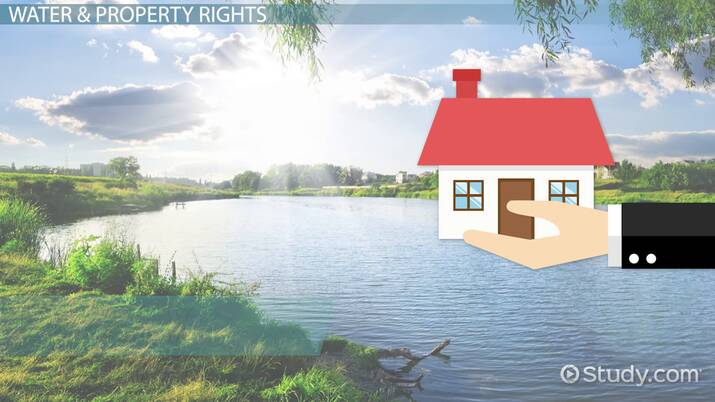 In some respects, water is like a living organism because it moves and affects the environment around it. If you were to closely monitor the bank of a river or the shoreline of a lake or ocean over a long period of time, you would eventually realize that the water was depositing soil on the shoreline or bank. This natural, slow, and almost imperceptible deposit of soil by the water is known as accretion. Land formed by accretion is generally recognized to be owned by the owner of the bank or shoreline upon which the accretion occurs. Keep in mind, however, that accretion does not destroy an existing right of way, which is the legal right to travel along property owned by another person.

If you've ever watched a river during a major storm or flood, you probably have seen a bit of avulsion. Avulsion is a sudden and perceptible change in the land brought about by water. Avulsion may result in the addition or removal of land from a bank or shoreline. Let's look at an example.

Anne owns a parcel of land along a bank of a river, and a violent storm washes away Anne's bank and deposits much of the soil a mile downstream onto Tim's riverbank. The sudden and perceptible removal of Anne's soil onto Tim's riverbank is an incidence of avulsion. The law generally provides that soil removed by avulsion remains the property of the original owner. Of course, Anne would have to go through the time and expense of reclaiming the soil.

Sometimes avulsion results in a relatively permanent change in the course of a river or stream. This may become important if the river or stream demarcates the boundary between two property owners. Let's look at another example.

Let's summarize the differences between accretion and avulsion. Accretion occurs slowly and is imperceptible, while avulsion happens rapidly and perceptibly. The property owner gains ownership of land added to his shore or bank through accretion. However, an owner that loses land to avulsion generally has a right to reclaim it. A shift in a watercourse that serves as a boundary between two parcels of land does not generally change the legal boundary of the parcels if the shift is a result of avulsion. However, it's always important to check your specific state law regarding all of these issues.

As any geologist will tell you, there are large areas of land across the planet that used to be covered with water. In fact, a large chunk of the United States was under water when dinosaurs roamed the Earth. But as we all know, this water dried up, leaving land. Reliction is the term we use to describe the gradual and permanent recession of water that results in dry land. A temporary recession of water, such as during drought years, is not considered reliction. Generally speaking, land uncovered by reliction is owned by the property owners whose lands abut it.

All right, let's now take a moment to review what we've learned. Water can change the landscape of a parcel of property and thereby affect the legal rights of property owners. We first learned that accretion is the slow, imperceptible deposit of soil onto a bank or shoreline by water. Land that is added by accretion is generally recognized to be owned by the person that owns the original bank or shore.

Finally, we learned that reliction is the creation of land by the gradual and permanent recession of water. The law generally recognizes that land created by reliction is owned by the property owners whose land abuts the new land.

Legal Disclaimer: The information on this site is for educational purposes only and is not a substitute for professional legal advice.

What is a Deed of Trust? - Definition & Overview

Estate for Years vs. Periodic Tenancy

What is a Net Listing in Real Estate?