Assimilation and acculturation begin when two cultures collide. Explore the differences between these closely related terms and analyze a few examples. Updated: 12/06/2021
Create an account

Whenever two cultures come into more than casual contact, it is inevitable that they will both be changed. There are, of course, variables to this. Which culture is going to change more? How long will it take? Which of the cultural markers will change and how? Let's take a closer look at how these things work.

However, this scenario leaves out the fact assimilation is usually a two-way process. Yes, the minority culture does change dramatically and loses cultural separateness, but the majority culture also changes during this process. It's a lot like cooking: when you add salt it quickly becomes invisible, but the final meal is changed as well. While the looks of the meal may not appear greatly changed by the addition, it is different after the assimilation in recognizable and important ways. 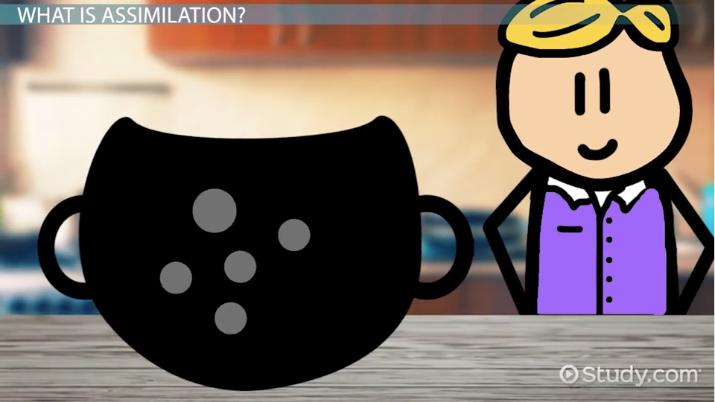 Coming up next: How to Read Body Language

If enough of the cultural markers of language, tradition, and food from the minority culture are maintained for the members to be able to recognize themselves as a distinct culture, then it is said to have undergone acculturation instead of assimilation. This type of change is much more likely to happen during voluntary migrations or peaceful coexistence, rather than as a result of the conquests or forced coexistence that typically characterize assimilation.

Of course, acculturation is also a two-way process because both cultures will still change and be affected by each other. To return to the cooking analogy, acculturation would be akin to adding an ingredient that is still recognizable in the final meal: basil leaves into an omelet, for example. This ingredient can still be distinctly recognized in the final dish, but both the ingredient and the product are different than before the acculturation.

Examples of Acculturation and Assimilation

Any time two cultures come into prolonged contact, assimilation or acculturation will start to happen. Let's look at a few examples to give you a better idea of these processes.

In the ancient world, Greece was a superpower. The Roman Empire was an upstart that eventually conquered Greece as well as much of modern day Europe and most of the lands surrounding the Mediterranean Sea. Our current calendar system traces its roots to these two cultures meeting. The Greeks had many different calendars that the Romans adopted and changed. Early Roman calendars included 10 months, but later added the months of July and August in honor of Julius Caesar and Augustus Caesar, giving us our current 12-month calendar system.

Inuit and US, Canada, Norway

Some researchers estimate that the Inuit culture in the far north remained largely unchanged for up to 5000 years before contact with the modern western world several hundred years ago. Although this minority culture still retains many of its original customs, language, and food, it has adopted some modern practices including housing, guns, and snowmobiles, for example. The western world has also learned some of the Inuit words and concepts and used them in a modern way. Modern whaling harpoons are steel copies of Inuit bone designs. Kayaks made out of fiberglass and plastic are widely available today, but the original design came from what the Inuit used to hunt seals.

Many Cultures in the US

There are a number of cities in the US, especially on the west coast, where it is possible to accomplish most everyday tasks in a foreign language. In these separate small communities, it is possible to read newspapers, shop, bank, and go to social clubs in a variety of languages. Spanish is the most obvious, but there is no individual Spanish culture, since in this country it is made up of cultures from a variety of Central American, South American, and Caribbean countries. Other examples of acculturation are cultures from Korea, the Philippines, and Laos, to name a few.

The Politics of Balkanization

What is Cultural Amalgamation?

An Ounce of Cure by Alice Munro: Themes & Literary Devices

History of ESL Education in the U.S.