Catherine has taught high school science and has a master's degree in biology.

Actinobacteria are gram-positive with a high G and C DNA base ratio and are often found in water and soil. Explore the definition and characteristics of actinobacteria and learn about mycobacteria, streptomyces, and additional types of actinobacteria. Updated: 11/19/2021
Create an account

There is a huge diversity of bacterial species. In order to help categorize bacteria, they can be separated into groups, such as gram-negative and gram-positive bacteria. Gram-negative bacteria have an outer membrane that encases their peptidoglycan layer in their cell wall, whereas gram-positive bacteria only have a thick peptidoglycan layer surrounding the cell. Another way that bacteria are grouped is by the ratio of guanine (G) and cytosine (C) DNA bases in their genome. Actinobacteria are typically gram-positive and are considered to have a high G and C DNA base ratio.

Actinobacteria are often found in soil and water. They are able to change their shape to adapt to their environment by extending out branches, or filaments. In fact, this group of bacteria got its name because of how their branches extend outward: Actino means radiate.' When trees grow roots, they are reaching out to find nutrients and water. These filaments serve the same purpose, allowing Actinobacteria to reach across dry gaps in the soil to access nutrients and water. And as a bonus, these branches increase the bacteria's surface area, allowing more nutrients to be absorbed. 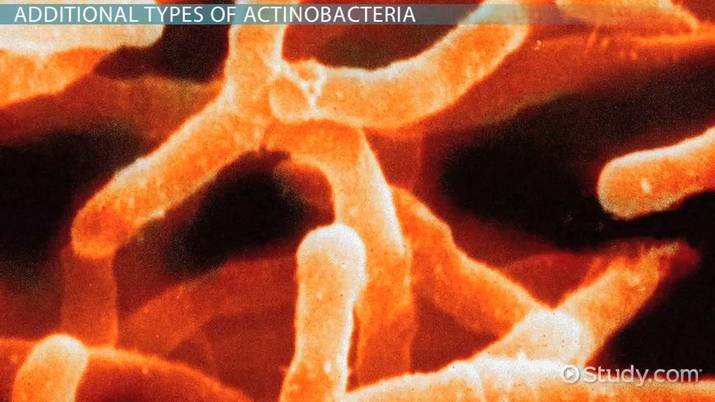 Coming up next: Agglutination in Hematology: Definition & Examples

Mycobacteria are an aerobic (requires oxygen to live) form of Actinobacteria which colonize soil and water. They are unique in that they have an outer membrane made of mycolic acids in addition to the typical peptidoglycan layer in their cell wall. Mycolic acids are distinctive to Mycobacterium and provide a waxy surface that acts as a sort of survival suit. This enables the bacteria to endure dry environments and repel antimicrobial chemicals.

Mycobacteria are a gram-positive bacteria, but because of their waxy surface, they resist staining, similar to that of gram-negative bacteria. These bacteria grow very slowly in culture due to nutrients passing slowly through the mycolic acid outer layer, yet can still be very pathogenic. Mycobacteria tuberculosis are responsible for tuberculosis, while Mycobacteria leprae cause leprosy.

Another form of Actinobacteria found in the soil is Streptomyces. These bacteria have special structures called conidiospores, which are asexual spores found at the ends of filaments. Like tree roots, Streptomyces can branch out in search of new nutrients in the soil. If they find a suitable environment, the conidiospores can begin a new colony of Streptomyces.

Streptomyces are aerobic bacteria that are able to digest nutrients from the soil, such as starch and cellulose. In fact, the traditional musty smell in soil is a result of gas produced by Streptomyces. These bacteria are valuable to modern medicine because they produce many antibiotics.

There are a few other interesting bacteria in the Actinobacteria group. One such bacteria, called Corynebacterium diphtheria, is responsible for diphtheria. Propionibacterium is used to ferment Swiss cheese, and the species Propionibacterium acne is the causative agent in some acne. The anaerobic (does not require oxygen to live) bacteria Actinomyces israelii can infect the head, neck, or lungs in patients.

Actinobacteria are a category of bacteria that are typically gram-positive and have a high G and C DNA base ratio. They have the ability to form branches called filaments in order to search for nutrients. Mycobacteria, an aerobic (requires oxygen to live) form of Actinobacteria which colonize soil and water, have a unique outer membrane made of mycolic acids, which helps them adapt to dry or harsh environments. Streptomyces, another form of actinobacteria found in the soil, carry conidiospores, which are asexual spores found on the ends of filaments that are capable of starting a new colony. Actinobacteria can be pathogenic, yet can also produce valuable life-saving antibiotics.

Bacteria Overview & Characteristics | What is Bacteria?