What are dreams? Where do they come from? These are questions that have been asked for years. Even though multiple theories exist which seem to provide reasonable explanations, a consensus on how dreams develop and why we have them has yet to be reached.

As with many phenomena in the world of psychology, the explanation of dream activity will vary depending on the approach. Approaches to understanding psychology, such as cognitive, psychodynamic, neurobiological, and evolutionary, to name a few, each view dreams as serving different purposes and stemming from different psychological processes.

For instance, a dream in which you are walking through a desert on a hot, sunny day might have a variety of explanations depending on the approach that you subscribe to. Does the desert represent some repressed emotion? Maybe you just finished watching a documentary on deserts before going to bed? Maybe you are just thirsty?

The focus of this lesson, activation-synthesis theory, originated from a neurobiological approach to understanding psychology. 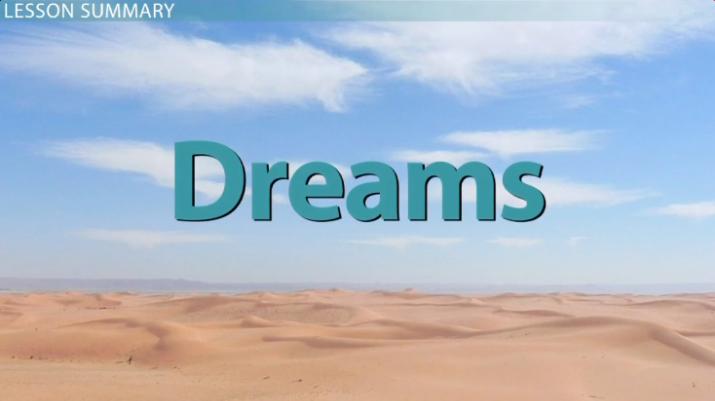 Coming up next: False Consciousness in Sociology: Definition & Examples

What Is the Activation-Synthesis Theory of Dreams?

Activation-synthesis theory is a neurobiological explanation for the genesis of dreams first proposed in the late 1970s by J. Allan Hobson and Robert McCarley. According to their theory, dreams are what result when the cerebral cortex attempts to make sense of (or synthesize) the neural activity that is taking place in lower, less-advanced portions of the brain, like the brain stem.

The lower-lying structures of the brain are primarily involved in biological functioning necessary for survival and reproduction, while the cerebral cortex is responsible for more advanced activity, such as thought development and processing.

The brain is quite active while we sleep. All kinds of neural activity is taking place. Neurotransmitters are being released and electrochemical transmission is occurring constantly. The neural activity required to keep the brain functioning is not isolated to only a few areas of the brain.

The brain is a highly integrated structure, which means that when something is happening in one area, many areas are impacted. So, when neural activity fluctuates in the lower parts of the brain, such as the brain stem, the cerebral cortex picks up on this and attempts to synthesize and make sense of all that activity.

For example, according to the activation-synthesis theory, the dream about being lost in the desert may simply be the result of neural activity in lower-level structures of the brain associated with regulating thirst. The cerebral cortex is able to associate the location of the neural activity with the part of the brain associated with thirst regulation. Since the cortex is likely to associate mental concepts like a hot, dry desert with thirst, the resulting dream involves thoughts that may include walking in a hot dry desert.

This is just one example. The resulting dream is heavily influenced by mental concepts that exist in the real world and are associated with different lower-level brain activity. So, the thirst example could just as easily result in a dream about running on a treadmill or even eating spicy foods.

While the activation-synthesis theory of dreams can account for many aspects of dream development, it certainly cannot explain all dreams. It has provided great insight into the biological aspects of dreams, resulting in a better understanding of how dreams develop.

Complete this lesson and you'll be able to:

How Algorithms are Used in Psychology

How to Write in Response to Other Art Forms