Adapting in the business world is about how an individual (or business) embraces change and grows. In this lesson, you'll learn more about the adaptable mindset, its importance, and see a few examples.
Create an account

There's a fable from childhood called ''The Oak and the Willow'' that tells the story of two trees as the weather is changing. As the tale goes, a tan oak tree and a willow tree stood in the same field. When the wind blew, the willow would blow every which way while the oak tree stood tall. This caused great distress to the willow, who lamented his inability to stay as strong as the oak. One day, a windstorm came, breaking the oak tree while the willow stood firm. It was the willow tree's adaptive nature that allowed it to bend with the winds of change, while the rigid oak suffered a cruel fate.

Though just a story, this fable illustrates a principle that's also important in business: the ability to be adaptive. 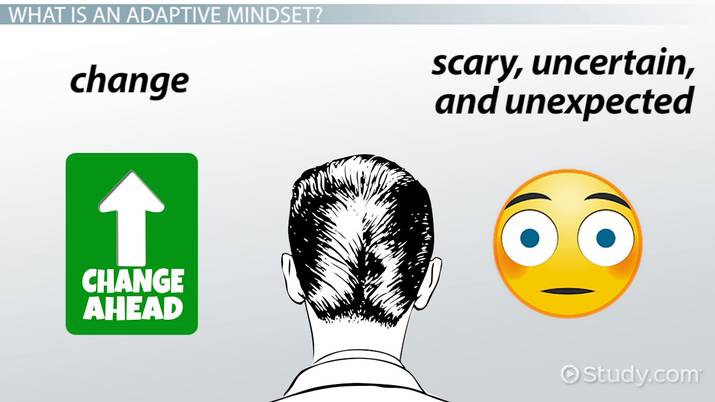 Coming up next: Fixed vs. Growth Mindset

What Is an Adaptive Mindset?

An adaptive mindset, much like the willow that weathered the changing conditions, is all about agility. It is the ability to look at your current situation, embrace flexibility to handle change, and make the best of a situation to achieve success.

At its heart, having an adaptive mindset is about how an individual copes with change. And, let's be honest: No one really like change, right? Change is scary, uncertain, and unexpected. But a person with an adaptive mindset handles change by being receptive to other possibilities and ideas and being willing to step out and make mistakes, all with the express purpose of growing and progressing.

Someone once said, ''Change is inevitable.'' And that couldn't be more true. The ability to adapt when change inevitably comes along is a critical skill in the workplace. Having an adaptive mindset allows you to look clearly at a scenario and make the necessary adjustments to continue moving forward.

The importance of adaptive reasoning, which is being able to approach a situation with a mindset that is open to changing and adapting as the situation changes and adapts, cannot be stressed enough. Businesses that are managed by individuals with adaptive thinking and reasoning succeed, while less adaptive businesses fail.

Netflix is a prime example of a business that adapted to change in its industry. As retail video rental stores began to vanish, Netflix offered home delivery of DVDs. Later, it changed things up again, offering primarily internet-based video streaming to the latest and greatest movies and TV shows.

Netflix succeeded where brands like MySpace failed. MySpace, the forerunner to Facebook, failed to adapt its look, model, and features at a time when the social media landscape was rapidly evolving. Today, MySpace is an afterthought in social networking circles.

Importance of an Adaptive Mindset

1. It Makes You More Valuable

Because things change so quickly—at work and all around us—being receptive and willing to change is an important characteristic in a valued workforce. What that means is, if your boss approaches you with a new idea, you grab onto it and give it your all rather than thinking of all the reasons you can't—or don't want to—participate.

2. It Strengthens Your Leadership Abilities

Business leadership and management require adaptability. Just look at our previous example of MySpace. The company's management, fraught with an inability (or unwillingness) to change, relegated the once-popular social media network to the background. Strong leaders anticipate change, lead it, and get buy-in from those around them to help make it successful.

3. It Makes You More Well-Rounded

Being stuck in your ways, both personally and professionally, can lead to a host of unpleasant feelings when change comes along: anger, frustration, hopelessness. Some psychologists believe that adopting an adaptive mindset opens you up to greater happiness because you feel more equipped to handle changes that come your way.

4. It Prepares You for Career Changes

Jobs change, responsibilities change, businesses change. Notice a common thread? (It's change.) Possessing an adaptive mindset better prepares you for changes in your professional life, whether a business you're working at closes, you're demoted, or you opt to pursue a different career path altogether.

5. It's the Antidote to Adversity

Have you ever met someone who never seems to get rattled or frustrated by changes going on around him? Chances are, he's developed an adaptive mindset, an understanding of how to embrace change and roll with the punches. Adaptability allows you to be more resilient in the face of change.

In addition to Netflix's successes and MySpace's cautionary tale about maintaining an adaptive mindset, the company you may recognize for its computers and printers— Hewlett-Packard —actually did not begin that way at all.

HP started as an engineering firm in the late 1940s, making audio and signal generators. Recognizing a shift in the personal computing industry, HP's leadership adapted to become a giant in that space. Today, it's one of the most recognizable manufacturers of computers and computer equipment, a credit to the adaptive mindset of the company's leadership. Without it, HP as we know it might never have existed.

The critical characteristic of being adaptive in the face of change is about being able to remain flexible in the face of adversity and embrace agility to achieve success in a given situation, which is why it is called the adaptive mindset. Adaptability in business is an employee's ability to look at a current scenario, envision and accept new ideas or thoughts, and accept changes to continue growing.

Adaptive reasoning, which is the act of being able to change as a situation changes, is important in business because it makes you a more valuable employee. It strengthens your leadership skills and makes you a more well-rounded individual, personally and professionally. It sets you up for plowing through adversity and prepares you for life's changes, whether that's handling a change in career well or lessening your feelings of frustration and anger when necessary.

Adaptability in the Workplace: Strategies & Importance