Mia has taught math and science and has a Master's Degree in Secondary Teaching.

Negative fractions are representing partial numbers that are less than zero, and may be easier to work with in the context of time and money. See how to add and subtract negative fractions through examples of time changes and money debt. Updated: 11/20/2021
Create an account

So, you know how to add, you know how to subtract, you know what fractions are and how to add them. So, what's the next step? Well you may remember that not all numbers are positive numbers. If you think of a number line, the line of numbers goes out from zero in both directions. To the right, we have all the positive numbers, and to the left of zero, are all of our negative numbers. In between the whole numbers, there are even negative parts of numbers, which may be written as fractions.

In this lesson, we'll look at how to add and how to subtract negative fractions. When working with negative numbers, or numbers that are less than zero, it's often helpful to think of them in terms of money or time. Having negative values for money or time means that we owe that amount.

First let's look at an example that will show you how to subtract fractions as they apply to time. 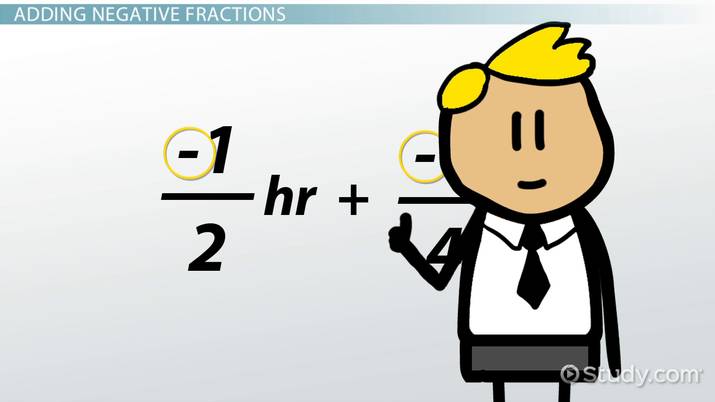 Try it now
Back
Coming up next: Common Denominator: Finding & Fractions

My son gets a behavior report every day from school. Based on how well he did in school, he gets rewarded with free time to play with his friends or to watch TV. If his report is poor, he owes me time by doing extra chores around the house.

Last week was an especially challenging week for him. On Monday, he had 3 negative comments from his teacher, so he owed me 30 minutes of chores. Tuesday was a little better, but he still owed 15 more minutes of chores. Mathematically, we would represent his total time owed as:

We would add the total minutes and the result would be -45 minutes, meaning that he owes me a total of 45 minutes of chores. But this lesson is about fractions, so let's re-write our equation using hours as our units. Our equation now becomes:

Let's continue with our calculation. It is important to remember that when adding or subtracting fractions, they must have a common denominator, which means that the number on the bottom of both of the fractions have to be the same. We can change the first fraction to -2/4 so that both fractions have a denominator of 4.

Next, we add the numerators and keep the denominator the same.

Our total is -3/4 hours. So, for Monday and Tuesday, my son owed me 3/4 of an hour of chores. This is equal to the -45 minutes that we calculated earlier.

Now let's take a look at how to subtract negative fractions.

My college roommate was a math major, and she insisted on turning everything into a math challenge. One day I asked to borrow $10.84 for lunch. She wrote it down to make sure that I did not forget to pay her back. But instead of writing it as dollars and cents, she wrote it as a fraction.

Later that week, she needed some help doing laundry. In return for helping her with her laundry, I would owe $7/2 less of what I owed her for lunch. But of course, she insisted that I work out the calculation as a fraction to figure out how much was left to pay her back. First, I needed to remember that money owed means negative values. I also needed to remember that in math, less means subtract. Next, I had to set up my equation.

The least common multiple between 25 and 2 is 50. So, I need to multiply the first fraction by 2/2 and the second fraction by 25/25 to make 50 the common denominator.

I finish the calculation by adding the numerators together and keeping the denominator the same. The result is -367/50.

Working with negative numbers, or numbers that are less than zero, can be tricky and calculations with negative fractions are especially challenging. Thinking of negative values as amounts owed and remembering to find a common denominator for fractions can take away some of that frustration. Also, remember that subtracting a negative value is the same as adding a positive value.

Multiplying Decimals Rules & Steps | How Do You Multiply Decimals?

What Is a Unit Rate? | How to Find Unit Price

Multiplying Decimals Rules & Steps | How Do You Multiply Decimals?

What Is a Unit Rate? | How to Find Unit Price