Do Spanish adjectives really have a plural form? Do Spanish speakers really say things like 'reds,' 'bigs,' and 'littles?' Sure they do! But in their minds, it doesn't sound funny because all they're really doing is following a grammar rule that you are about to learn.

So, what is a descriptive adjective, anyway? It's a word that describes a noun - a person, place, or thing, of course. Descriptive adjectives are used to talk about the characteristics of both nouns and pronouns, and they include things like personality, appearance, color, size, etc.

In English, we don't change adjectives to 'agree' with the words they're describing. Nice is nice. 'Mateo is nice' is a fine sentence. We don't have to do anything to the word 'nice' for it to be grammatically correct. Spanish, however, is different. In Spanish, 'nice' has to agree in number and gender with the noun being modified, which means that adjectives have four forms: masculine singular, feminine singular, masculine plural, and feminine plural. 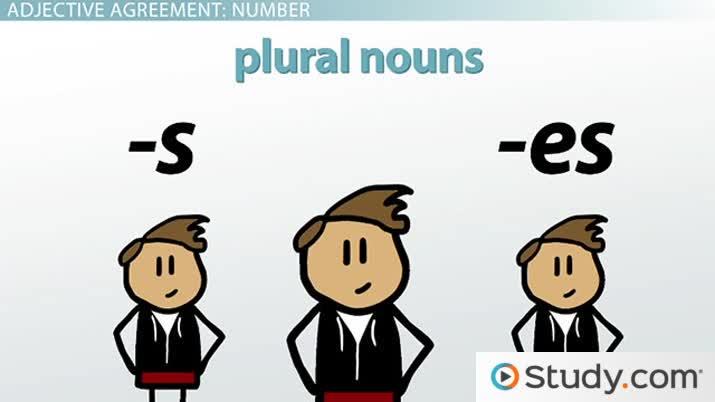 Coming up next: Describing People in Spanish: Practice Comprehension Activity

Let's talk about gender first. Adjectives that end in -o by dictionary definition will remain the same to describe a single masculine noun, but will change to an -a to describe a singular feminine noun. For example, let's say 'the boy is tall.' El chico means the boy. Alto means tall. Alto is masculine, so we don't have to change it: El chico es alto. Alto agrees with chico. Muy bien!

Now, let's say 'the girl is tall.' La chica is the girl. It's feminine singular, so we can't use alto. We have to change alto to alta to agree with chica. So, our sentence is: La chica es alta.

Of course, there's always a 'weirdo' rule: Adjectives that end in -or are different. The good thing is that there aren't many of them - yay! The original -or ending is the masculine singular form. For the feminine singular, however, you add an -a to the end. Let's use the word trabajador (or hard-working) as an example:

Up to this point, all of our examples have been singular, but what about plural nouns? What do we do with them? Their adjectives have to agree, too. Well, we make them plural, which means we add either -s or -es to the end. Let's do a few together:

'The boys are tall.' How do we say the boys? Los chicos. What's the word for tall when we look it up in the dictionary? Alto. Who are we describing? Los chicos. Is los chicos masculine? Yes. Is it plural? Yes. So, we need the masculine plural form of alto. What is it? Altos. So our sentence is: Los chicos son altos. We have los. We have chicos. We have altos.

For all you science people out there, I want you to think of a chemical equation, and I want you to balance it. Los chicos and alto are not balanced. So we add an -s, and voilá! Los chicos son altos. A balanced equation, Spanish-style.

Another one! 'The girls are tall.' How do we say the girls? Las chicas. How do we say tall? Alto. Who are we describing? Las chicas. Is las chicas feminine? Yes, so we change the alto to alta. But, it still doesn't match, does it? Nope - because it's plural. So we add an -s. Las chicas son altas. Yay! Equilibrium.

So, what do we know now? Did you see how alto has four forms?

Let's do another -o adjective this way. What are the four forms of rojo (red)?

Four forms of difícil? It's not an -o adjective, so a couple will repeat:

And one more thing: the rule about mixed gender groups. To describe mixed genders, adjectives ending in -o by dictionary definition will take the masculine form.

So, we've done entire sentences, but what if we want to use phrases within a sentence? In that case, we put the adjective after the noun. For example, the phrase 'tall boy,' in Spanish, will read 'boy tall.' 'Red car' will be 'car red.' Think of it this way - the boy is more important than the fact that he's tall, and the car is more important than the fact that it's red. Nouns take precedence over adjectives in Spanish, so nouns come first in descriptive phrases. So, how do we say 'tall boy?' Chico alto. And 'red car?' Coche rojo. How about 'hard classes?' Clases difíciles. 'Tall boys?' Chicos altos. And 'intelligent girls?' Chicas inteligentes.

Yo tengo mucha comida. = I have a lot of food. Mucha goes before comida.

Cinco and mucha are adjectives of quantity.

Bueno, what have we learned in this lesson? Whew! Mucho!

1. Descriptive adjectives are words that describe nouns and pronouns, like red, big, small, pretty, and hard-working.

They must agree in gender and number according to the noun they're describing. Mixed gender groups take the masculine form.

3. In adjective phrases, the adjective goes directly after the noun:

4. Adjectives of quantity break the rule and go before the noun:

Muy bien! Wow! So much information today! Remember, if you're serious about learning Spanish, work a little every day. Make it a part of your life.

After seeing this video, students should feel more confident about making Spanish adjectives agree with the nouns they describe in gender and in number.