Tara has taught Psychology and has a master's degree in evolutionary psychology.

There have been many studies on the development of personalities of adopted children. Discover the relationship between nature vs. nurture, and learn how the environment in which one is raised influences personality. Updated: 04/08/2022
Create an account

One of psychology's classic debates is known as nature versus nurture. This can be defined by asking the following question: Are genetics more responsible for our behavior and personality, or is the environment? This is a topic that's hard to study because it's hard to pinpoint all of the influences a person has had in his or her lifetime. Adoption studies on personality, however, have provided some way in which scientists can examine the nature versus nature debate.

Children who are raised by adoptive parents who are not their biological parents and are still more like their biological parents that they've never met would be a good example of the power of nature. If, on the other hand, adopted children grow up to be more like their adoptive parents who raised them, then that would be more support for the influence of nurture. Which tends to be the case? The following will describe the outcomes of research on the subject. 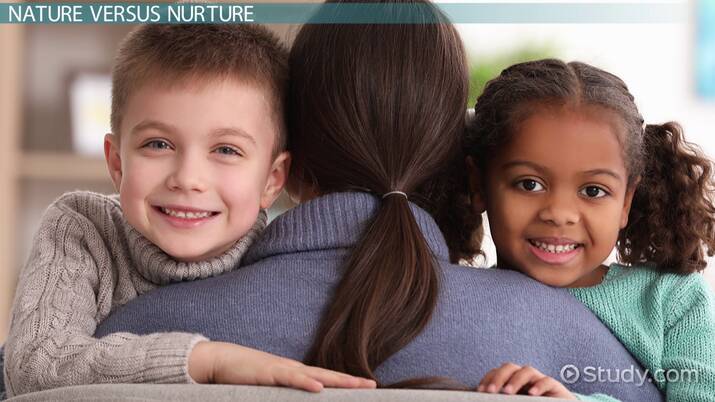 Coming up next: Physical Disorders of the Brain: Effects, Types & Psychological Treatments

Many researchers have examined the personalities of children who were raised by adoptive parents to see how similar their personalities are. After hundreds of adoption studies on personality were conducted, the results revealed that adopted children's personalities are more like those of their biological parents whom they've never met than their adoptive parents who raised them. This effect is especially pronounced for degrees of shyness or outgoingness and agreeableness. This is strong evidence of the power of heritable psychological traits.

What perhaps is even stranger is that studies on macaque monkeys show that baby monkeys reared by foster mothers display behavior more similar to their biological mothers that they've not had contact with than their foster mothers who raised them. Therefore, the powerful effects of genetics on personality go beyond humans.

At this point, you may be wondering: Does parenting even matter? The answer is a clear yes. Although personality traits such as shyness and emotional stability may be genetically based, parenting has an impact on a child's attitudes and beliefs about the world. Adopted children tend to have similar religious and political beliefs, manners, and values as their adoptive parents. Additionally, because adoptive parents are carefully screened, adoptive households tend to be more stable on average than those of biological parents. As a result, adopted children tend to be more social, self-giving, and willing to help strangers, just as their adoptive parents who raised them are.

All right, let's take a moment or two to review. As we learned, one of the great debates in psychology is nature versus nurture, which boils down to one question: Does the environment influence the way we are more or does genetics? According to adoption studies on personality, core personality traits such as shyness or outgoingness and agreeableness are determined mainly by genetics, since children tend to be much more like their biological parents they've never met than their adoptive parents who raised them in these respects. However, this isn't to say that the environment, or in this case parenting, has no effect at all. Children who are adopted tend to adopt the same religious and political beliefs and values as their adoptive parents, suggesting things like that are more environmentally determined.

Biological Differences Between the Sexes: Overview

Genotypic Variation Overview & Examples | What Is a Genetic Variant?

Nature vs. Nurture in Intelligence: Overview & Studies | Is IQ Hereditary?