The adrenal glands sit on top of your kidneys. These are endocrine organs, which means that they secrete hormones directly into your bloodstream. When we take a look inside an adrenal gland, we see that it looks like two different structures. There is the central area called the adrenal medulla, which is enclosed by the adrenal cortex. The adrenal cortex is the outer portion of the adrenal gland that secretes steroid hormones. There are three major groups of steroid hormones known as mineralocorticoids, glucocorticoids and sex hormones. In this lesson, we will learn about two of those groups, the glucocorticoids and the sex hormones. 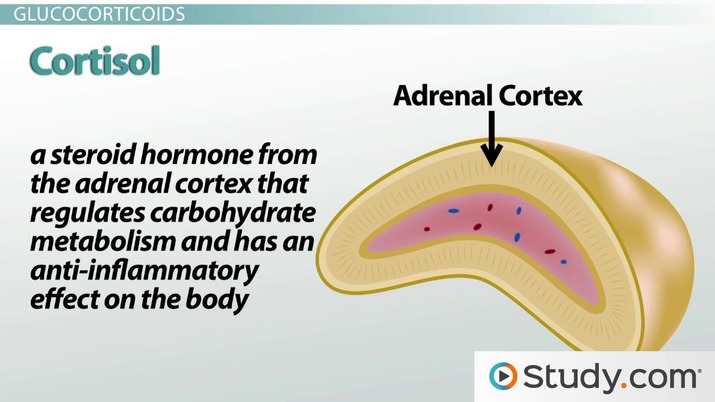 Coming up next: Adrenal Cortex: Aldosterone and Body Fluid Balance

The adrenal cortex is actually comprised of three layers, and the middle layer is where we see the production of glucocorticoids. Glucocorticoids play an important role in the body. They promote carbohydrate metabolism and help the body cope with long-term stressors. The term 'glucocorticoid' is easy to recall when we break the word down. The prefix 'gluco' refers to glucose, which is the main carbohydrate we see being metabolized, and the suffix 'corticoid' refers to the adrenal cortex, where the hormones originate. We see that glucocorticoids are secreted from the adrenal cortex only after the cortex is stimulated by the hormone adrenocorticotropic hormone (ACTH). ACTH comes from the anterior pituitary gland, which we recall is often referred to as the 'master gland' because its hormones influence so many other glands, such as the adrenal cortex.

Interestingly, ACTH is secreted in response to stress. Therefore, we can see how stress ultimately triggers the release of glucocorticoids, which then in turn help us deal with the stressor. The stress we are talking about here is long-term stress, such as prolonged fasting or prolonged exercise or even prolonged emotional stress, such as the loss of a loved one.

When glucocorticoids are released, we see blood glucose levels rise. This is partly because glucocorticoids promote gluconeogenesis, which we recall is the increased synthesis of glucose from molecules that are not carbohydrates, such as proteins and fats. This additional glucose can be utilized by your body cells for extra energy during the stressful period.

The most important glucocorticoid in your body is called cortisol. We can define cortisol as a steroid hormone from the adrenal cortex that regulates carbohydrate metabolism and has an anti-inflammatory effect on the body. Cortisol is also called hydrocortisone. While all glucocorticoids help the body deal with inflammation, you may be familiar with the term 'hydrocortisone' because it's sometimes produced synthetically and turned into a medication that is used to treat a wide range of inflammatory conditions from skin disorders to arthritis.

Androgens are steroid hormones, such as testosterone. They control the development and maintenance of masculine characteristics. We did note that even women have the production of androgens from the adrenal cortex. This is typically in small enough amounts that masculine characteristics do not develop. However, if there is a hyper-secretion of the androgens due to a problem with the adrenal cortex, it could result in masculinization of the woman. For instance, the woman could develop a beard and other masculine qualities.

After watching this lesson, you will be able to:

What is an Antigen-Presenting Cell? - Definition & Types

How Antipsychotic Drugs Work in the Brain

Actions of Drugs on the Body: Pharmacodynamics