The United States has come a long way from its origin. If we think back as recent as the 1960s, we can see that the U.S. went through a great amount of change to stop discrimination of individuals based on color or gender. This change was not an easy one to make, yet the United States developed a federal agenda that began a course of equality for all people.

One of the results of this work was affirmative action. Affirmative action, initiated in the 1960s, focused on counteracting historical discrimination faced by ethnic minorities, women and other groups that were typically not represented, especially in the workplace or education institutions. Affirmative action resulted in policies that are meant to include minority groups and thereby increase diversity in an organization or business. 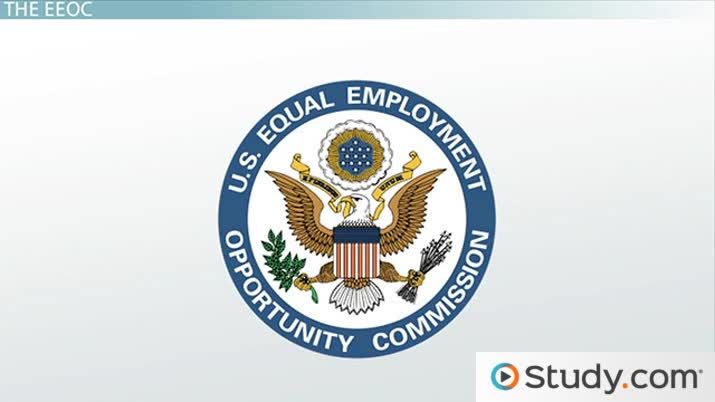 Coming up next: Human Resource Management: Hiring and Staffing

Affirmative action was first introduced by President Kennedy in 1961 as a method to address discrimination and civil rights. What Kennedy started, after his assassination, President Johnson finished. The act focused mainly on education and jobs and enacted measures so that blacks and minorities would enjoy the same opportunities as whites. Examples of those opportunities could be promotions, pay increases, admission to schools and financial aid. Essentially, it covered any number of aspects that were unavailable or more difficult to obtain for minorities prior to affirmative action being enacted.

From affirmative action sprang the U.S. Equal Employment Opportunity Commission, or EEOC. This commission is responsible for enforcing the laws that make it illegal to discriminate against a job applicant for their race, color, religion, sex, national origin, age or disability. Taking this a step further, the EEOC also enacts laws that make discrimination illegal against someone who complains about discrimination, anyone who has filed a charge of discrimination or in any way joins in on a discrimination lawsuit; thus, protecting individuals of all different backgrounds, religions, races and sexes from any type of discrimination that could be present. The EEOC laws cover almost all organizations, and these laws pertain to labor unions and employment agencies alike. Thus, no organization is exempt from equal opportunity laws.

The EEOC has the authority to investigate any charges or issues that are presented to them by any individual. Their role is to investigate the issue, review the allegations without bias and develop their findings. It is important to note that the EEOC wants to fix any discrimination issues that might arise, but that cannot happen unless they can bring a lawsuit against the parties involved.

Let's look at an example of the process or power the EEOC has. Ben, an African-American, filed suit against an organization after interviewing with them several times and was asked to change his hairstyle to look more professional. The lawsuit ended with the organization required to pay $100,000 to settle the suit.

It's important to keep in mind that these laws affect all people, even those who are considered a minority in a certain location. For instance, in a case that is not well known, a white manager filed suit against his Hawaiian boss for racial comments the Hawaiian boss made to him. The company had to pay $120,000 in fines.

Affirmative action was a huge step forward for the United States. For the first time, minorities would not be discriminated against. In many ways, affirmative action leveled the playing field for all individuals who wanted to apply for any position, scholarship or reward based on their merit. This allowed them opportunities regardless of the color of their skin, gender, religion or their origin. The establishment of the EEOC put a legal face to affirmative action. What affirmative action started, the EEOC framed out in very specific laws and legal actions, should they be required.

The material found in this video lesson might encourage you to:

Ch 1. Roles and Responsibilities of the...
Ch 2. Function of Management
Ch 3. Planning and Controls as Management...
Ch 4. Organizing as a Management...
Ch 5. Leadership in Management
Ch 6. Staffing and Labor Management in Organizations
Ch 7. Managing Diversity and Global...
Ch 8. Communication as a Supervisor
Ch 9. Studying for Business 111

Being a Role Model for Supervisors

Leadership in Action for Coaches

Collaborating Effectively as a Team at Work

Resolving Work Conflict as a Team