Affirmative action is voluntary guidelines for companies to follow to make sure they are creating diverse working environments in accordance to Title VII. Learn who are the protected groups and about adverse impacts from being treated unfairly. Updated: 09/17/2021
Create an account

A diversified workforce is built on three principles: affirmative action (AA), equal employment opportunity (EEO) and diversity. Companies are embracing diversity in order to remain competitive in the global world. Unfortunately, this was not always the case. In order to help rectify years of discrimination, legal acts were passed in the United States. In 1964, the Civil Rights Act was passed. It included a specific piece of legislation called Title VII, which protected against employment discrimination on the basis of race, ethnic background, gender or religious practices. The idea behind the legislation was that it would level the playing field and give everyone an equal opportunity.

The Civil Rights Act also gave birth to the federal agency, the Equal Employment Opportunity Commission (EEOC). This agency was to police any discrimination in organizations. The legal changes created a new concept for organizations to follow called affirmative action, which consists of voluntary guidelines for companies to follow to make sure that jobs are available to qualified individuals regardless of sex, age or ethnic and religious background. Let's take a look at how affirmative action works within an organization's walls. The two keys terms that will help explain the focus of affirmative action are protected groups and adverse impact. 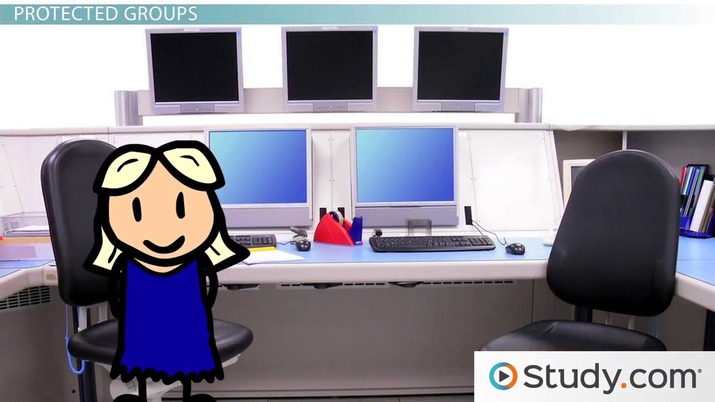 Coming up next: How Organizations Promote Work-Life Balance: Definition and Common Practices

Deema is a worker at a fruit wholesaler. She is a practicing Muslim, and she wears a hijab (or head covering) to work each day. She has worked for the fruit company for over a year. In the past year, she has excelled in her job and recently applied for a promotion in the accounting department. Her competition is another woman who did not have the same amount of experience as Deema. Unfortunately, Deema did not get the position, and she has recently found out through coworkers that it was due to the fact that the accounting manager felt that Deema's dress was inappropriate at work. Deema heard that the boss said that Deema was being disrespectful by wearing a 'hat' at work. Deema would be considered a member of a protected group since she has been identified as a previous target for employment discrimination.

Deema was treated unfairly, so she was facing an adverse impact. This is when members of a protected group are treated unfairly by an employer's personnel action. Deema called for an investigation. She contacted the state agency who investigated Deema's claims and found out that she was correct in her assumption that the company was in violation of the guidelines established for affirmative action. Deema's experience should have been considered for the position, and her head attire should not have been a factor.

Deema's example shows that in order for affirmative action to be successful, companies need to document and measure their organization's strengths and weaknesses in promoting diversity. Companies can conduct a cultural audit to see how diverse the organization really is according to gender, race, ethnicity and religion. A diverse workforce is invaluable and needed if the organization wants to be successful in today's market. Any manager or employee who is uneducated about diverse cultures needs to attend cultural training classes. In Deema's case, her boss received a reprimand from the state, and he had to attend extensive diversity training classes.

Affirmative action consists of voluntary guidelines for companies to follow to make sure that jobs are available to qualified individuals regardless of sex, age, or ethnic and religious background. Protected groups are groups that traditionally have been discriminated upon in the past. When members of protected groups are treated unfairly, they are facing adverse impacts. Companies need to make sure that they are creating diverse working environments in accordance with Title VII.

Upon finishing this lesson, you should be able to recognize how Affirmative Action and Title VII help create and maintain more diverse workplaces throughout the United States.

Affirmative Action: Definition and Effects on Diversity in the Workplace
Related Study Materials

What Is a 360 Degree Appraisal? - Definition & Examples

What is Conflict? Sources & Types

Functional vs. Dysfunctional Conflict in Organizations: Differences and Mediation