There is so much human history to study, have you ever wondered if we can approach it all? In this lesson, we'll talk about categorizing history through technology and discuss periods of major technological changes.
Create an account

Humans have a lot of history. Have you ever tried to study absolutely all of human history? It's practically impossible to do. So, as historians, we take some shortcuts and try to find ways to organize historical moments by shared trends. One method of organization that scholars have found particularly useful is grouping the use of technology into ages.

As a species designed for tool-making, technologies define our lives, now and throughout history. These categories are used more for academic purposes; it's not like people woke up one day and realized they were in a new period. The date ranges on these periods can also vary drastically because people in different places developed new technologies at different times; just because one group started using a new tool doesn't mean everyone did. However, these categories can be pretty useful when trying to tackle the huge amount of information that is human history. 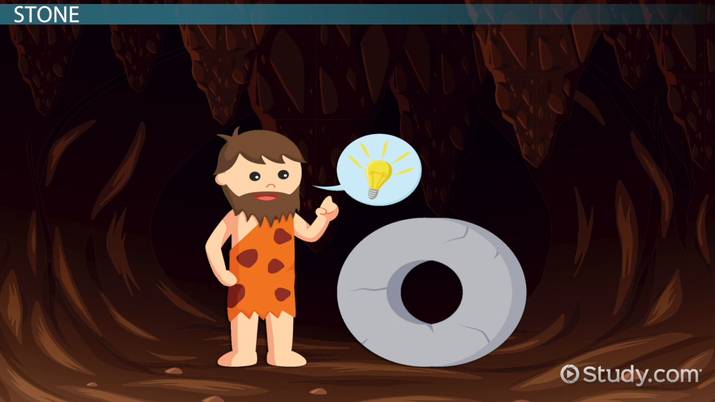 Coming up next: Akkadian Empire Government

Depending on who you ask, there are up to ten accepted technological ages in human history. Not all are used by everyone, but we'll cover each of them briefly. The first is the Paleolithic, which means Old Stone Age. Human tools in this era were, yes, made of stone, but also other easy-to-obtain materials, like wood or bone. Human societies in the Paleolithic were mostly small bands of nomadic hunter-gatherers. This period covers over 99% of human history, ranging from about 600,000 BCE to around 10,000 BCE in some parts of the world, and even later in others.

The end of the Paleolithic is defined by new changes in lifestyles as people first developed settled societies, based on farming. But, this wasn't an easy process. The transition out of the Paleolithic is often considered its own time period called the Mesolithic, or Middle Stone Age. People were still using stone tool technology, but were starting to domesticate plants, allowing them to stay in one place longer. This led to the need for new innovations, like baskets, and in some cases, pottery. Most historians place the Mesolithic as roughly 10,000-4,000 BCE in most places.

Finally, many human societies became fully agricultural, living year-round in permanent societies. This was the Neolithic, or New Stone Age. In the Neolithic, people built houses, developed pottery, and for the first time in history began producing more food than they could eat. As a result, some people could focus more on new inventions like pottery, others could become warriors, and others became leaders. Of the new inventions to enter the world, the wheel may have been the most significant. In most places, the Neolithic occurred between roughly 4,000 and 2,300 BCE.

The previous three ages are collectively known as the 'Stone Age,' and were defined by technologies made of stone. But we don't use stone tools as often today. At one point, human societies switched to the use of metal. Like the transition out of the Paleolithic, this was not an immediate change, and we've got another period of transition here called the Chalcolithic, or Copper Age. Copper is relatively easy to mine, smelt, and work, and in many places it was the first metal to be used for tools, jewelry, art, and weapons. The Chalcolithic occurred around the 3rd millennium BCE.

Human societies fully turned towards the use of metal in the Bronze Age. During the Bronze Age, people learned to mix copper and tin to create a stronger metal, bronze, and used it everywhere they could. But, bronze wasn't the only change in this era. New technology meant better agricultural practices, and societies grew much larger, forming the first true kingdoms and empires. Things like writing, philosophy, mathematics, and international trade appeared. The Bronze Age is generally considered to cover the time frame of roughly 2,300 to 700 BCE.

Bronze is swell, but not a perfect metal. So, people kept innovating and eventually found better ways to process metal, making iron. The Iron Age saw stronger, more efficient tools that redefined agriculture, the arts, and warfare. Military empires, armed with iron weapons, fought for control of trade routes. Artists, armed with iron tools, carved marble and other materials into astounding sculptures. The Iron Age began around 700 BCE, but its end date is contested because people used iron for millennia. However, the social and cultural changes of the Iron Age waned by around 450 CE.

The collapse of the mighty empires of the Iron Age led to the start of the Middle Ages, which were defined by kingdoms who existed in near-perpetual states of war, but there were also new technological advancements. Wrought iron, an even stronger kind of iron, became widespread, and with this material came things like horseshoes, cannons, and clocks. The Middle Ages lasted from roughly 450 to 1400 CE.

Then, in the 1300s, the Mongol Empire conquered China and opened up all of Eurasia to a massive set of trade routes known as the Silk Roads. Money, ideas, and people swept around the world, and new city-states emerged with economic dominance. This was the Renaissance. We often associate this period with the massive development of the arts, but there were also some dramatic technological changes. Boats, telescopes, compasses, and clocks all improved, and many people took to the sea to find new trade routes. For this reason, many also call this the Age of Exploration, and it lasted from around 1400-1750 CE.

In the 18th century, innovators caught up in a philosophical movement called the Enlightenment started creating machines that could produce perfect scientific experiments. It wasn't long before these machines became larger and more complex. They were first powered by steam, then electricity, but industrial technology reshaped the world in every way. The first Industrial Revolution kicked this off around 1750, and the Industrial Age lasted until about 1950.

Lastly, after World War II, news technologies began to emerge based around the use of this new thing called a computer. Since then, computers changed how people communicated, making things possible that were never imaginable before. Most historians call this the Information Age, since communications technology drives industry. This is where we are today. So, what's next? Space Age? Only time will tell.

Human history is a big topic, but historians have found ways to categorize it based on the dominant technologies of different ages. We start with the Paleolithic, during which stone tools defined life for nomadic hunter-gatherers. From there, people started transitioning to agricultural societies in the Mesolithic. In the Neolithic, many people were fully agricultural, and civilizations emerged. After that came the Chalcolithic, in which metal first emerged through copper tools. This was refined into the Bronze Age, with the widespread use of bronze; and then the Iron Age, which saw the emergence of iron tools and weapons.

As Iron Age empires collapsed, we moved into the Middle Ages, which were defined by kingdoms who existed in near-perpetual states of war, before we emerged from that into a period of wealth and exploration called the Renaissance. In the 18th century, the development of industrial machines led to the Industrial Age, which lasted all the way to the 1950s and the rise of computer technology in the Information Age. That's a lot of history in a little amount of time!

The History of Technology in Education

What Is a Technological System?

Technologies of the Neolithic Era

Impact of Technology & Math on Science

Extending & Connecting Learning Beyond the Classroom

Examples of Technology in the Classroom