Catherine has taught high school science and has a master's degree in biology.

Agglutination is the grouping of foreign bodies by the immune system to isolate them from harming the body. Learn the role of antigens and antibodies, as well as examples of the direct and indirect agglutination tests. Updated: 11/16/2021
Create an account

Imagine pouring a bowl of cereal and accidentally spilling it on the floor, leaving flakes scattered all around. What do you do? Most likely, you'll grab a broom and dust pan. You'll then use the broom to collect the cereal flakes into a nice pile, making it easier to get the cereal into the dust pan.

The human immune system has a similar system for handling foreign substances, which have entered the body. Think of the spilled cereal flakes as invading bacteria, toxins, fungi, or viruses. Your immune system can deal with these foreign bodies by consolidating them, just as you would collect a mess by sweeping it into a pile. This clumping process is called agglutination, and it helps to inactivate the invader to protect your body from harm. 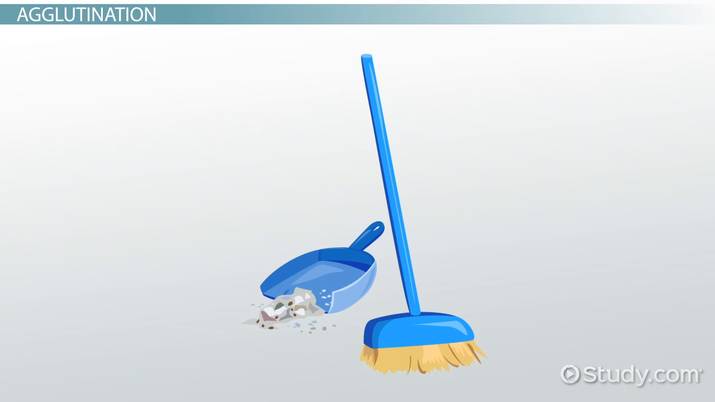 Coming up next: Alphaproteobacteria: Definition & Characteristics

The agglutination process involves two key players: antigens and antibodies. Think of the antigens as the unwanted spilled cereal, and the antibodies as the broom. Antigens are foreign bodies, such as bacteria, viruses, or other substances. Antibodies are proteins made by the immune system which specifically bind to antigens. There are countless antibodies made precisely to interact with certain antigens.

The immune system can use agglutination to render an antigen harmless by forming an antigen-antibody complex. This complex forms when an antigen is surrounded by an antibody with the unique capability to bind to that antigen. The antigen is then chemically bound by and subsequently held together by that antibody. When a clump of antigen-antibody complexes occurs, it is called agglutination, which helps cells in the immune system called phagocytes ingest the invading substances, rendering them inactive.

Not all antibodies are created equal when it comes to successfully causing agglutination reactions. The antibody immunoglobulin G (IgG) is shaped like a two-pronged fork. It binds to an antigen in the same way we poke our food with a fork. Immunoglobulin M (IgM) is a group of antibodies that are vastly superior to IgG at causing agglutination because of their configuration. They are shaped like a five-legged spider, with each leg also having a two-pronged fork. Each prong can bind to an antigen, allowing IgM to pull many antigens together at the same time.

Agglutination is a process frequently used to determine whether someone is fighting a specific illness. Direct agglutination tests use the body's serum, which is the part of the blood that contains antibodies. In a plate that contains many small wells, called microtiter plate, serum and large antigens, such as bacteria or fungi, are combined.

If the blood-antigen mixture falls to the lowest center of the well, then the reaction is negative, meaning agglutination did not occur. However, if the mixture clumps together, it will form a mat across the bottom of the well. This is a positive sign that agglutination occurred because antibodies against that antigen were present.

However, with a single test it is difficult to determine whether a person has antibodies left over from a prior illness, or if he or she currently has the infection. For this reason, a titer is performed in the microtiter plate. A titer is a series of dilutions of the body's serum that determines the smallest amount needed for an agglutination reaction to occur.

During the course of an illness, multiple assays may be performed. If there is a rise in titer, then the level of antibodies in the serum has increased and it is likely they are currently fighting against the antigen being tested. This test is commonly used in diagnosing patients with typhoid fever by determining if there is a rise in titer against the bacteria Salmonella typhi.

During indirect (passive) agglutination tests, the antigen is first adhered to bentonite clay or small latex spheres. Once the antigen is attached to these spheres, the serum is added to the mixture. As in the direct agglutination test, the particles clump if they are positive for antibody and agglutination has occurred. Inversely, antibodies can also be coated onto the clay or latex to determine to which antigens they bind. This process is frequently used to test for strep throat, which is caused by the bacteria Streptococci.

The agglutination process is one way that the immune system attacks a foreign body, such as bacteria, viruses, or toxins. Antibodies are proteins made by the immune system specifically to attach to foreign substances, or antigens. When antibodies, such as IgG and IgM, bind the antigen, it forms a clump in a process called agglutination.

Agglutinins & Agglutinogens in the Immune System