Definition of an Agricultural Society

An agricultural society, also known as an agrarian society, is a society that constructs social order around a reliance upon farming. More than half the people living in that society make their living by farming.

People in an agricultural society generally lead a more settled lifestyle than those in nomadic hunter-gatherer or semi-nomadic pastoral societies because they live permanently near the land that is farmed. Agricultural settlements tend to develop in areas of convenience near bodies of water, which is used for both crops and transportation, or along trade routes. Not everyone in an agricultural society is a farmer. Some people make a living trading or making and selling goods such as tools used for farming. 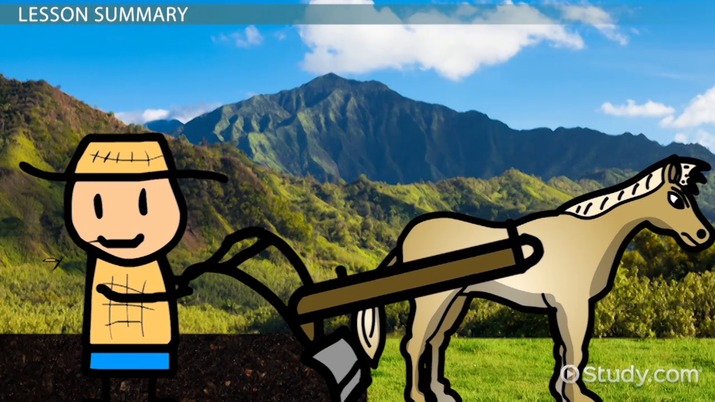 Try it now
Back
Coming up next: The History of Margarine

In general, citizens of contemporary nations like the United States enjoy a lot of social mobility. Social mobility is the ability that individual citizens have to move from one class into the next. Ideally, someone who grew up in a lower class can work hard, become educated, and get a job that would allow him to become a member of the middle or upper class. Similarly, if someone from an upper class does not have a job that earns a high salary, it is possible they will drop from an upper to a lower class.

In a feudal society, a king owned all the land. The king allowed other, less powerful nobles to own and work portions of the land in exchange for a pledge of military support in the form of knights, soldiers, and goods. The land was then further divided by these lords among vassals with their own resources to loan to the lord. Commoners were allowed to work the land in exchange for protection and a small share of the resources they helped gather. In an ideal feudal society, the lowest tier of the social order, the serfs, benefited wholly from providing labor for their lord's interests. In reality, serfs were practically slaves and had little if any form of mobility. They were essentially attached to the land they worked.

As previously mentioned, not everyone in a large agricultural society was a farmer or was immediately dependent on farming. Some people lived in cities. They performed different jobs, such as teaching, making and selling goods such as military weapons, or constructing roads or ships. People living in cities were often better educated and enjoyed more personal mobility than those tied directly to the land. Growing cities with a variety of needs gave rise to the earliest forms of craft and merchant specialists.

The middle class began to have a serious urban presence. The construction of roads and use of waterborne trade helped to feed growing city populations and set up trade relations between cities far-removed from one another. However, social mobility was still low. Even people in the cities survived by keeping the ruling class supplied with what they wanted. And mobility was still limited by things such as heritage, so noble-born individuals had much more to look forward to than commoners. It was difficult or impossible to advance because of hard work alone, even though working hard was expected of those born to the working classes.

As might be expected, goods associated with agriculture were the basis of most trade. This included such things as grains and vegetables, but also included beasts of burden and farming implements. Animal labor formed one of the most widespread innovations of agricultural societies.

The use of metal in an increasing variety of tasks began during this period as well, as craftsmen had the time to perfect techniques for their manufacture and use. The use of the plow and beasts of burden to till a variety of soils helped to farm a wider variety of types of land.

Trade was facilitated through naval power, with merchant ships using major waterways as natural highways for delivery and pickup of goods. Roads could be used for fair trade as well, but this was slower, a bit more dangerous, and couldn't move the amount of goods that naval trade could. Trade between larger agrarian societies helped facilitate the development of currency. Trade goods were bulky and not always easy to transport long distances between metropolitan areas. Currency, usually in the form of precious metal coinage, was developed to help people have something of value that was easy to trade.

What is In-Group in Sociology? | In-Group & Out-Group Bias & Examples