In algebra, numbers fall into one of two categories: algebraic or transcendental. It's important to understand the difference between algebraic and transcendental numbers because these numbers are the basis for algebra and higher math. 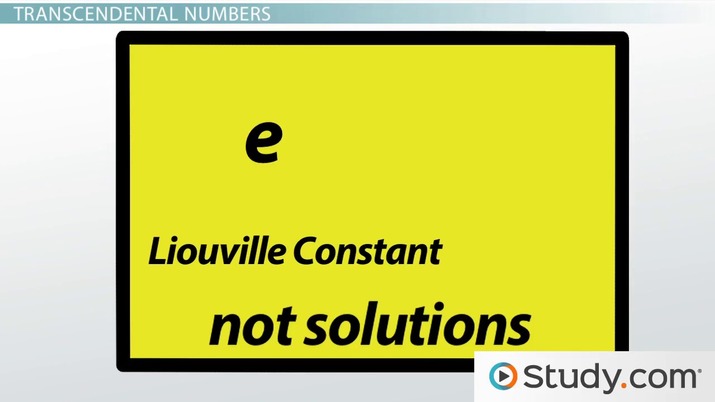 Coming up next: Understanding Numbers That Are Pythagorean Triples

Here are a few examples of transcendental numbers.

The Liouville constant, the constant e and the number pi are all numbers that you can't get by solving a polynomial with rational coefficients. It doesn't matter how hard you try!

How Common Are These Numbers?

Imagine for a minute we have a bag that contains an infinite number of letters and spaces. You can draw out as many as you like, but you have to place them in the order that they're drawn. How often do you think you'd end up with a proper sentence versus complete nonsense?

Now, even though you've been doomed to repeat this exercise forever, you decide to take a short break after you've done it only a few zillion times. As you look over all the combinations with your really sharp eye, you spot three combinations that are actual sentences. The sentences were pretty easy to count, so we'd say they were countable. If you then tried to count up all of the other combinations, you'd likely lose hope due to the huge number of them and say that they were uncountable.

Now can you remember what we've just covered?

After you are finished with this lesson, you should be able to:

In the following practice problems, students will apply their knowledge of algebraic and transcendental numbers to determine which number from a list is algebraic. Students will also find a polynomial with rational coefficients for which certain algebraic numbers are solutions.

2. Show that 3i is an algebraic number by finding a polynomial with rational coefficients that has this number as a solution.

3. Your friend Cameron has claimed that the square root of 5 is a transcendental number, since it is an irrational number.

We can multiply both sides of the equation by 31 to get a different polynomial equation with integer coefficients for which 17 / 31 is a solution:

Moving the -9 to the other side of the equation, we have a polynomial with rational coefficients, set equal to zero, for which 3i is a solution.

Subtracting 5 from both sides of the equation gives a polynomial with rational coefficients, set equal to zero, for which the square root of 5 is a solution:

Use and Misuse of Assessments in the Classroom

The Closure Property of Real Numbers

The Relationship Between Pascal's Triangle & Combinations

Difference Between an Open Interval & a Closed Interval

What is a Continuous Spectrum? Examples