Amanda has created and taught English/ESL curricula worldwide, has an M.Ed, and is the current ESOL Coordinator for the Saint Louis Public School District.

In this lesson, we will explore allusions used in Sophocles' Antigone. We will focus mainly on allusions to Greek mythology and why those allusions have such significance in events of the play. Updated: 05/23/2021
Create an account

In this lesson, we will be focusing on allusions as they're used in Sophocles' Greek tragedy, Antigone. However, first thing's first, what is an allusion? An allusion is a literary device used when a writer references a historical event, person, place, piece of literature, or event. This is usually a brief description and is in no way a detailed account of the person or literary work to which it is referring.

So why does a writer even use allusions? To confuse you? To make you do more research? The answer is writers use allusions as a sort of short cut. When making references, writers are able to call upon emotions or understandings readers may have already established to the works being alluded to. This is faster, and oftentimes more effective, than recreating long descriptions or extensive backstory.

Within Antigone, allusions are mainly made to Greek mythology because, you've guessed it, we are dealing with the gods! Many of the characters in Antigone make reference to, or ask for help from, the gods throughout the play. This is where many of the allusions come in! Allusions bring in emotion and understanding, where there otherwise may not be any. Knowing why a character calls upon a particular god or goddess in desperation, or alludes to a particular god or goddess who has been wronged, can help you better understand the depth of the situation at hand. Let's now take a closer look at some of the allusions found in the play. 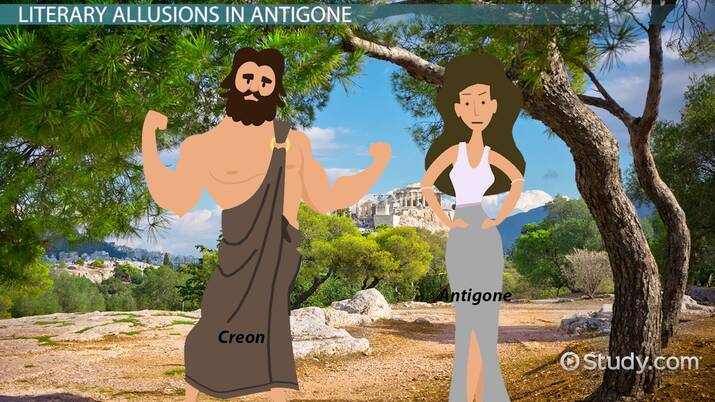 Coming up next: Foreshadowing in Antigone

There is a great deal of power struggle going on in Antigone. The characters and Chorus frequently discuss honoring the will and power of Zeus, the ruler of the Olympian gods, the skies, Earth, and father of all men. He represents all laws and maintains order that governs both natural and spiritual worlds. In Greek mythology he is seen as the presiding deity of the universe and is a symbol of power.

At the end of the play when Creon is unable to save his son and his wife, allusion is made to the goddess Nemesis, an incarnation that can come as a challenge, which someone is unable to defeat, as a form of punishment for his violation of the laws of the gods. When all is lost, Creon finally laments his errors, and acknowledges his faults.

As Antigone makes her way to the cave where she is being sent to captivity, allusions are made to other gods and goddesses who have suffered the same fate. Antigone references Niobe, a former Queen of Thebes that turned her into a tear-shedding, stone column because of her ego. Antigone feels she will die in isolation, like Niobe, without anyone to mourn her. However, the chorus tries to tell her she should feel powerful, like a goddess, not weak.

The chorus alludes to another goddess, Danae, when they speak of how Antigone will be locked away in a cell where sunlight cannot touch her. Danae, was the daughter of King Acrisius, who was locked away in a tower when prophecy stated her son would kill her father. The chorus is saddened to see what will become of Antigone, even though they agree she has gone too far.

Death plays an important role in the play, especially when it comes to Antigone. Acheron, the rivers in the underworld where souls travel upon their death, is referenced by Antigone when she alludes to her impending journey to death upon condemnation to the cave.

Also referenced is Hades, ruling god of the underworld, who is also known for watching over only those who have been properly buried, and Persephone, the daughter of Ceres, who was temporarily trapped into the underworld after being kidnapped by Hades. Antigone references meeting both when speaking of the death march she will soon make to the underworld.

There many different types of conflict going on in this play:

Allusions are made to help us better understand the actions characters take in reaction to those conflicts. The Fates, also called the Furies, three goddesses who control mortal lives and avenge the crimes against kinship, are referenced when discussing the wrongs committed by Eteocles, Polyneices, Creon, and Antigone.

When discussing the great conflict between Antigone's brothers and her subsequent punishment for overstepping her boundaries, the chorus alludes to Dionysus and the son of Dryas. Dionysus, also known as Bacchus, the god of wine, fertility, and revelry, had once been attacked by the son of Dryas. As punishment for this attack on the god, the son of Dryas, inflicted with madness, ended up killing his own wife and son, and was then imprisoned in stone.

All right, let's now take a moment to review. As we learned at the outset, allusions are references writers make to historical events, persons, places, pieces of literature, or events. Writers use allusions to call upon emotions or understandings readers may have already established to the works being alluded to.

Allusions to Greek mythology are used in Antigone, since this is a Greek tragedy that deals with the gods. Understanding the allusions to gods will help readers better understand the extent of desperation, anger, and despair behind the characters' emotions and actions throughout the play.