View bio
Allusions are references to other literature or historical events, a literary device used in Shakespeare's 'Macbeth'. Identify significant allusions to a variety of myths and biblical content integrated into this famous play. Updated: 12/21/2021
Create an account

Have you ever called someone a Scrooge? Have you ever felt like the weight of the world was on your shoulders? Or have you had a moment where you thought you were a real Einstein? In all of these examples, you were experiencing a moment of allusion.

Throughout his writings, William Shakespeare used allusions as a literary element. His play Macbeth contains several mythical and biblical allusions that show Macbeth's character and his fear of judgment as he gives into his ambition. 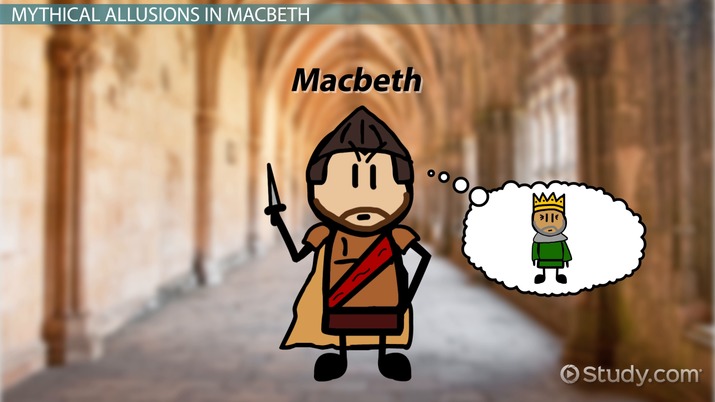 Coming up next: Foreshadowing in Macbeth

One of the most common comparisons made by Shakespeare were allusions to mythology, or a collection of myths.

In Act I, Scene II, Ross arrives to deliver the news of Macbeth's victory in battle to King Duncan. He describes Macbeth storming into Norway, '…till that Bellona's bridegroom, lapp'd in proof, Confronted him with self-comparisons.'

Shakespeare's audience would have recognized Bellona, the Roman goddess of war, and understood that Macbeth was a hero with godlike qualities. This moment is important in the play because King Duncan decides to name Macbeth Thane of Cawdor, which begins to fulfill the witches' prophecy.

A second allusion to mythology is found in Act II, Scene I. As Macbeth waits for the sign to kill King Duncan, he delivers his bloody dagger monologue. In the monologue he says, 'witchcraft celebrates Pale Hecate's offerings.'

Hecate, the daughter of Zeus in Roman mythology, was a magician who guarded over magic and taught witchcraft. In the play, Macbeth believes that the three witches have made their offerings to Hecate with him. Later in the monologue, Macbeth says, 'With Tarquin's ravishing strides, towards his design.' In this line, Macbeth is comparing himself to the Roman ruler Tarquin, who raped and murdered his cousin's wife, Lucretia, in the fifth century B.C. Like Tarquin, Macbeth is preparing himself to attack and take from a virtuous person. When Macbeth does act, he begins to lose his own virtue.

After Macbeth kills King Duncan, he looks at his hands and says, 'Will all great Neptune's ocean wash this blood clean from my hand?' Neptune was the Roman god of fresh water. Macbeth is asking if Neptune's waters would be enough for the blood to come clean from his hands.

Another mythological allusion is found in Act III, Scene II. As Macbeth worries that Banquo may know too much about the witches' predictions, he is reassured by Lady Macbeth that Banquo and his son Fleance can be killed. In response he says, 'ere to black Hecate's summons.' Macbeth plans to kill Banquo when Hecate summons the night. Like his earlier comparison to the witches sacrificing for Hecate, Macbeth too is fulfilling his sacrifice to the witches and protecting his rule as king.

Finally, the last scene of the play contains one of the most powerful mythological allusions. As Macduff confronts Macbeth he says to him, 'Turn hell hound, turn.' The term 'hell hound' refers to Cerberus, the Greek guard of the underworld. Macduff is saying that Macbeth has taken the crown, has guarded it with evil, but it will now be taken back from him.

In Act I, Scene II, a captain arrives to tell King Duncan about Macbeth's victory in battle. He tells the king about a second army arriving and Macbeth and Banquo fighting the new group, 'Except they mean to bathe in reeking wounds, Or memorize another Golgotha, I cannot tell you.' Golgotha, or the place of the skulls, is a reference to the place where Christ was crucified. The captain is describing the new battle as so bloody that Macbeth and Banquo may have been trying to make it as famous and even shocking as Christ's death.

Although Macbeth was described earlier as heroic, Macbeth later describes himself very differently. As he plots to kill King Duncan, Shakespeare alludes to a passage about Judas, the disciple who betrayed Jesus, when he writes, 'If it were done when tis done, then 'twere well It were done quickly.' This is very similar to when Judas is told by Jesus, 'That thou doest, do quickly.'

After Macbeth kills King Duncan, Lady Macbeth tells him, 'Go get some water and wash this filthy witness from your hand.' In the Bible, the Roman prefect Pontius Pilate, before sending Jesus to his death, is said to have washed his hands before the crowd, saying, 'I am innocent of the blood of this just person.' This same reference is made later in the play when Lady Macbeth sleepwalks, trying to wash the blood off her hands. In both of these examples, Macbeth is being portrayed as someone who has turned against an innocent person.

Shakespeare also references judgment and punishment in Macbeth's actions. It is Macbeth who first believes he should be punished when he says, 'Mine eternal jewel given to the common enemy of man.' Macbeth believes that his soul, his 'eternal jewel,' should be given to the devil.

In Macbeth, William Shakespeare uses many allusions, but especially mythological and biblical ones. In one of the earliest descriptions of Macbeth, Ross describes him as the bridegroom of Bellona, the Roman goddess of war. The gods Hecate and Neptune, as well as the Roman ruler Tarquin, are also referenced. Finally, as Macduff prepares to kill Macbeth, he calls him 'hell hound' a reference to Cerberus, the guard of the underworld.

In addition to the mythological allusions, Shakespeare also uses biblical allusions to describe Macbeth. In the first act, Macbeth's battle is compared to Golgotha, the place where Christ was killed. Later, as Macbeth waits to kill Duncan, he compares his action to those of Judas, who betrayed Christ, and Pontius Pilate, who sent him to his death. Finally, after Macbeth kills the king and Banquo, he acknowledges that he deserves punishment, saying that his soul should be given to the devil.

For this activity, you will further your understanding of Shakespeare's use of allusions in Macbeth through critical analysis. Make sure to answer all of the questions completely and thoroughly. It is also important to use specific details from the text whenever possible to support your answers.

Conflict in The Pearl

Witchcraft in the Jacobean Era

Banquo & Macbeth | How Does Macbeth Change Throughout the Play?

Quotes About Blood in Macbeth