Derek has a Masters of Science degree in Teaching, Learning & Curriculum.

Teaching the alphabet is a large part of teaching preschool and kindergarten. Explore some activities to teach the alphabet in the classroom, including learning about the letter of the week, creating activities for writing, and identifying letters through images and sounds. Updated: 10/25/2021
Create an account

This lesson will follow the plans of a kindergarten teacher, Mrs. Matthews, which will incorporate all three aspects of teaching the alphabet. The activities detailed in this lesson can be adjusted to be appropriate for younger students, such as those in preschool. 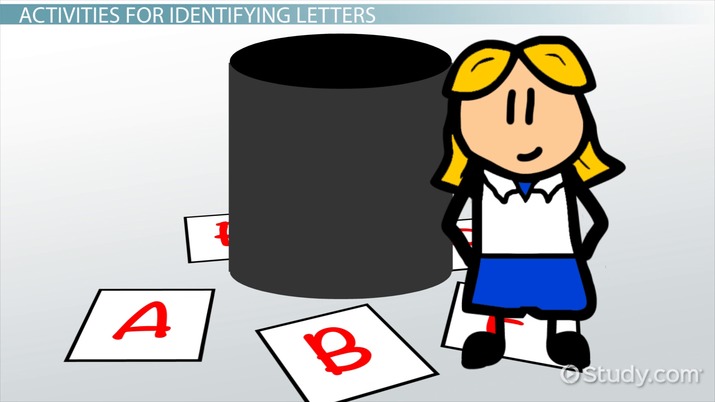 Try it now
Back
Coming up next: Classroom Rules and Procedures for Preschool

Letter of the Week

In Mrs. Matthews' classroom, learning to write letters comes down to repeated practice. Students spend a lot of time throughout the week practicing writing their new letter of the week. For example, Mrs. Matthews has small, individual whiteboards on which students can practice their letters, erase, and try again.

After Mrs. Matthews has introduced the new letter of the week to her students, many of her lessons are focused on helping students identify the letters in isolation, in words, and in sentences. It is important to give students ample experience seeing letters in different environments, as this skill will eventually lead them to learning to read.

Aside from rote activities, such as finding and circling letters in words or sentences, Mrs. Matthews likes to try and make letter identifying activities as fun as possible. One of the ways she does this is through letter basketball. In this game, pieces of paper with large letters written on them are placed around a trash can. Students take turns identifying a letter they are told, grabbing the paper, crumpling it up, and throwing it in the trash can, much like basketball.

Letter basketball is a movement-based game that will help students gain practice finding letters. Because it uses fun and movement as its core mechanics, students will stay engaged longer and be able to practice the skill more.

Mrs. Matthews has also modified many common board games to be letter-identification themed. In these board games, instead of moving to a certain color or a number of spaces, students have to move to a letter. These board games can be used with each new letter learned and also as a review of previously learned letters.

Finally, as a review for previously learned letters, Mrs. Matthews plays letter bingo with her students. This is a game that can be played after your students have learned about half of the alphabet. It is played similarly to regular bingo, except students need to identify the letters you say to place a piece on their board.

After students have learned the sound associated with a given letter, there are many fun activities you can do to help them practice. One such activity is a letter sound hunt. In this activity, students must go around the room and find things that begin with the same sound as the target letter for the week. So if Mrs. Matthews was teaching the sound for 'w,' students could find a whiteboard, a wipe, or a window.

Another activity Mrs. Matthews uses is drawing and erasing. In this activity, Mrs. Matthews draws a picture or several pictures on the board. Students then take turns erasing items from the picture that begin with the target letter sound. For example, if Mrs. Matthews drew a school building on the board and asked students to erase things that began with the 'd' sound, students might erase the front doors.

In addition to the few activities mentioned above, Mrs. Matthews also uses the activities for identifying letters when having her students practice letter sounds. For example, if students are playing a board game, they need to say the letter sound before they can move their piece to a corresponding space. By combining identification and sound activities, students build a stronger relationship between the written letter and the sound they are saying.

Teaching the alphabet in preschool and kindergarten is an incredibly important responsibility for teachers. In order to begin to learn to read and write, students need to learn how to form letters, identify letters, and associate letters with sounds. The activities from Mrs. Matthews' classroom can be adapted for your classroom and will help make alphabet learning fun for you and your students.

How to Write a Lesson Plan for Preschool

Facts About Caterpillars: Lesson for Kids