Robert Ferdinand has taught university-level mathematics, statistics and computer science from freshmen to senior level. Robert has a PhD in Applied Mathematics.

View bio
Want to learn more about the electrical power used by all those devices, like televisions and computers and cellphones? In this lesson, you will explore the differences between alternating current and direct current. Updated: 08/02/2021
Create an account

Electricity is the flow of electrons through a wire, but there are actually two different ways the electrons move within the wire. These are called currents. Much like an ocean current that moves in a definite direction, electricity has specific movements it makes in the wires. These currents are called alternating current (AC) and direct current (DC). 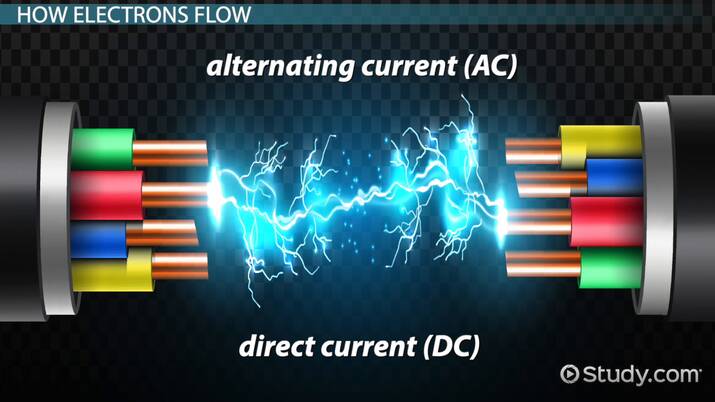 Coming up next: Arduino Project Ideas for Beginners

With DC current, electrons move in one direction, from (-) negative to (+) positive. It's a constant current, flowing continuously until either it's switched off or its power source runs out of or stops generating power.

Let's say we're looking at a circuit with a light bulb. As noted, direct current flows from negative to positive, and the on/off switch acts as a gate for this electron flow. When it's on, the circuit is complete, allowing the electrons to flow. After passing through the switch, electrons flow to the light bulb. The filament in the bulb lights up, taking the charge from the electrons, which are then drawn to the positive terminal on the battery to be charged once again. This process continues until the battery eventually loses its charge.

With AC current, electrons don't really flow, they simply vibrate back and forth from negative to positive and positive to negative. It isn't a continuous vibration either, like the constant flow in DC. The electrons vibrate in time or in sync with one another, and this timing is controlled by modifying the speed of the generator. We call this electrical timing hertz.

In the U.S., AC electricity is generated at 60 hertz. The electrons vibrate and bang into each other, transferring their charge from positive to negative and back again 60 times per second. This means that when a circuit running on AC has a light bulb, it doesn't have a steady flow of positively charged electrons running through it like it does on DC power, so the light is not constant either. It flickers on and off for every cycle of electron charge transfer at 60 complete cycles per second. However, this is too fast for the human eye to see, so it appears to be a constant light.

AC is produced by a generator, and its charge (negative or positive), flows both ways, as represented by the blue and red arrows in this image. The switch and the bulb operate the same as in the DC circuit.

The amount of force the electrons are moved with is called voltage. Many of our electrical items have different voltage needs. The voltage in AC power can be changed easily with a transformer, making that current ideal for providing electrical service to our homes.

However, DC power makes it easy to transport electricity around with us in the form of batteries, like the ones we use in our cell phones, laptops, tablets, flashlights, and even our vehicles, because they don't need a very high voltage.

The flow of electrical power has two different ways of moving, or currents. Direct current (DC) is a constant flow from negative to positive, while alternating current (AC) flows in a wave pattern that vibrates at a specific hertz, meaning that it cycles from negative to positive a certain number of times per second. Voltage is the amount of force used to move the electric current along, and can be regulated with transformers in alternating current, but not direct current.

The following activity will test your knowledge of the main points in the lesson about alternating and direct current. Fill in the blanks in the following statements (no peeking at the answers until you're done).

(a) With DC current, electrons move in one direction, from (blank) to (blank).

(c) When a circuit running on AC has a light bulb, it doesn't have a steady flow of positively charged (blank) running through it like it does on (blank) power.

(e) The amount of force the electrons are moved with is called (blank).

(f) The voltage in AC power can be changed easily with a (blank), making that current ideal for providing electrical service to our homes.

(g) DC power makes it easy to transport electricity using batteries, like the ones we use in our cell phones, laptops, tablets, flashlights, and vehicles, because they don't need a very high (blank).

Answers (to check your work)

What is a Diode? - Definition & Types

How to Use Electricity Safely

How Does an Electric Generator Work? - Lesson for Kids

What is Electricity? - Lesson for Kids

History of Electricity Lesson for Kids