The first step to four-part writing is to know the four parts. In this lesson, we'll get to know the alto and see what this voice contributes to the harmony and stability of the composition. Updated: 05/11/2020
Create an account

Who doesn't love the sound of four-part choral music? The harmonies, the emotions, the rich texture. . . there's a reason this form of music writing has been so popular for so long. How do we create that texture and quality? Well, we have to learn to use our inner voices.

No, we don't mean the voices in your head (although they can be useful, too). Four-part music is divided into, unsurprisingly, four parts: soprano, alto, tenor, and bass. While the soprano and bass, which we call the outside voices, define a lot of the melody that you hear, the glue that holds it all together comes from the tenor and the alto, the inner voices. Just as with your subconscious, you may not always hear the inner voices as clearly, but they're the parts that help you keep it together. 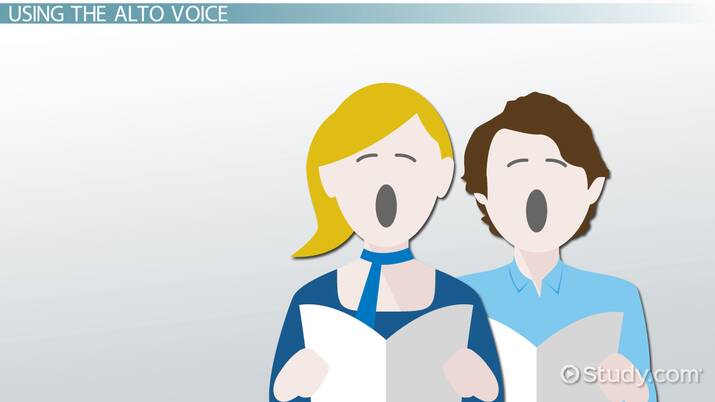 Coming up next: Tenor: Definition & Range

Today, our focus is on the higher of the inner voices, the part known as the alto (from the Italian word for ''high''). The alto is the second-highest of the four voices, sitting above the tenor but below the soprano. While the range can vary a bit by singer, the typical range for the alto voice is the F or G below middle C, to second D above middle C. Incidentally, musical instruments that naturally fall in this range can sometimes also be called altos, as in the alto saxophone.

In choral music, the alto range is traditionally the lowest in which you can expect to find female voices and is rarely occupied by male singers. Historically, young boys were often used to fill this role, as well as the occasional adult male who was proficient at falsetto.

Alto voices are high and clear, but four-part writing isn't about the single quality of any specific voice. It's about using all four of these voices together. So how do we use the alto in four-part writing?

In general, the upper voices (tenor, alto, and soprano) ought to be grouped together and react strongly to each other's movements. It's important to keep a fair amount of distance between all the upper voices and the bass, which kind of gets to do its own thing.

Among the upper voices, the alto plays the important role of filling in the space between the tenor and soprano voices. Like most middle children, the alto voice is often forgotten but still integral to keeping the family unit together. If you remove the alto from the harmony, the distance between the tenor and soprano can become very obvious. That makes the alto pretty important. Its role isn't always to be clearly heard but to provide context and support for the other lines. It completes the harmony, even without us realizing it.

This means we always have to be very conscientious of where that alto line is. In general, the alto and soprano lines should always be within an octave of each other and (even more preferably) should stay within a sixth of each other. If the soprano line starts on high E, your alto line should be no lower than low E and preferably above F.

On the other hand, the alto should stay about the same distance above the tenor line. You don't want your tenor to be more than a seventh below the alto and again preferably within a sixth. By keeping the alto within this range, you bridge the distance between the tenor and soprano voices and ensure that they remain harmoniously connected.

As a final point, there's something we need to acknowledge about writing the alto voice (not in terms of theory but actual physical transcription). In many scores, the alto and soprano voices will be written in the same space. This is especially true when written for piano, as soprano and alto voices typically occupy the treble clef, while tenor and bass voices are typically written in the bass clef. So, how do you tell the alto and soprano lines apart? The alto's notes are traditionally written with stems facing down, while the soprano's point up. Simple as that.

Let's review. In four-part music, the alto is the second-highest voice, sitting above the tenor but below the soprano. Its range is typically from the F or G below middle C, to second D above middle C. The alto and tenor are known as inner voices in four-part writing, and while they're not always the most audible, they play a major role in holding the harmonies together. This is especially true of the alto voice, which controls the relationship between the three upper voices and prevents there from being too much unused space between the tenor and soprano. Without the alto, it would be much more difficult for four-part music to achieve a sense of stability and completion. Sometimes it pays to listen to those inner voices.

What is a Chorus in a Song? - Definition & Examples

Sharps and Flats: Reading and Identifying Sharp and Flat Notes in Music

What are Triads in Music? - Definition & Examples