Copyright
Lesson Transcript
Instructor: Tracy Musacchio
The Amarna Period was a time of great change during the New Kingdom of Egypt. Learn the defining characteristics of this era, including its art, its religion, and the restoration of the Amarna Period. Updated: 09/13/2021
Create an account

The New Kingdom of Egypt

In the middle of the Eighteenth Dynasty, which was in the mid-14th century BCE during Egypt's New Kingdom, an Egyptian pharaoh by the name of Amenhotep IV took the throne. At the start, his reign seemed just like that of any other pharaoh. But within five years he had changed his name to Akhenaten and made significant (and controversial) changes in the region.

Akhenaten made changes to Egyptian religion by placing a new god, the Aten, at the top of the pantheon. He moved the capital to a new city, Akhetaten (near the modern city of Amarna). He also instituted new artistic styles that deviated from the canonic style that had dominated in Egypt with few changes for the previous two millennia. 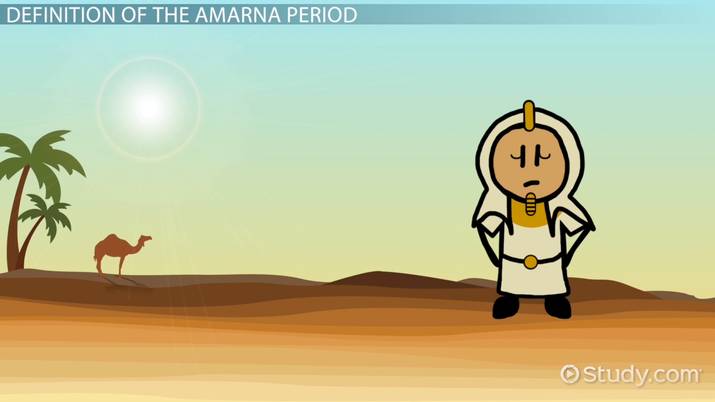 Definition of the Amarna Period

The Amarna Period is named after the modern town of Amarna, on the east bank of the Nile in Middle Egypt. Currently, Amarna is an archaeological site containing the remains of the city of Akhetaten, or 'horizon of the Aten.' This was the capital city of the pharaoh Akhenaten. It was a new city, built on fresh ground where no other ancient cities had stood previously. Akhenaten chose this site intentionally to represent a fresh start, away from older cities and existing temples to other gods.

Before he became Akhenaten, however, this revolutionary pharaoh was born Amenhotep IV, son of Amenhotep III, who ruled over Egypt from the capital city of Thebes. The main god of Thebes was Amun, and several huge temples at Thebes testify to Amun's strength and importance. As Amun's power grew, so too did the power of the priesthood of Amun grow in direct proportion. By the time Amunhotep IV took the throne, the power of the priests of Amun likely rivaled that of the pharaoh.

Egyptian society was polytheistic, and Egyptians were free to worship any of the dozens of gods in the Egyptian pantheon. Amunhotep IV preferred one particular god to the exclusion of the others - an obscure god named the Aten, who was portrayed not in the anthropomorphic style common to Egyptian gods but instead as a sun-disc with hands reaching down off its multiple rays. Amunhotep IV's worship of this god was so devoted that in the fifth year of his reign, he changed his name to Akhenaten ('spirit of the Aten') as a testament to his faith.

Art of the Amarna Period

After his name change, Akhenaten introduced other radical changes, most notably to the art. Artistic styles in Egypt had exhibited few changes since the canon was introduced in the Old Kingdom, but under Akhenaten, the style was modified notably.

In the new style, hands and arms are narrow and elongated. Figures - both men and women - have enlarged hips and stomachs, elongated heads, and noticeable breasts. While figures still face sideways rather than looking directly out toward the viewer, the scenes portrayed include uncharacteristically intimate family scenes between Akhenaten, his wife Nefertiti, and their daughters. One famous depiction from the workshop of the sculptor Thutmose is executed with precision and skill, showing Nefertiti looking incredibly regal.

Early scholars stipulated that Akhenaten may have had a genetic disorder that caused physical abnormalities (such as Froehlich's Syndrome, Klinefelter Syndrome, or Marfan's Syndrome); the artistic representations then may have been accurately depicting his physical appearance. Other scholars have said the changes to the art were part of his religious reforms and were an attempt to show that men and women were both part of the same gender spectrum.

Religion of the Amarna Period

There is also a debate as to why Akhenaten made the religious changes he did. Was he a true believer? Or, was he attempting to subvert the power of the cult of Amun? Either scenario is a possibility.

Many have referred to the Amarna Period and Akhenaten's worship of the Aten as the first incidence of monotheism. Akhenaten venerated the Aten to the exclusion of all other gods. However, he didn't completely prohibit the worship of all other gods; most of his attention was just focused on the cult of Amun. There are parallels between his religion and the later monotheistic religions of the Middle East. In particular, one text inscribed on a tomb at Amarna is strikingly similar to Psalm 104.

Restoration of the Amarna Period

After Akhenaten died, there's confusion among historians and scholars over what happened next. Many have argued that his wife, Nefertiti, took the throne and reigned briefly before Tutankhamun (born as Tutankhaten) took the throne and died young. After King Tut's reign, he was succeeded by King Ay, one of his advisors.

What we do know about what came after Akhenaten: the Egyptians saw the Amarna Period as an aberration - later records deleted Akhenaten's name from king lists and other royal propaganda. Once Tutankhamun took the throne, a period of restoration began. The capital was once more moved to Thebes and the traditional religion - including worship of Amun - was restored.

Now that we're done learning about the Amarna Period and its figures and characteristics, you should be able to do the following:

The Egyptian Book of the Dead: Summary, Spell 125 & Quotes

The Unification of Upper & Lower Egypt