The American Anti-Slavery Society had a role in abolishing slavery through political engagement and lobbying, becoming a powerful activist association for black rights. Learn more about slavery in early America, anti-slavery societies, policies and politics. Updated: 12/08/2021
Create an account

Even during the Revolutionary Era, slavery was a divisive issue in America. Our Founding Fathers largely side-stepped the issue, leaving it to future generations to negotiate. Debate over slavery consumed the young American republic throughout the early 19th century, and by the 1820s, the question of slavery was central to American politics. The North tended to embrace a more radical stance on slavery. In the North, abolitionism was far more common than in the South. In the South, slavery was accepted as an economic necessity.

Slave rebellions were common throughout the South during the first half of the 19th century, and these rebellions sparked fear among white Southerners. In Virginia, the Southhampton Insurrection, or slave rebellion of 1831, led by Nat Turner, was particularly deadly and had profound social and political repercussions. Historians believe rebel slaves killed some 60 whites, while up to 200 African-Americans died at the hands of white mobs and militias. 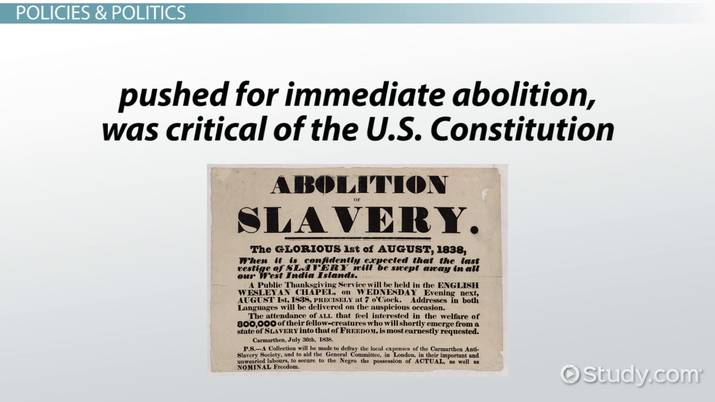 Coming up next: The Religious Roots of the Abolitionist Movement

Recognizing the social evil of slavery and its effects, numerous abolitionist organizations sprang up during the first half of the 19th century. These organizations worked to abolish slavery through political means. Local and state chapters engaged in lobbying and became a powerful force in the anti-slavery movement. Among the most prominent was the American Anti-Slavery Society (AASS), founded in 1833 by William Lloyd Garrison and Arthur Tappan. The society was based in New York City and was in existence until 1870.

The AASS argued against slavery both on religious and natural grounds. This meant that society understood slavery to be an evil both from a religious and non-religous, or natural, perspective as it was a violation of human rights.

Garrison's approach was pretty radical - even for his co-founder Arthur Tappan. In 1839, the American Anti-Slavery Society split. Tappan and others broke away from the organization and formed the American and Foreign Anti-Slavery Society. Garrison pushed for immediate abolition, was critical of the U.S. Constitution and the electoral process, and aligned himself with the women's suffrage movement. By contrast, Tappan and his new organization rejected an alliance with the women's suffrage movement and were willing to work toward a gradual emancipation through the electoral process.

Garrison's views were too radical for many others. In 1840, another group broke away from the AASS and formed the Liberty Party, a political party that held abolitionist views but was willing to work within the electoral system to achieve its goals. By the 1840s and 1850s, abolitionism had entered mainstream politics, and numerous other anti-slavery political parties began springing up, such as the Free Soil Party and the Republican Party. Following the end of the Civil War and the ratification of the Reconstruction Amendments to the U.S. Constitution, the American Anti-Slavery Society was dissolved in 1870.

Slavery was a divisive issue from the very birth of the American republic. By the 1820s, the issue had become front and center of American politics. Events, such as the Southhampton Insurrection in 1831 that left some 60 white Southerners and 200 African-Americans dead, highlighted the controversy over slavery. To combat slavery, abolitionist organizations began springing up.

William Lloyd Garrison Biography & Facts | What was The Liberator?