In this lesson, you'll explore the history of American imperialism and discover how imperialism can appear in many different ways. Afterwards, you can test your understanding with a brief quiz.
Create an account

Imperialism is technically defined as the expansion of influence of one nation over other nations. In essence, the more powerful nation, like the house on the right, takes over another country, usually as part of their empire. There have been many empires throughout history, and the United States is one of them. Many people don't believe that the United States could be an empire, especially due to our heritage as the colony of another empire. But ask yourself, how did we go from 13 colonies to 50 states? And what in the world are we doing in Guam? 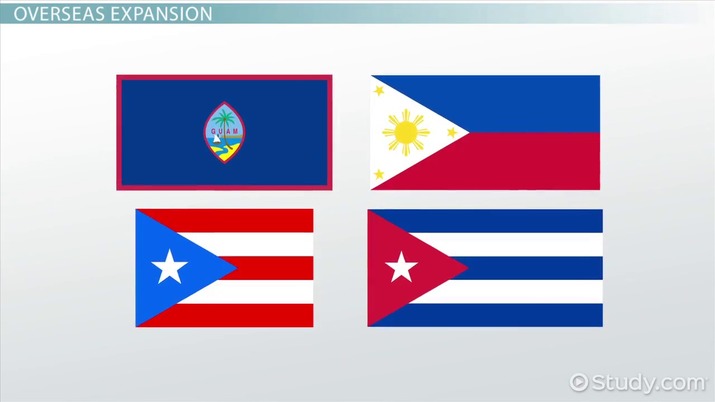 Coming up next: The Spanish-American War: Causes, Goals & Results

America's first experience with imperialism came very early on, as the United States began moving west. As more American citizens moved into the lands of the west, these lands were established as United States territories. Over the 19th century, the United States increased dramatically in size, incorporating more and more territories into the nation. For a while, American politicians treated the residing Native American groups of these regions like independent nations, using treaties to justify the transfer of land into the United States.

One of the first major attempts by the United States to gain territory from another formal country was during the Mexican-American War from 1846-1848. Americans had been moving into the Mexican territory of Texas for decades, and around 1836, they rebelled against Mexico and turned Texas into an independent country. In 1845, the United States annexed Texas, meaning that they incorporated it into the nation, despite the fact that Mexico had still not recognized the legitimacy of Texas' independence.

To Mexico, the annexation of Texas was nothing short of stealing land. The result was a war between the United States and Mexico, which the United States won. In the peace treaty between the US and Mexico, called the Treaty of Guadalupe Hidalgo, Mexico not only lost Texas to the United States but an additional 520,000 square miles of land as well. Most of what is now the U.S. Southwest - including parts of California, Arizona, Nevada, Utah, New Mexico, Colorado, and Wyoming - was the northern part of Mexico until 1848.

After the Treaty of Guadalupe Hidalgo, the United States essentially had its current shape, but the United States controls more territory than just the states. In 1895, Cuban rebels began their fight for independence from Spain. Spain sent troops to stop the rebellion, which violated America's Monroe Doctrine, an 1823 policy that established European nations could not interfere in the Western Hemisphere. This meant that as of 1898, now we were at war with Spain, too.

The Spanish-American War lasted 10 months but was fought across the Spanish Empire, from Cuba to the Philippines. In the end, Spain lost. But what happened at the peace treaties? The Spanish colonies did not gain independence; instead, they were given to the United States. Now, the United States controlled the colonies of the Philippines, Puerto Rico, and Guam, and had temporary possession of Cuba. The people of the Philippines went into rebellion but were subdued by American forces and remained an American colony until 1946.

Other Forms of Imperialism

There are more examples of direct American imperialism than we have time to discuss. The wars with Spain and Mexico are just two examples, but check out how we got Hawaii some time. Although the examples we have discussed demonstrate the most common form of imperialism, there are other forms, such as controlling the government of foreign nations. An example of this comes from Chile. In 1970, the socialist Salvador Allende was elected president of Chile. At this time, the United States was in the middle of the Cold War, a fight against the Soviet Union for the dominance of communism versus capitalism in the world. America could not allow Chile to become socialist, so the Central Intelligence Agency sponsored a Chilean rebellion to overthrow Allende. The CIA funded the leaders that were most friendly to the United States, helped them defeat Allende (who was killed in the coup), and rebuilt Chile as a capitalist, pro-America nation.

That's still a pretty direct form of imperialism, so let's look at some other styles. Economic imperialism is when a nation uses powerful business or economic control to influence other nations. The United Fruit Company is a good example. This American corporation became so rich from growing and selling South American fruits, like bananas, that they were able to control politics in nations like Costa Rica, Honduras, and Guatemala.

Then, there is also cultural imperialism, in which ideas or products of one nation are spread into other nations in a way that favors the larger power. Many critics accuse the United States of cultural imperialism through the sale of products like Coca-Cola or McDonald's around the world. Think of it this way. There's a kid on the playground who wants to use the swings, but other kids are using them. He starts wearing sunglasses and is able to convince everyone else that sunglasses are cool, so they start wearing them too. Now, whenever he wants the swings, the other kids let him use them first because they think he is the coolest kid. That's the fear with cultural imperialism - that countries like the United States will be able to influence other nations because the people there have become so accepting of our culture and products. In many ways, it all comes down to how far we are willing to let that influence grow.

Imperialism is the expansion of one nation's influence over other nations. There are many forms of imperialism, and the United States has been involved in most of them. Since the nation started expanding west, new territories were annexed, or added into the country. After the United States annexed Texas, Mexico cried foul and went to war. At the end of the Mexican-American War, America got what is now the southwest from Mexico in the Treaty of Guadalupe Hidalgo. America also ended up at war with Spain and got the Philippines, Guam, and Puerto Rico.

In other styles of imperialism, the American CIA helped rebels overthrow President Allende of Chile and placed a more American-friendly leader in charge. American companies like United Fruit demonstrated economic imperialism once they became so powerful they could influence other governments. Now, people worry that America is becoming so influential through products like movies and companies like Coca-Cola that it could result in a form of cultural imperialism. There are many styles of imperialism, but at the end of the day, the house on the right still gets to use the house on the left as a tool shed.

Impact of the Great Depression on Latin America

Mesoamerican Civilizations: The Olmecs to Cortes

What is Moral Diplomacy? - Definition & Examples

Impact of the Industrial Revolution on Women & Children

Old and New Immigrants in the US: Definition & Overview