The American Revolution lasted for many years and there were many battles between American colonists and the British. Witness a handful of important battles, learn where they were fought, and who was the victor in each battle. Updated: 12/27/2021
Create an account

Fighting with a Giant

Have you heard the story of David and Goliath? It is the tale of a young boy who fought and defeated a giant. Well, the United States was like a young boy taking on the giant that was the British Empire during the American Revolution, which was the war fought by the American colonists to secure their independence from Great Britain. Though the British had many advantages in this war, it was the ability of the Americans to use their knowledge of the land that helped them succeed.

It is important to note that at the time of the American Revolution, Great Britain was indeed a giant. It was one of the most powerful nations in the world. They had the greatest navy on the planet and a well-trained army. The successful British economy kept their soldiers equipped with the best weapons and supplies in existence at that time. Their military officers were experts in organizing and leading men in combat. In terms of its giant status, Britain was a true military giant. 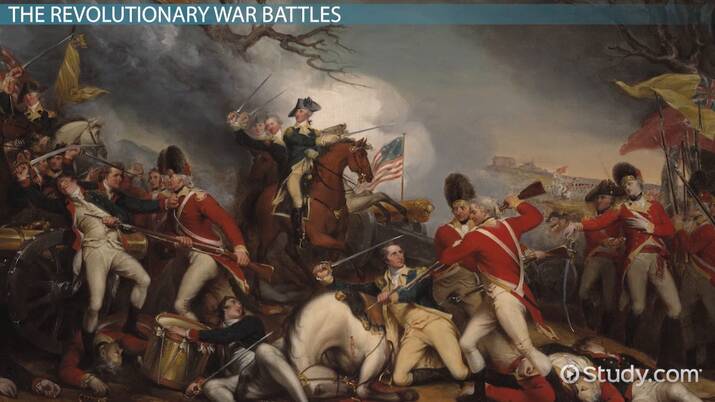 Coming up next: Causes of the American Revolution: Lesson for Kids

The newly formed United States didn't have any of these advantages. Its army was mostly made up of part-time militia who had only limited training. American military forces were often short on weapons and supplies, and the young nation had no real navy to speak of. However, the U.S. did have one very important advantage: the majority of the fighting took place on American soil.

In most cases, when the U.S. tried to go ''head-to-head'' with the British, things did not go well for the Americans.

There was the Battle of Brooklyn Heights (August 1776). General George Washington wanted to protect the largest city in the colonies: New York. A British force attacked the city's defenders from three different directions at once, causing the poorly trained Americans to retreat in confusion. The British then took control of New York City.

There was also the Battle of Brandywine (September 1777). The British wished to take the city of Philadelphia, which was symbolically very important. British forces were able to move much more quickly than American officers believed possible, and they caught the continental forces unprepared. Under heavy fire, the American soldiers retreated, and Philadelphia was captured.

The Americans had their greatest successes when they were able to use their expert knowledge of the territory to take the British by surprise.

Then there was the Battle of Saratoga (October 1777). When a large British force moved south from Canada in an attempt to cut through New England, Americans used their knowledge of the heights surrounding the town of Saratoga, New York. When the British marched into the town, the Americans swarmed to the hills outside of the town and opened fire. The British tried to break out, but the American defenses of the hills were too strong. The British were forced to surrender.

Then there was the Battle of Cowpens (January 1781). The British hoped to gain more loyalist support in the Carolinas, so they marched their army through the South. Americans under Daniel Morgan used hills and ravines to trick the British into underestimating their numbers. Thinking they had the advantage, the British charged but suffered heavy casualties. The British were eventually forced to flee.

In the closing days of the Revolutionary War, the Americans were once again able to use their knowledge of the terrain to trap a large British force in the city of Yorktown, Virginia. The surrender of the British at Yorktown signaled an end to the war.

All right, let's briefly review what we've learned in this lesson about the battles of the American Revolution, also known as the Revolutionary War, which was the war fought by the American colonists to secure their independence from Great Britain.

The main important point of this lesson is that the United States used its ''home-field'' advantage to defeat the British and win its independence. While Britain appeared to have all of the advantages during the Revolutionary War, it was the U.S. that emerged victorious.

People of the American Revolution: Lesson for Kids

Roles of Women in the Revolutionary War: Lesson for Kids

Famous Women in the Revolutionary War: Lesson for Kids

The U.S. & France in the Revolutionary War: Lesson for Kids

British Generals of the Revolutionary War Lesson for Kids