Audrey is a doctoral student in English at University of Maryland.

This lesson provides a summary and analysis of Chimamanda Ngozi Adichie's 2013 novel, Americanah. The novel explores the life of a young Nigerian woman who moves to America and experiences racism for the first time.
Create an account

Overview of the Novel

Americanah was written by Chimamanda Ngozi Adichie in 2013. Americanah relates the story of Ifemelu, a Nigerian native living in New Jersey. The focal point of the narrative is Ifemelu's hair-braiding. She rides a train to Trenton to get her hair done because the town of Princeton is predominantly Caucasian. At the salon, she reminisces about her past in Nigeria. The narrative alternates between Ifemelu's story and her blog posts concerning racial tensions in her new country. 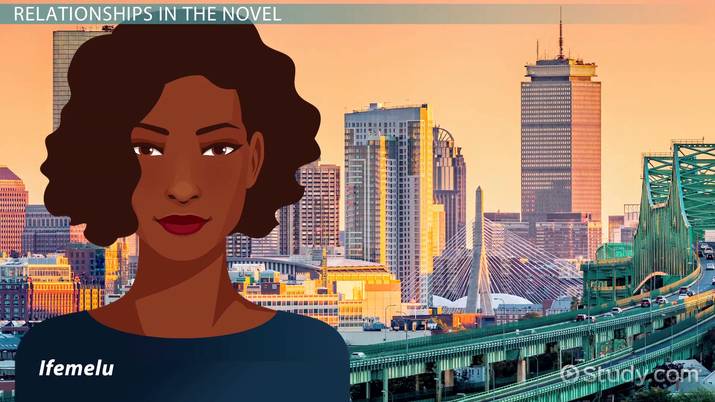 Coming up next: The Thing Around Your Neck: Summary & Analysis

Ifemelu is a native of Lagos, Nigeria. She meets a young man named Obinze at school. The two date while Ifemelu is living with her Aunty Uju, the mistress of an affluent married man known as The General. Aunty Uju gives birth to this man's baby, whom she names Dike. When her lover dies, Uju moves to America with her son.

Ifemelu and Obinize become sexually active, and she fears she might be pregnant, though she never is. Suddenly, the university is closed after a strike. Ifemelu decides to follow her aunt to America. She earns a scholarship to attend a college in Philadelphia and spends the summer with her aunt and cousin in Brooklyn.

Ginika, another Nigerian native living in the neighborhood, helps Ifemelu adjust to her new life. This friend explains to Ifemelu about racial politics in the United States. Ifemelu adopts an American accent in hopes of making friends and obtaining employment. Eventually, she gets a job helping a tennis instructor 'relax.'

Adichie also uses this word to refer to the process of straightening black hair. In Nigeria, Ifemelu wore her hair in braids. In America, she learns she is supposed to straighten or 'relax' it if she wants to be taken seriously as a scholar and professional. The coach touches her inappropriately and gives her some money. She is so traumatized by this event that she stops communicating with Obinze.

Relationships in the Novel

Ginika gets Ifemelu a babysitting job working for a rich mother named Kimberly. Meanwhile, Ifemulu's aunt has moved to Massachusetts with her new husband. Ifemelu visits her aunt in Massachusetts and begins to date Kimberly's cousin, Curt, a wealthy white man.

Obinze, who has been very devastated by Ifemelu's neglect, moves to England. Here, his visa expires before he can find employment. When he is identified as an illegal immigrant, he marries a woman named Cleotilde in order to qualify for a green card. On the day of his wedding, he is arrested and deported back to his home country.

Back in America, Ifemelu begins to question her relationship with Curt. She struggles in public because their interracial relationship is scrutinized. Curt eventually breaks up with her after learning of her unfaithfulness. She becomes depressed, so her parents visit. She begins blogging and finds this activity to be very fulfilling. Soon, she becomes well-known for her blog, and she is invited to speak on race at public events.

One week prior to her return trip, Ifemelu visits the salon. As she exits the salon, she receives a call from her aunt informing her that Dike has attempted suicide. Devastated, Ifemelu rushes to his bedside. Soon after this, she returns to Lagos. An old friend helps her get settled into her old life, though she teasingly calls Ifemelu an 'Americanah.'

Ifemelu begins blogging about her new life in Lagos. Finally, she works up the courage to call Obinze, who is now married and a father. The two rekindle their romance. The romance is short-lived, however, since Obinze is married. He tries to divorce his wife, Kosi, but she will not grant him a divorce. After nearly a year, he appears at Ifemelu's doorstep, claiming that he will leave his wife with or without a divorce. Ifemulu asks him inside, and readers are left to wonder what will happen.

Themes of the Novel

Adichie explores racial tensions in America, England, and Nigeria through the trope of visibility. In Nigeria, Ifemelu is relatively color-blind, as she doesn't notice that she is black. This does not mean that no racism exists in Nigeria, but only that it is not as pronounced as in England and the United States. However, when she moves to America, she is awakened to the cruel reality of racial tensions. She begins to see herself as black for the first time and notices others' racial profiles.

Another theme in the novel is authorship. Adichie explores the ways in which minorities can take control of the narratives surrounding their culture. Ifemelu's blog posts offer one example. A related theme is disconnection from one's roots. Ifemelu feels severed from her homeland, and her blog helps her reconnect to her heritage, as she uses it to reminisce about life in Nigeria. Ifemelu feels affection for Barack Obama because she perceives that he, too, has been disconnected from his past.

Chimamanda Ngozi Adichie is the author of the novel Americana, which is a story about Ifemelu, a Nigerian woman struggling to find her way in the world. As the protagonist matures into adulthood, she learns how to cope with racial discrimination and romantic disappointment. Some of the themes explored in the novel are visibility, authorship, and disconnection.

The Glass Menagerie: Summary and Analysis

Binyavanga Wainaina's How to Write About Africa: Summary & Analysis