Meaning 'friend of the court,' amicus curiae briefs are filed for various reasons to give the public a voice regarding certain legal issues. Explore the definition of these legal documents and understand their purpose with the aid of real-life examples. Updated: 10/15/2021
Create an account

Let's say that you believe strongly that marijuana should be legal in the United States for medicinal purposes only. You are aware that there is a case going to the Supreme Court, and you want to try and influence the Court's decision. Even though you are not involved directly in the action, you want to file a brief in support of your position. This type of brief is an amicus curiae brief. 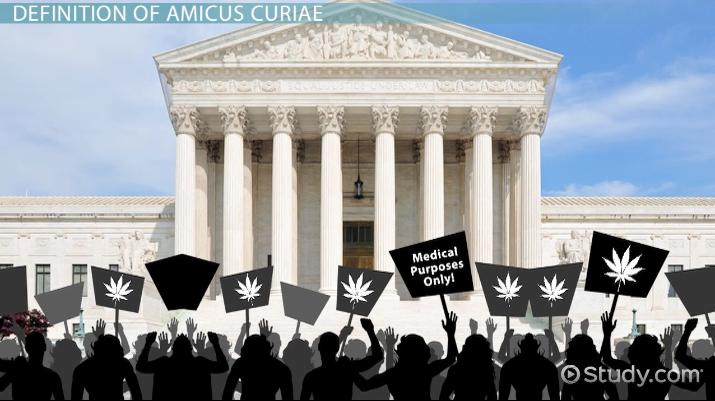 Let's also imagine a scenario where you are in support of gun control laws. You lead a local community group that believes in this cause and want to support a gun control case that is currently before the Supreme Court. As a result, you gather your arguments and have an attorney draft an amicus curiae brief in support of the cause. You specifically insert arguments that other parties have not yet made, in the hopes that the Court will review and acknowledge your viewpoint and, hopefully, decide the case in your favor.

An amicus curiae brief, which means 'friend of the court' in Latin, is a legal document submitted by a person or group that is not involved directly in the particular action, that lets them explain how a case should be ruled a certain way. In essence, it allows the general public to have a voice when it comes to significant legal issues. It's always to support a particular issue; it provides additional arguments to the court regarding the issue that they might not have heard already, and to demonstrate a potential impact - social, political, legal, economic, etc. - the decision could have.

Nominating a Presidential Candidate | The Process & Its Strengths & Weaknesses