Economic models are condensed examples of economic properties that are used to analyze and predict economic variables. Explore models of microeconomics, and note where these models fail in predicting all influential variables. Updated: 11/03/2021
Create an account

When you were a little kid, chances are you had models of some sort. Granted, you may not have called them models, but from doll houses to action figures, from pony farms and building blocks, a lot of what you considered play was really using a shrunken and simplified version of the world as you saw it. And to help you play, you used toys; often themselves easily manipulated versions of a much larger actual entity. In short, you've been using models all your life.

Economic models also are shrunken down versions of the world. In short, an economic model is simply a way of analyzing data, both theoretical and observed. It allows economists to make generalizations and predictions about how parts of the economy, or indeed whole economies, will respond to various changes.

In this lesson, we're going to focus mainly on models used by microeconomists, but there are models for literally every type of economist. As such, rather than focusing on massive, economy-wide models that macroeconomists use, such as Keynesian or Classical models, we get to use much smaller models. And the best part is that you are probably already pretty familiar with some of them. 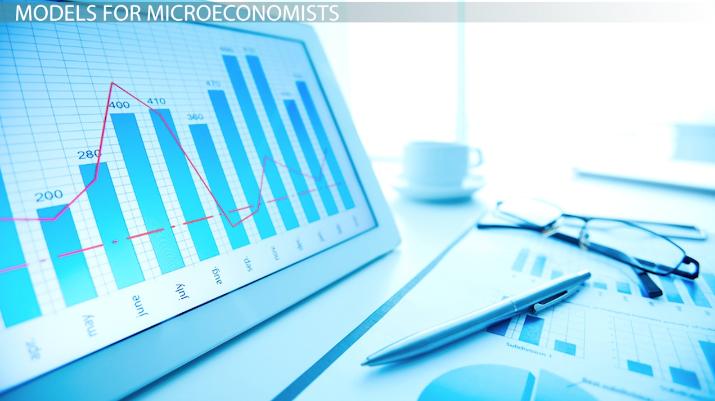 Coming up next: Understanding the Demand Curve in Microeconomics

Remember, a model just shows how different changes to an economy should work - in other words, they show a direction of movement. This means that charts and graphs are great visualizations for models. In fact, the most important chart for an economist, and certainly a microeconomist, is a supply and demand graph. Now if you're new to the study of economics, you probably want to say 'gee, it just seems to be common sense that supply and demand have an inverse relationship. I don't need these models.' Well, you can't have that attitude if you want to excel in the field. You must use these models!

Sure, it's easy when you're only accounting for one variable, say an increase in demand. But what about an increase in taxes with a price ceiling? By the way, a price ceiling is just a control that prevents companies from raising prices more than a certain amount. In that case, you might want a model to visualize this all. That's what the supply and demand model lets us do.

But that's not to say that supply and demand is the only model useful for microeconomists. Remember, microeconomics is especially interested in helping companies make better decisions. As a result, something like the production possibilities curve is a great model to help firms figure out how to allocate resources. It is definitely a generalization but can help managers determine the best way to use resources. Remember, scarcity is a problem across economics, and for individuals and firms to prosper, they have to use their scarce resources effectively.

It's just a fact of life. Models fail. The wonderful thing about economics is that it's okay for models to fail. If you ever heard the expression 'almost only counts in horseshoes and hand grenades,' then you could add economics to that list. It's possible to make incredibly detailed predictions based on the vast amount of data that economists have access to. In fact, it's even easier for microeconomists to do this than it is for macroeconomists - the numbers for a particular institution are much more precise than for an entire economy. However, there are various other inputs that economists simply can't control. Yes, this includes the sort of excuses you'd expect, like the weather, but also the actions of others.

That said, none of that really matters. The important thing for economic models is to give a general idea of the direction of movement. For those doing microeconomic analysis for a company, this is especially true. If economic models indicate that there is going to be growth in the next few months, or even years, then it could be time to consider expanding the company's operations. Likewise, if the opposite is true, it could be time to think of ways to cut costs so that the shock isn't too damaging.

In this lesson, we learned about the use of economic models. Economic models help economists to predict the actions of the economy. While macroeconomists have models that enable them to make predictions across whole economies, the models used by microeconomists are no less important. Principle among these models is the supply and demand graph, as well as the production possibilities curve. Finally, we saw how even when models are inaccurate, they can help people make better decisions by providing some direction of movement.