Amy has taught college and law school writing courses. She holds a master's degree in English and a law degree.

It can sometimes be tough to figure out what a poem means. This lesson provides some tools to help you analyze poetry and develop your interpretations. Updated: 09/30/2019
Create an account

Do you find poetry intimidating? Have you ever found yourself studying a poem and not knowing how to start figuring out what it means? This lesson will present a few basic techniques commonly used in poetry. Keep your eye out for them because they can provide you with ways to kick off your analysis. 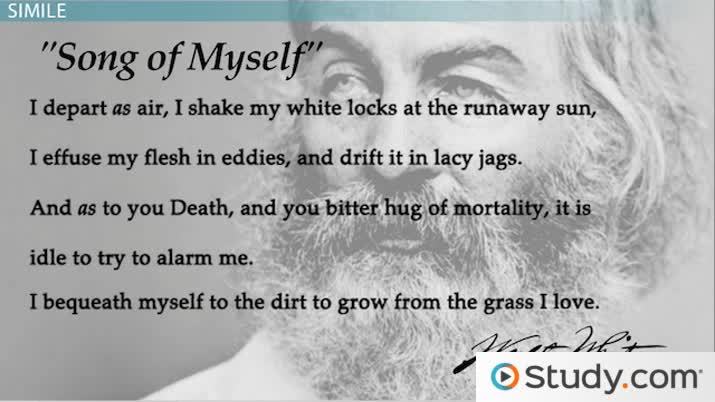 Coming up next: Identifying Forms in American Poetry

You may recall learning about similes in regular speech in grade school; similes in poetry really aren't that different. A simile is a comparison between two things using the words 'like' or 'as.' The use of one of those two words - like or as - helps the speaker vividly illustrate the comparison he or she is making. Here's an example of a simile, from the well-known poem 'Song of Myself' by Walt Whitman:

I depart as air, I shake my white locks at the runaway sun,
I effuse my flesh in eddies, and drift it in lacy jags.

Note that the narrator here makes use of a simile when he says that he departs 'as air.' He's discussing death here, having told us in an earlier section:

And as to you Death, and you bitter hug of mortality, it is
idle to try to alarm me.

Whitman writes of death as a process of becoming one with the Earth, saying:

I bequeath myself to the dirt to grow from the grass I love.

The speaker is expressing to the reader that to die, and to 'depart as air' is not violent or tragic, but peaceful, and his spirit continues within the elements. Through the use of simile, Whitman can more vividly express this particular vision of death and spirituality.

Metaphors are a lot like similes, but with one major difference. Rather than using the terms 'like' or 'as' to compare two things, a metaphor is a direct statement that one thing is another thing. One easy-to-remember example of an American poem featuring metaphors is the poem titled 'Metaphors,' by Sylvia Plath. Here are the opening lines of this nine-line poem:

I'm a riddle in nine syllables,
An elephant, a ponderous house,
A melon strolling on two tendrils.

Written while Plath was pregnant, 'Metaphors' contains a number of images that evoke pregnancy, including that of an elephant and the melon on two tendrils. A later line states:

This loaf's big with its yeasty rising.

What's key here is noting that Plath doesn't say, 'I'm like a riddle in nine syllables,' or 'I'm as big as a melon strolling on two tendrils' (if she had, she presumably would have named her poem 'Similes' rather than 'Metaphors'). Instead, she states that she is each of these things; and that's what a metaphor does - it makes a comparison by saying that something is something else.

The technique of personification does just what the name suggests. When a poet employs personification, he or she is describing a thing or an animal, or an aspect of it, as though it were a person. This doesn't necessarily mean that a poet would look around at nature and declare, 'That rock has a beautiful smile' (though a poet certainly could do this, and that would certainly be personification). It's usually more subtle than this. Think along the lines of someone saying that 'the warm air embraced the young children' (we usually think of people, rather than things, embracing). A classic example of personification in poetry is Emily Dickinson's poem with the following opening lines:

Because I could not stop for death--
He kindly stopped for me.

In this poem, Dickinson is quite literally personifying death, in that she's making it a character in the story she tells here, noting that:

The Carriage held but just Ourselves--
And Immortality.

In the poem, Death swoops into the speaker's life in his carriage and carries her away 'toward Eternity.' Dickinson makes an interesting point about death through the personification technique. Death is not some unimaginable horror here, but rather a figure who is like a person, and one who is not so fearsome. She notes his 'kindly' action and 'His Civility,' as well as the fact that 'We slowly drove--He knew no haste,' making it hard to be too terrified of the final ride that she's taking and that we all take.

In poetry and all of literature, symbolism is the technique by which someone or something stands for something else. Symbolism can be really basic and obvious. For example, we might write a story about a very unhappy girl whose sadness is symbolized by dark storm clouds that hang over her. Some symbolism can be trickier to detect, and some might be open to various interpretations. Here's an example of symbolism in an American poem. You've likely read at least part of the poem 'The Road Not Taken' by Robert Frost. The poem begins as follows:

Two roads diverged in a yellow wood,
And sorry I could not travel both
And be one traveller, long I stood. . .

We can easily imagine a hiker literally in this situation, trying to determine which road to take. But Frost's poem is about more than just that literal meaning of navigating through the woods. Our narrator is regretting more than just not traveling down that one particular road. The roads here are symbols for actual choices in life.

Have you ever been faced with a tough choice and felt sorry you couldn't try out both options? Maybe you had to choose between marrying Jane, a beautiful supermodel, and Sally, a glamorous movie star. They may seem like equally good options, and there is, regrettably, no way in the present to know which path would turn out better down the road in the future. The poem's narrator continues:

Oh, I kept the first for another day!
Yet knowing how way leads on to way,
I doubted if I should ever come back.

Again, many of us have experienced moments like this, perhaps thinking, well, if things don't work out with Jane, I'm sure I could just go back and try things out with Sally. Most of us know, however, that life doesn't really work that way (Sally is not likely to be just waiting around). Frost tells us that keeping one path for another day may seem like a great idea, but with roads, just as it is in life, 'way leads on to way,' and we're unlikely to be able to backtrack to our exact original starting point.

As a side note, don't be fooled by the common misreadings of this poem. Frost's narrator doesn't actually take a road less traveled, as he tells us that they were both worn 'really about the same;' there was no good indicator of which path he should take. This poem is actually all about the symbolism of the common occurrence in life of getting to make only one choice and regretting the inability ever to go back and check out where the other path would have led.

Two literary techniques used often in poetry that are pretty similar to one another are similes and metaphors. A simile is a comparison between two things using the words 'like' or 'as.' Rather than using the term 'like' or 'as' to compare two things, a metaphor is a direct statement that one thing is another thing.

Another common literary technique is personification; with this technique, a thing or an animal, or an aspect of it, is described as though it were a person. Finally, with symbolism, someone or something stands for something else. It's through this technique that many poems convey deep meaning and significance beyond what's straightforwardly described on the page.

Introduction to Romantic Poetry: Overview of Authors and Works

Introduction to 17th- and 18th-Century Literature: Major Authors and Works

Robert Frost Poetry Analysis: The Road Not Taken and Other Poems

Song of Myself by Walt Whitman: Summary, Themes & Analysis