Chloe has a big decision to make. Her business is doing pretty well, and she thinks it might be time to expand. But to do that, she needs to take on a business loan. If the expansion is a good decision, that loan will pay off. But if it's not a good decision, it could bankrupt her business. What should she do?

Business owners face decisions every day, from whether or not to expand, what materials to use, how their logo and website should look, and even what pens and pencils to stock in the office! So, how can someone like Chloe make the right choices? There are several ways to make decisions. Often, the first thing that happens is that a business owner analyzes different possible paths. To do that, many employ decision trees or payoff tables. To help Chloe out in her decision-making process, let's look at both options. 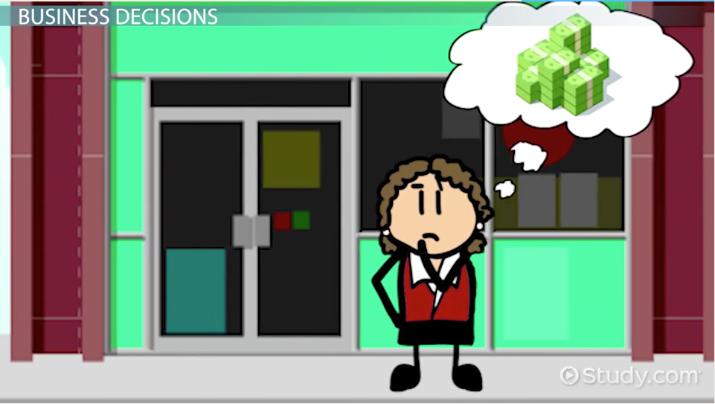 Coming up next: Expected Values of Perfect Information in Business

Chloe needs to figure out whether or not to take out a loan and expand her business. But it's a complicated decision, and there are a lot of things that can cause it to be a good or bad decision in the long run. One way to analyze the possible outcome of a decision is to make a decision tree, which is a diagram representing all possible outcomes of a solution. It's called a decision tree because once the diagram is finished, it kind of looks like a tree.

There are several major elements to a diagram tree. The first are little squares. These represent decision alternatives, or choices that a business can make. For example, the first square in Chloe's decision tree will likely represent the choice of whether or not to take out a loan and expand.

Of course, each decision path leads to another decision. For example, if she chooses to expand, then she's left with decisions like how big of a loan to take out and which departments to invest in first. Each time she makes a decision, more paths (or branches on the tree) emerge from the square representing that decision.

But squares and branches aren't the only thing on Chloe's tree. Remember that there are some things that can influence whether a decision ends up being a good one or a bad one. Some of these are out of her control. For example, what if she chooses to expand, and then the economy tanks and she loses customers? Future events that are not under the control of the business are called states of nature and are represented on a decision tree by circles. They, too, lie along a branch and have multiple branches flowing from them.

Let's go back to Chloe's decision tree for a minute. She first decides that yes, she wants to take out a loan and expand. That takes her to her next decision: how big should her loan be? Her choices are $1 million, $500,000, or $300,000. Each of those choices have branches going out from them.

At this point, she's faced with a state of nature: the possibility of the economy tanking. For the state of nature of 'economy tanking,' there are a few possibilities: it can stay strong, there can be a small recession, or a huge depression. If she takes out a $1 million loan and the economy crashes, she's in a bad place. But, if she takes out a $300,000 loan and things go south, she's not as vulnerable. But for each loan value, she'll have to analyze the outcomes of the three possibilities of the economy crashing.

Chloe will want to continue creating branches (or paths) and adding in decision alternatives and states of nature until she runs out of possibilities. Then, she can go back through her decision tree and try to figure out which outcomes are most likely and also compare the worst- and best-case scenarios.

A decision tree seems like it can help Chloe make an informed decision, but it also seems a little overwhelming to her. All those decision alternatives and states of nature make her decision tree very big and scary looking! Is there another way?

If decision trees aren't really your thing, there is another way to analyze the outcomes of decisions. Payoff tables show the outcomes for different combinations of decision alternatives and states of nature in a table. Notice that in a payoff table, Chloe will be looking at specific combinations. For example, she might want to limit her analysis to what loan (if any) to get and how the different economy outcomes combine with each size loan.

The payoff of a decision can be profit, cost, time, distance, or another measure that Chloe wants to look at. Let's say that Chloe wants to see what her profit will be in three years. She decides to create a payoff table to analyze her possible decision.

Along the left side of the table, you'll notice that Chloe has labeled each row according to which decision alternative it represents: taking out a $0 loan (that is, no loan at all), a $300,000 loan, a $500,000 loan, or a $1 million loan. Then, along the top, she labels the columns according to various states of nature: the economy stays the same, goes into a small recession, or goes into a huge depression.

In each cell, she fills in what her profit will be in three years if she makes that decision and that state of nature occurs. For example, if she takes out no loan and the economy stays the same, her company will likely make $400,000 profit in three years. If she takes out a $500,000 and the economy goes into a huge depression, her profit will likely be -$150,000. That is, she'll lose $150,000 that year.

By filling in the payoff table, Chloe can see the different payoff of different decision alternative and state of nature combinations and make an informed decision based on the information in the table. It's a lot simpler than a decision tree, which means that it might not be as accurate for some problems. Chloe just has to decide if she's willing to give up some accuracy for simplicity or if she'd rather go with the more complicated, but perhaps more accurate, decision tree.

Another way to analyze the outcomes of decisions is with a payoff table, which shows the outcomes for different combinations of decision alternatives and states of nature in a table form. The payoff of a decision can be profit, cost, time, distance, or another measure. Payoff tables are simpler than decision trees, but also less complex, which means that they might not be as accurate for some problems.

The Structure of a Waiting-Line System & Queuing Theory in Business

How to Calculate Payoffs to Option Positions

Just in Time (JIT) Inventory Advantages & Examples | What is a JIT?