Thalia loves to read novels, but lately, her teacher has been on her about reading more short stories. Thalia isn't sure about that. She knows what to expect when she opens up a novel, but how are short stories different? How can she analyze a short story?

A short story is a piece of narrative fiction that is shorter than a novel. Usually, this means that it is shorter than 20,000 words, though some can be much shorter than that. It's kind of a miniature novel, because it has some of the same elements, like characters and setting and plot, which a novel has.

To help Thalia feel more comfortable with short stories, let's take a closer look at some of the important elements of short stories. 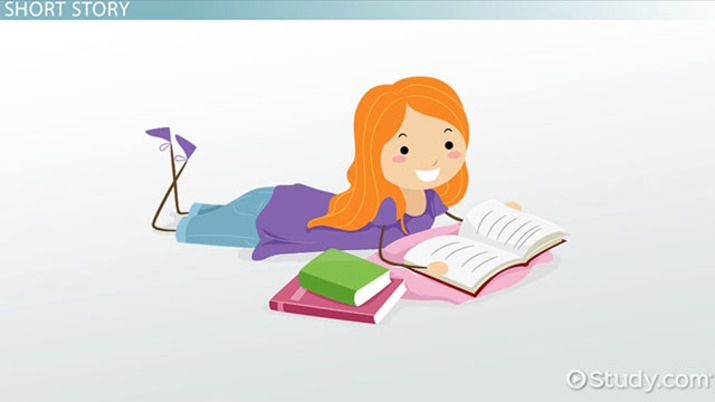 Try it now
Back
Coming up next: Analyzing British Drama: Techniques & Plays

Ever notice how sometimes, when you get an email from someone, you can't tell what exactly they mean? For example, last year, Thalia got an email from her friend and she couldn't tell if her friend was being sincere or sarcastic when her friend said that she liked Thalia's boyfriend.

If Thalia's friend had said that in person, Thalia wouldn't have had any problem figuring out what her friend meant. That's because she would have been able to hear her friend's tone of voice.

Believe it or not, short stories also have a tone. In a short story, tone is the language the author uses to create the mood of the piece. And just like tone of voice, the tone of a short story can be many different things: absurd, serious, hostile, or threatening. And this can create a variety of moods: happy, sad, angry, and scary.

To understand tone a little bit better, check out this paragraph from Neil Gaiman's award-winning short story 'How to Talk to Girls at Parties':

'I didn't like beer, not back then. I went off to see if there was something I wanted to drink. On the kitchen table stood a large bottle of Coca-Cola, and I poured myself a plastic tumblerful, and I didn't dare say anything to the pair of girls who were talking in the underlit kitchen. They were animated and utterly lovely. Each of them had very black skin and glossy hair and movie star clothes, and their accents were foreign, and each of them was out of my league.'

Now, compare that to the opening paragraph of E.M. Forster's story 'The Life to Come':

These two pieces sound very different, don't they? The tone of the pieces is very different. Gaiman's story has an informal tone, meaning that it is casual and sounds like one person talking to their buddy.

On the other hand, Forster's story has a more formal tone, meaning that it sounds a little bit more fancy and literary. Forster uses words like 'whence' and more complex sentence structure to give his piece the formal tone. In contrast, Gaiman uses normal words and simple sentences to sound more laid-back and informal.

Thalia is impressed by how much tone can color the way a person feels about a story. When she reads Gaiman's story and then Forster's, she gets a very different view of things. There are two other major things that impact the reader's experience when reading a short story: dialogue and setting.

Dialogue is a conversation between two or more characters in a story. Whenever people are talking, and you see the quotation marks, you know you're reading dialogue. Like tone, dialogue can be very different from one story to the other. Check out the dialogue in the opening lines of Gaiman's story:

Like the paragraph we looked at before, that dialogue is pretty simple and straightforward. It really sounds like two boys talking to each other.

Compare that to this bit of dialogue from Oscar Wilde's short story 'The Happy Prince':

'Swallow, Swallow, little Swallow,' said the Prince, 'will you not stay with me for one night, and be my messenger? The boy is so thirsty, and the mother so sad.'

'I don't think I like boys,' answered the Swallow. 'Last summer, when I was staying on the river, there were two rude boys, the miller's sons, who were always throwing stones at me. They never hit me, of course; we swallows fly far too well for that, and besides, I come of a family famous for its agility; but still, it was a mark of disrespect.'

But the Happy Prince looked so sad that the little Swallow was sorry. 'It is very cold here,' he said 'but I will stay with you for one night, and be your messenger.'

See how Wilde's dialogue seems more formal than Gaiman's? There are no contractions in Wilde's dialogue; his characters say 'it is' instead of 'it's.' Not only that, but they use phrases like 'will you not' and 'it was a mark of disrespect.' This gives Wilde's story the feeling like it takes place a long time ago, like it's a fairy tale.

In contrast, Gaiman's story feels like it's happening right now, down the street. It feels very contemporary and normal. In fact, Thalia feels like it's the kind of conversation she would have with her friends.

The other thing that can influence the way a reader experiences a story is setting, or when and where the story takes place. Setting can have a profound impact on tone: just think about the line, 'It was a dark and stormy night.' That sets the tone of a piece really quickly!

To understand setting better, let's look back again at the opening paragraph of Forster's story 'The Life to Come.'

That's quite a setting! It takes place in a vast, dark forest. That makes the story feel almost scary, like we're lost in the middle of this forest at midnight.

'In Egypt the sun is warm on the green palm-trees, and the crocodiles lie in the mud and look lazily about them. My companions are building a nest in the Temple of Baalbec, and the pink and white doves are watching them, and cooing to each other.'

Now, compare that to the description of the town square below him.

'There stands a little match-girl. She has let her matches fall in the gutter, and they are all spoiled. Her father will beat her if she does not bring home some money, and she is crying. She has no shoes or stockings, and her little head is bare.'

Notice that Wilde has the swallow describe Egypt as a place of warmth and happiness, one where everyone is happy and taken care of. In contrast, the town where he is includes a match-girl, who is very poor. There's no greenery here, or happiness, and later, he describes the town as cold and rainy. Want to take a guess which place the swallow would rather be?

Without even having to tell you, Wilde has painted a picture with setting to let you know where the swallow wishes he was.

A short story is a piece of narrative fiction that is shorter than a novel. In short stories, tone is language that sets the mood of the story. An informal tone is one in which the language in the story is casual, whereas a formal tone has a more literary feel to it. Dialogue is when two or more characters are speaking, and setting is where and when the story takes place. Both dialogue and setting can contribute to the tone of a short story.

Lesson At A Glance

An Ounce of Cure by Alice Munro: Summary & Analysis

Elements of a Short Story | Plot, Setting, and Characters

Novella vs. Novel | Types of Fiction

Short Story Examples & Characteristics | What is a Short Story?

The Gift of the Magi by O. Henry | Analysis, Plot & Summary