Anarchism is a controversial philosophy that has been accepted and rejected throughout history. In this lesson, dive into the definition of anarchism, its different types, and its history. Updated: 10/19/2021
Create an account

Arnie is an anarchist. Anarchism is a philosophy that argues that individuals should be free to pursue their interests without being coerced in anyway by anyone, especially the government. In fact, anarchists, like Arnie, believe that governments are unjust and completely illegitimate. Anarchists argue that nearly all states have been established illegitimately through violence and conquest.

For example, the United States, a democratic republic, was established through a revolutionary war and expanded through the help of military conquest, including the Mexican War and the so-called Indian Wars during the westward expansion. A government's injustice, according to the theory, is due to its intrinsic coercion and violation of individual liberty and autonomy. In the final analysis, anarchists believe that no government is better than any government. 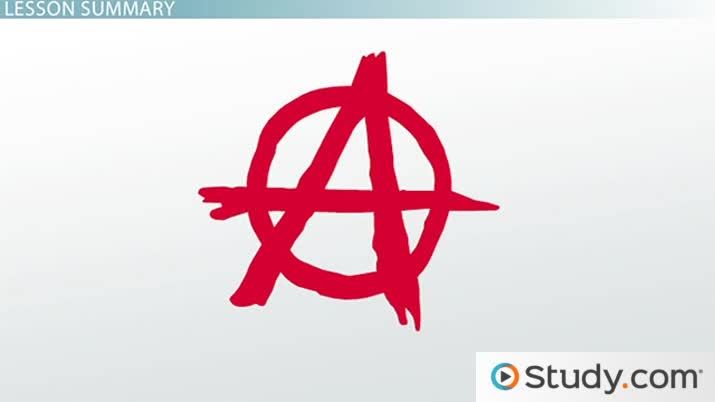 Coming up next: Fascism: History, Ideology, and Influence

Anarchism is a broad philosophy, and not all anarchists have the same focus and beliefs. Arnie decides to attend an anarchist convention. At the event, he runs across several different types of anarchists that hold surprisingly differently beliefs:

The history of anarchism is probably co-extensive with the history of government. You can trace elements of anarchism in Chinese Taoism and Greek Stoicism. However, anarchism as a coherent movement started in the 19th century until the failed Spanish Revolution in 1939. A major theorist was Proudhon, who was famous for saying, 'Property is theft.' During this time, anarchism was closely identified with the working class. Marxism also heavily influenced the movement.

This era of anarchism also involved illegal activity and terrorism, including assassinations of heads of state in France, the United States, Russia, Spain and Greece. Property owners and military officers were also targeted. However, the state gave better than it got against anarchists through imprisonment, torture, execution and mass murders. Anarchists were also subjected to special laws directed specifically towards them.

An anarchism revival occurred in the 1960s. While Marxism was still very influential to the movement, the revival was also influenced by environmentalism, feminism and pacifism. The revivalists advocated the abolition of capitalism; patriarchy, or a male-dominated society; and the state. However, the organization of activities typically had no formal hierarchy or leaders and was rather egalitarian with participative decision-making.

Some mark the beginning of the contemporary anarchist movement with the collapse of the Soviet Union. The newest element to the contemporary movement is anti-globalization. These neoanarchists, or contemporary anarchists, acknowledge the need to oppose not only the traditional 'foes' of state, war, capitalism and neoliberalism, but also racism, sexism, homosexual discrimination and ageism, with the opposition taking place not only locally but on a global basis.

Let's review what we've learned. Anarchism is a diverse set of philosophies that argue individuals should be free to pursue their interests without being coerced in anyway by anyone, especially the government. In fact, anarchism advocates for the elimination of the state and its government.

We can trace the roots of anarchism back to antiquity and Chinese Taoism and Greek Stoicism. The first significant wave of anarchism as an influential movement was in the late 19th to early 20th century and was closely identified with the struggling working class of the Industrial Revolution and Marxism. This period was marked by acts of violence perpetrated both by and against anarchists. The second movement occurred in the 1960s and was influenced not only by Marxism but also environmentalism, feminism and pacifism. The contemporary movement has become pluralistic and global in nature.

After watching the video, try to:

The Authoritative Allocation of Values