Digestion begins in the mouth but continues in the stomach. Explore the anatomy and physiology of the stomach, like the pyloric sphincter, rugae, mucosa, and gastric pits and glands, and learn how the automatic nervous system controls them. Updated: 08/26/2021
Create an account

We previously learned that food starts the process of digestion in your mouth. This partial breakdown of food is accomplished by both the chewing action of your teeth and the enzymes found in your saliva. The main purpose of this initial digestion is to turn the food mass into a slippery mix that can be easily swallowed. When you are ready to swallow, your tongue pushes the food into the pharynx, which is commonly referred to as your throat. From there, the food is propelled down your esophagus, where it's ready for the next stage of digestion within the stomach. In this lesson, you will learn about the anatomy of the stomach and how digestion within the stomach is activated. 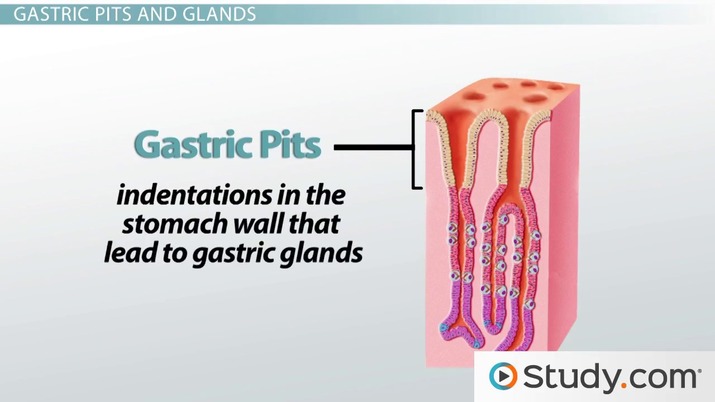 Coming up next: What is the Small Intestine? - Anatomy and Functions

We see that the stomach is the shape of a backward 'C,' and it sits a bit off to the left of your abdominal cavity. We previously learned that food enters the stomach through the lower esophageal sphincter, which is a ring of muscle that acts like a gatekeeper and controls the passage of food from the esophagus to the stomach. In the same fashion, food exits the stomach through another sphincter. The sphincter that controls the passage of food out of the stomach is called the pyloric sphincter. The pyloric sphincter gets its name from the fact that it lies near the pylorus, or terminal section, of the stomach. Food must be broken down to a near liquid form in order to pass through this pyloric sphincter. The sphincter never opens very wide, and it only allows about three milliliters or less of stomach contents to squirt through at a time. This strict regulation of food helps keep the small intestine, which is the next stop for food, from becoming overburdened.

Your stomach is about 10 inches long, but its diameter depends on how much is inside. The stomach has a tremendous ability to stretch. In fact, it can stretch to hold up to a half gallon of food or more. When your stomach is empty, it collapses in on itself, and we see large folds that we call rugae. The term rugae refers to a series of ridges or folds produced by the folding of the walls of an organ. In fact, the singular word 'ruga' is Latin for 'fold'.

The mucosa is the moist membrane layer that lines the inside of the stomach. In fact, the mucosa lines the entire length of your digestive tract. So we can say that the mucosa is the layer of the digestive system that comes in direct contact with the food mass. The word 'mucosa' is Latin for mucus, and while you might not like thinking about mucus coming in contact with your food, it will help you remember the term. Mucus actually plays an important protective role within the digestive system and often protects the digestive lining from acids. The mucosa consists of many epithelial cells. We previously learned that epithelial cells typically form closely packed layers of cells, but epithelial cells vary slightly throughout the body, which helps them perform different functions. In the stomach, we see simple columnar epithelial cells, which are defined as a single layer of tall cells that fit closely together. These epithelial cells are called 'simple' because they are only one cell layer thick. They are also tall and resemble columns. These two features will help you remember their name. These cells are specialized to help deal with different conditions needed for digestion. Specifically, these epithelial cells produce many of the secretions needed to help digest your food.

The mucosa of your stomach is dotted with millions of deep gastric pits. The term 'gastric' refers to stomach, and we see that gastric pits are simply indentations in the stomach wall that lead to gastric glands. Gastric glands are the glands, or groups of cells, in the wall of the stomach that secrete components needed for digestion. These secretions are important for the chemical breakdown of many of the foods you eat, and later we will learn more about these secretions.

Let's review. The entry and exit of food to and from the stomach is regulated by sphincters. The pyloric sphincter is found at the distal end of the stomach and is the sphincter that controls the passage of food out of the stomach. The stomach has the ability to stretch when it's full. When it's empty, it collapses in on itself creating a series of ridges or folds called rugae. Lining these rugae and the stomach itself is the moist membrane layer that we call the mucosa. The mucosa consists mainly of a single layer of tall cells that fit closely together, called simple columnar epithelial cells. These cells are specialized to help produce digestive secretions.

After working this lesson, you can now:

Physiology of the Stomach and Gastric Juices

Reflex Types & Examples | What is a Reflex?