After food is partially broken down by enzymes in the mouth, it moves through the throat, past the esophagus, and into the stomach for complete digestion. Learn about the anatomy of the throat and esophagus (pharynx, larynx, epiglottis, nasopharynx, oropharynx, laryngopharynx, and lower esophageal sphincter), deglutition, and the importance of peristalsis. Updated: 08/26/2021
Create an account

The digestive system allows us to take in food and break it down into basic nutrients that can be absorbed into the blood and used by the body. We previously learned that the mouth breaks food down mechanically with the process of chewing. We also learned that food is broken down chemically in the mouth with the presence of enzymes in the saliva called salivary amylase.

Once a bite of food is mixed with saliva and broken down by the teeth, it has been transformed into a slippery mass that can be easily swallowed. In this lesson, you will learn about the process of swallowing and the structures of the throat and the esophagus.

To help understand this stage of digestion, let's visit with Frank. Frank recently finished a long day at work, and his stomach was growling. So, he stopped by the local hot dog stand for a quick bite to eat.

Frank's teeth and saliva broke down his first bite of hot dog, and the slippery mass is now ready for deglutition. This is the term used to describe the act or process of swallowing. It will help you remember this term if you note that the root of the word comes from the Latin language and means to 'gulp or swallow.' 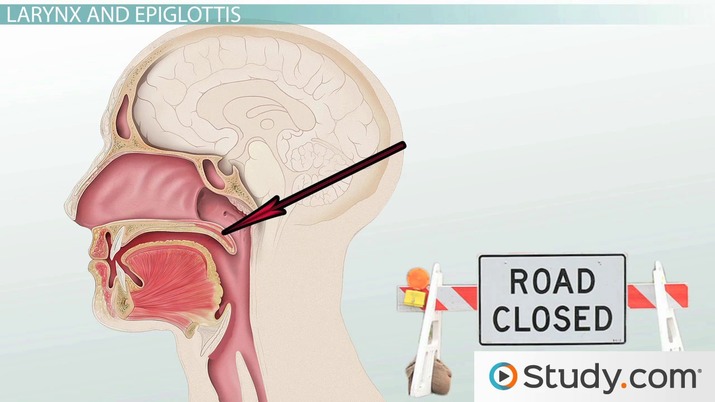 Coming up next: Anatomy and Physiology of the Stomach and Autonomic Nervous System Controls

Divisions of the Pharynx

During deglutition, or swallowing, the partially digested food passes out of the mouth and into the pharynx. The pharynx is what you might commonly refer to as your throat. Anatomically, it is described as the passage that leads from the cavities of the nose and the mouth to the rest of the alimentary canal. So we see that the pharynx is the upper part of the alimentary canal, which we previously learned is the name used to describe the continuous tube that travels through the body and allows for digestion and absorption of nutrients.

An interesting point about the pharynx is that it not only carries the foods and drinks that you consume, it also carries air, which passes through on the way to the lungs. Now, you swallow hundreds of times a day and likely do not give the process much thought. However, there is a well-orchestrated series of events that must happen so that food and drink you swallow doesn't 'go down the wrong tube,' so to speak.

You can see from looking at the different divisions of the pharynx that food must be routed properly to make it down the alimentary canal. For example, if Frank's ability to swallow is compromised, his chewed-up hot dog could go out of his nose. But luckily for Frank, when he swallows, a flap called the soft palate works properly. This is a soft flap of tissue at the roof of the mouth that closes the nasopharynx during swallowing.

When Frank swallows his hot dog, the soft palate rises and directs the food mass down into the oropharynx. The next possible place that the food mass can get off track is if it were to pass into the larynx. The larynx is described as the air passageway to the lungs. Because the larynx contains the vocal cords, many people refer to it as the voice box. When Frank swallows his hot dog, the larynx rises, causing its opening to be covered by the flaplike epiglottis. The epiglottis is a flap of cartilage that guards the larynx during swallowing.

The process usually runs very smoothly, but you may have noticed that it doesn't always work so well, especially if you try to talk while swallowing. When you do this, it's possible to 'short-circuit' your routing mechanism. Because talking requires the larynx to be open, food can manage to enter the respiratory passage. This triggers a reflexive coughing, which forces air out of the lungs in an attempt to expel the food that went down the wrong tube.

Food is moved through the pharynx and then enters the esophagus. This is the muscular tube that connects the throat to the stomach. Your esophagus is about 10 inches long, and it acts only as a passageway for food and drink. The esophagus passes behind the airway to the lungs and in front of the spinal column. It pierces the diaphragm before reaching the stomach.

Food moves through your esophagus by a wavelike series of muscular contractions called peristalsis. The esophagus has two layers of muscles. There's a layer that runs up and down the esophagus in a longitudinal pattern, and a second layer that runs in circles around the tube-shaped organ. During peristalsis, the longitudinal muscles contract and then the circular muscles contract, pushing the food down toward the stomach.

Let's review. After food is chewed and mixed with saliva, it's pushed to the back of the mouth by the tongue where it begins the process of deglutition, which is act or process of swallowing. The slippery mass of food enters the pharynx, which is commonly refer to as your throat, but more completely defined as the passage that leads from the cavities of the nose and the mouth to the rest of the alimentary canal. There are three divisions of the pharynx: the nasopharynx that is continuous with the nasal passages, the oropharynx that lies at the back of the mouth and the laryngopharynx that leads to the rest of the alimentary canal.

The food mass now enters the esophagus, which is a muscular tube that connects the throat and the stomach. From this point on, we see that digestion is under involuntary control and is carried out under the influence of the parasympathetic nervous system, which plays an important role in the digestion of food.

Food is propelled through the esophagus by peristalsis, which is a wavelike series of muscular contractions. At the bottom of the esophagus, the food mass pushes against the lower esophageal sphincter. This is a ring of muscle that leads from the esophagus to the stomach.

After viewing the lesson, you should be able to:

Anatomy of the Throat and Esophagus
Related Study Materials

Anatomy of the Throat, Esophagus & Stomach

Anatomy and Physiology of the Mouth

What do Red Blood Cells Do? | Creation, Life, Anatomy & Facts

Large Intestine Function & Water Absorption | What Does the Rectum Do?

Function & Anatomy of the Muscles of the Face, Neck & Back

What Is Skin Abrasion? - Definition & Treatment